The Pacific Alliance faces the challenges of the 21st Century

Pablo de Carvajal participates at the Latin-American Meeting of the Pacific Alliance, hosted by Telefónica in Santiago de Chile.

Telefónica hosted the IV Latin-American Meeting of the Pacific Alliance, organized by FIE (Fundación Iberoamericana Empresarial) in Santiago de Chile. This meeting was attended by prominent business leaders and government authorities, as well as the closing participation of the country’s Finance Minister Felipe Larraín. The Pacific Alliance’s digital agenda, focused on cybersecurity, legal certainty or digital markets, has been the cornerstone of the debates. 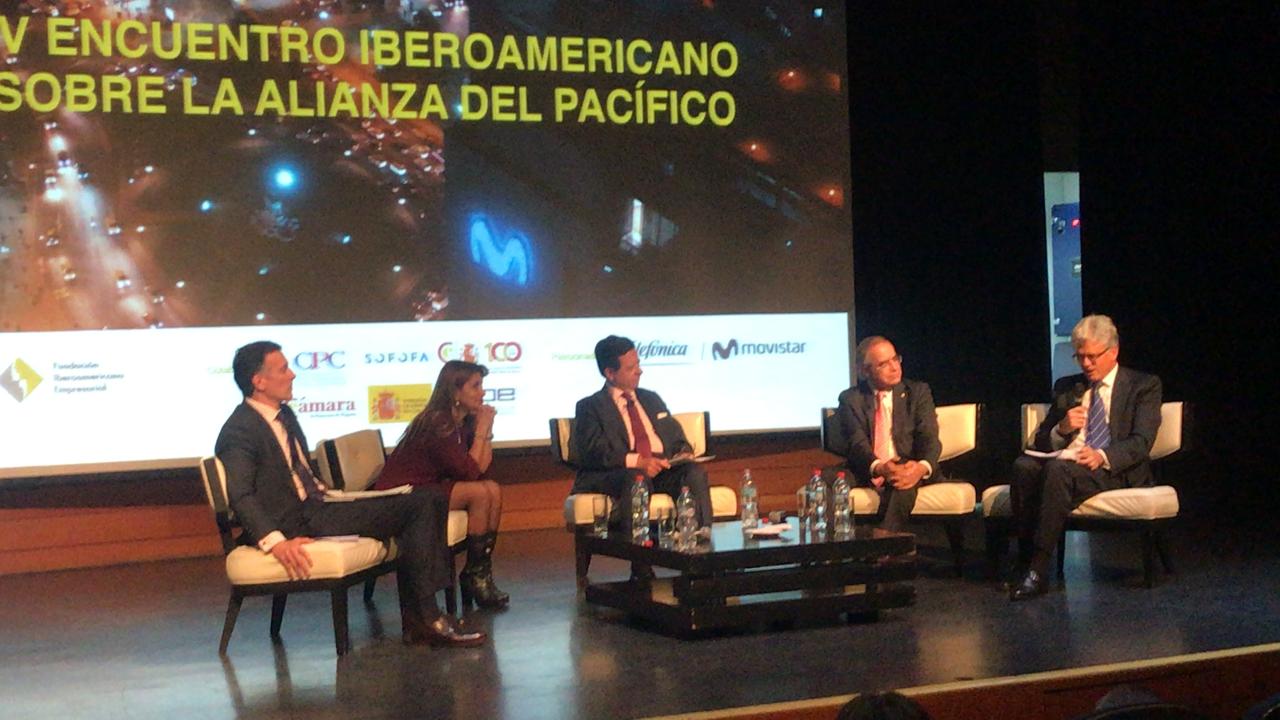 Digitalization is an essential part for the development of national economies will experience in the coming decades. The Pacific Alliance is one of the most prominent regional integration players of Latin-America, bringing together 220 million people and representing 35% of the region’s GDP. Thus, it should act as an enabler of the necessary changes for making the digital transformation a reality in the region. In this context, the Alliance can become a platform for the transformation of the region, both in productivity and in the search for greater well-being and social inclusion by leveraging connectivity and digitalization.

In order to achieve this goal it is fundamental to bridge the digital gap. In Latin America there are about 100 million people without access to connectivity infrastructures. In order to close the digital gap we must act swiftly, by creating legal certainty together with a regulatory framework that promotes investment in connectivity.

In Telefónica we identify five key challenges that ought to be addressed in the digital agenda of the Pacific Alliance, through the implementation of effective public policies.

The region needs a regulatory framework that promotes the investment in connectivity infrastructures. The regulation must be flexible, so telco operators can adapt their business models to bring connectivity to remote areas, as Telefónica has done with the “Internet para Todos” project.

We must keep in mind that fiscal policies have a central role as enablers of these investments. Fiscal pressure on the telecommunication industry in Latin América is a 51% higher on average than the rest of the industries. Tax policies must therefore be adapted to promote a fiscal contribution that is fair and balanced between the different stakeholders. These changes would allow the development of the digital economy, which enabled by connectivity would increase the region’s GDP.

Pablo de Carvajal: “Appropriate regulatory conditions, the necessary legal certainty and the recovery of growth pave the way to further investment in connectivity. At the same time, the usage of the Universal Service Funds must be rethought, and the legacy networks must be transformed.”

Given that the mobile data traffic demand is forecasted to increase dramatically in the upcoming years, it is necessary to rethink the spectrum policies. The new spectrum policy must be articulated around two main ideas: connectivity and innovation. The region needs to promote investment in the development of 4G, to generate a strong base to support the adoption of 5G.

Pablo de Carvajal: “Spectrum must be made available to the market at the right time, with reasonable conditions and costs, long-term or indefinite licenses, and looking to end its fragmentation. At the same time, private property rights must be assured through a strong rule of law and legal certainty that mimise the investment risk.”

The Chilean model is an example of good practices in the region, because of the definition of a spectrum policy that promotes the deployment of the network over financing through public auctions. This has allowed Chile to become the country with the best connectivity network in the region, as GSMA has pointed out, regardless of its complicated orographic conditions.

Policies and regulatory frameworks must be redefined to ensure a sustainable digitalization. The political and regulatory environment must ensure a level playing field for conventional services, promoting fair competition in the digital markets.

Pablo de Carvajal: “It is necessary to promote horizontal regulations to avoid unfair market decisions in topics such as tax policies, user protection or data privacy”

Legal certainty is a crucial step for Latin America to be able to attract investment and generate trust. In order to reinforce legal certainty, we believe that concessional models must evolve to service licenses that avoid distortions between operators. Asset reversibility clauses must be interpreted in a restrictive manner to avoid uncertainty.

Pablo de Carvajal: “Strengthening legal certainity is key to attracting new investments in networks. Investors need clarity and stability in order to make investment decisions.  It is necessary to update the obsolete concession regimes and analogical regulations that are a source of insecurity and litigation”.

We need a new competition policy that encourages the consolidation of markets that require strong investments and capital expenditures. Asymmetric measures that artificially favour the entry of new players into the markets have been shown to have negative effects on supply and quality of service.

Pablo de Carvajal: “A new competition policy must help the consolidation of markets to facilitate new investments, avoiding asymmetric measures that artificially favour the entry of new players, while at the same time allowing the competitiveness of investing agents in the market”.

At Telefónica, we believe that any agenda aimed at transforming the economy should consider the design of a regulatory framework that attracts investment to the countries of the region. This environment must have a level of legal certainty and security to foster the sustainable development of connectivity and the new digital ecosystem.