The impact of Big Data on society

Big Data is one of the hottest topics around at the moment, with growth that is expected to be exponential. How will this affect society? And, more importantly, can data help to improve people’s lives? Traffic in mobile data grew by 70% in 2012, according to a study carried out by Cisco entitled  “Visual Networking Index: Global […] 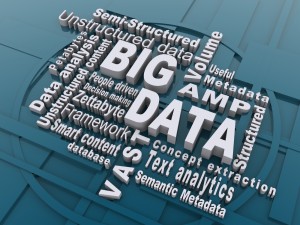 Big Data is one of the hottest topics around at the moment, with growth that is expected to be exponential. How will this affect society? And, more importantly, can data help to improve people’s lives?

Traffic in mobile data grew by 70% in 2012, according to a study carried out by Cisco entitled  “Visual Networking Index: Global Mobile Data Traffic Forecast Update, 2012–2017” and the European Commission states that every minute, around the world, 1.7 million megabytes of data are generated, the equivalent of the capacity of 360,000 domestic DVDs and, according to its estimates, the Big Data sector is increasing at a rate of 40% a year. Furthermore, it is calculated that by 2015 Big Data will generate a market of 132 billion dollars, as revealed by Susana Blázquez in her article published in the El País newspaper, called “The manna of data”.

This boom can be translated into improvements in the way we manage different aspects of our society, from catastrophes on the planet, health, agriculture and productivity, to the environment, education or open government, amongst others. The key is in finding a way to use these large quantities of data in a responsible way for the benefit of society.

One such example, as described in an article in “The Guardian” called Combating global epidemics with big mobile data by Nuria Oliver, director of scientific research at Telefónica Digital, is using the masses of data as an excellent ally against world pandemics.

It is precisely along these lines, and in an attempt to find the real benefits of using Big Data, that Telefónica has carried out a number of studies, notable amongst which is the use of mobile network data in Mexico to analyse the propagation of infectious diseases. Specifically, there is a case study on the epidemic of bird ‘flu (N1H1) which was rampant on the planet in 2009, killing approximately 250,000 people, although it is calculated that the real figures are much higher than this estimation.

The research team used the logs of calls made on mobile telephones to calculate the number of people visiting popular places such as universities, stations or airports. Using the data anonymously in this way, the aim of the study was to learn about how human beings move in a pandemic crisis.

With all this data, and thanks to simulation programs, the study focussed on creating an epidemiological model based on human mobility and, using these resources, simulate how a disease of this type spreads and thereby measure the impact of government alerts in cases of epidemics. After different analyses, it could be seen that the Mexican government’s drastic decision to close certain infrastructures was correct, as the simulations showed a reduction in the mobility of the population of between 10 and 30%, which translated into a 10% reduction in the number of people affected by the disease.

In “The manna of data”, Blázquez gives examples of how some cities have adopted Big Data to improve the lives of their citizens. Different cities have benefited from this use, such as Las Vegas (United States), which reduced the rate of violent crimes by 6.4% and the number of intentionally started fires by 8.6%, or Río de Janeiro, which reduced the response time to emergencies by 30%. Also worthy of note is Holland, where the company IBM is developing a system for water monitoring and management designed to save 1 billion euros a year and avoid disasters.

The European Union claims that even in traditional sectors like agriculture, Big Data can have a major impact. How do we imagine the tractor of the future? If this is strengthened with instruments for collecting data on how it works, characteristics of the soil and crops, and in terms of climate, the combination of these data will allow us to improve productivity.

As we can see, Big Data also reaches more traditional sectors, such as agriculture – already mentioned – or livestock, where a number of organisations are making their small contribution to improving productivity. An example of this is the Centre for Agricultural Bioscience International’s Plantwise Knowledge Bank, which uses data to advise farmers and livestock owners, providing them with information on plant and animal diseases. Another of the priority areas of work related to agriculture is the use of big data to work on genetic modification of crops, in order to combat hunger and poverty around the world.

In the area of eHealth, one of the most striking cases is the robot Watson, an artificial intelligence IT system developed by IBM, which is used at the Memorial Sloan-Kettering Cancer Center in New York to search a million and a half patient histories in seconds, to assist with diagnosis.

This is not the only way in which Big Data has an influence on the health of the population, if we approach it on a much more daily level such as the use of the social network Twitter. Thanks to messages like “I have a fever” or others describing different pathologies, geographical analyses can be carried out to identify more quickly and efficiently whether an epidemic is being generated, and allow it to be eradicated much more quickly.

There is no doubt that our society is in the thick of an unprecedented Big Data revolution; it is now up to us to learn how to use this new social tool correctly and respecting privacy, to improve our daily lives.