Telefonica wins My World Communications award by the United Nations

Telefónica has been the winner of the My World Communications Award by the United Nations . The selection committee has highlighted the company's efforts to promote the initiative My World ... 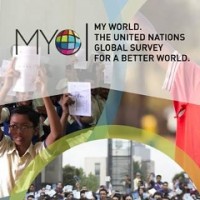 Telefónica has been the winner of the My World Communications Award by the United Nations. The selection committee has highlighted the company’s efforts to promote the initiative My World in Spain.

The campaign has been promoted in different media and was supported by initiatives such as placing a podium signed by Ban Ki-moon, General Secretary of the UN to allow citizens to vote in the Telefónica flagship stores in Madrid and Barcelona and in the headquarters of the Company. Telefónica also aims to support the promotion of the initiative implementation in Latin America and Europe.

The support of the initiative My World has been leaded by the Global Corporate Reputation Management and Sustainability Direction, but the diffusion of the survey could not have been possible without the support and collaboration of the departments of internal and external communications of Telefónica, as well as media area and the support of the different online platforms of the company.

My World is a United Nations initiative based on a short survey, which lets you choose six areas of activity which you believe are a priority to define the post 2015 millennial objectives of a total of 16. The objective if that you decide which areas can represent a major improvement in your life and that of your community.

Currently, more than 5 million people worldwide have replied the survey, which aims to collect the topics that matter most to society. United Nations gives, in this way, the voice to the citizens through an open and consultative process to create the future global development agenda post2015.

This post has been originally published in Spanish in the CR and Sustainability Telefónica Blog.