As announced in a previous post, the 2nd Annual Meeting of IGF Spain was held last Thursday 10th of May at the School of Telecommunications Engineering of the Polytechnic University of... 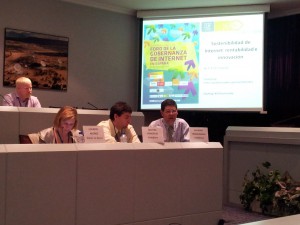 As announced in a previous post, the 2nd Annual Meeting of IGF Spain was held last Thursday 10th of May at the School of Telecommunications Engineering of the Polytechnic University of Madrid (UPM).

IGF-Spain is the national debate forum about Internet Governance in Spain, where all stakeholders interested in developing the Internet participate on an equal footing with the objective of sharing views and ideas on how each interested party could help in achieving the common objective of having a better Internet for all.

In the opening session, chaired by the Spanish Secretary of State for Telecommunications and Information Society, three main aspects were emphasized: open government, the possibilities offered by Internet as driving force behind the economical recovery and the fight of powers that is taking place on the Internet governance model.

The speech of Mr. Alfredo Timermans, Telecommunications Policy Director in the International Office of Telefónica S.A., was directed to cover this last subject. He illustrated the scenario presented this year with the review that the International Telecommunications Union (ITU) is going to undertake of the International Telecommunications Regulations (ITRs) and the effects this could have on the future of the network, businesses and user’s rights in case the ITRs include some aspects related to the Internet. This possible inclusion would mean in fact an increased control of the Internet by the states. An interesting debate followed on the sustainability of the actual Internet business model, where all participants launched different proposals directed specifically to boost innovation and business growth in the Spanish market.

Our company Tuenti also had a main presence in the Children and youngsters session. Here Mr. Sebastian Muriel, from his experience as VP Corporate Affaires, revised the young people’s uses of Internet, mainly the social networks.