This is the list of main Digital Economy reports published in July that I have chosen. July came with the OECD Digital Economy Outlook, but also with some interesting reports on future digital... 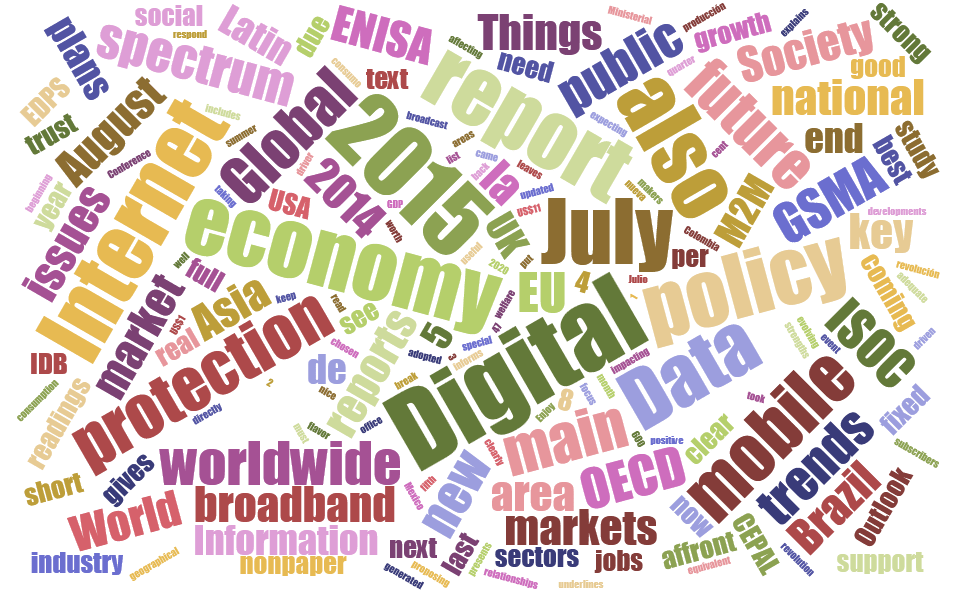 This is the list of main Digital Economy reports published in July that I have chosen. July came with the OECD Digital Economy Outlook, but also with some interesting reports on future digital strategies in Asia, Latin America (in Spanish!), Europe or national plans, without forgetting spectrum and competition policies. Internet Governance was also on the July agenda as well as data protection policy. Enjoy the readings and see you soon for the August publications! 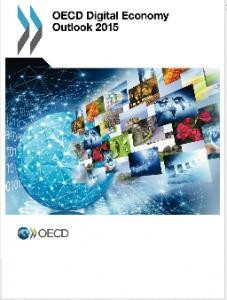 The annual OECD report on Digital Economy is a key report full of useful data from the OECD countries but also from other markets such as Brazil and Colombia in some areas.

The report leaves clearly the relevance of the digital economy as a driver for growth for the economic and social welfare worldwide, impacting all the economic sectors but also our social relationships. It gives data and information on main trends worldwide, the main developments in public and regulatory policy, the broadband national plans adopted with the best practices, the evolution of main technologies, fixed, mobile and broadcast with a special focus on the Internet of Things, without forgetting the importance of trust in the future digital economy. It also gives a flavor of the emerging challenges that policy makers need to affront in this evolving world. A must read. 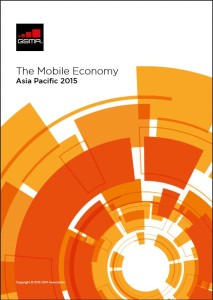 Due to the GSMA Mobile World Congress event in Shanghai, GSMA delivered different interesting reports on the mobile industry in this geographical area. It informs that the mobile industry in Asia Pacific is now worth more than US$1 trillion per year to the region’s economy, with a strong contribution to the economy (US$1.1 trillion to the Asia Pacific economy in 2014), equivalent to 4.7 per cent of the region’s GDP, with over a quarter of this economic contribution generated directly by mobile operators. The perspectives are also very positive expecting 600 million new unique subscribers by 2020.

It also includes a nice infographic with the main data, you can access here. 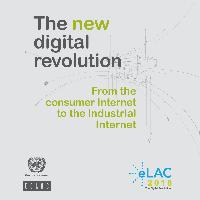 3. The new digital revolution: From the consumer Internet to the industrial Internet, CEPAL, July 2015.

This report has been prepared by CEPAL for the fifth Ministerial Conference on Information Society in Latin America, which took place in Mexico at the beginning of August 2015. The report explains how the new digital revolution is taking place worldwide, driven by the new technologies, how these changes are affecting digital access and digital consumption in Latin America. It also presents the adequate public policies that need to be put in place to respond to the new digital challenges, proposing a unique digital market for this area. 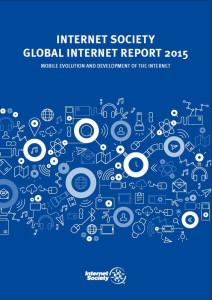 The ISOC report underlines the relevance of mobile for the development of the digital economy and for the access and use of Internet worldwide. The report provides a good overview of this evolution with clear and infographic data. It highlights the strong dependence of mobile apps and indicates the potential problems concerning trust, as they raise questions on security, data protection and competition issues. The importance of online contents is also mentioned. It also contributes to the digital economy policy debate giving its perspectives, forecasts and some policy recommendations for the future management of the digital economy. In our Telefónica Public Policy Blog, we also wrote a post on this report. You can access it here. 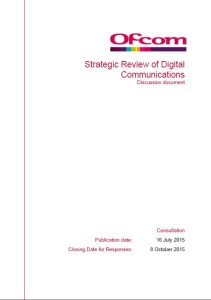 It also indicates future policy challenges in fixed, mobile and content sectors: investment and innovation, competition trends and potential deregulation. There are no proposals of changes yet, as they wish to gather the different perspectives before to do so. The consultation will close on 8 October 2015. 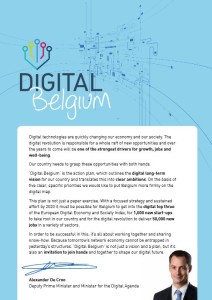 Belgium has delivered its national broadband plan based on five pillars and establishing 20 main priority projects on digital infrastructure, digital confidence and digital security, digital economy, digital government, digital skills and jobs. Support to entrepreneurship & startups are also on the agenda with the initiative “Digital Minds for Belgium”.

This IDB study examines the experiences of spectrum management in four countries with a high percentage of wireless broadband penetration such as Australia, Germany, the United Kingdom, and the United States. It aims to identify the best practices for good regulatory governance. The report highlights that spectrum management and smart decisions in this area is essential and have a direct impact on the quality and cost of future broadband services. 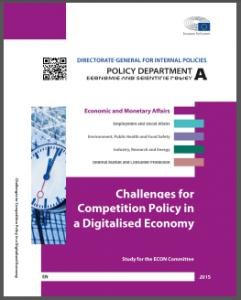 8. Challenges for Competition in a Digitalised Economy, EU Parliament, June 2015.

This study was prepared by the European Parliament Policy Department A at the request of the Committee on Economic and Monetary Affairs (ECON).The report describes the challenges for competition policy in relation to some aspects of the digital economy. It explores the specific characteristics of digital economy markets and how these characteristics impact competition policy. It does not include however issues related to copyright and data protection, even if they are mentioned as challenging issues. 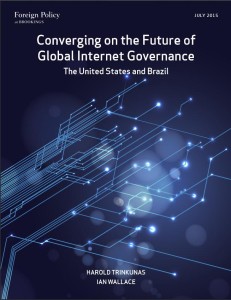 9. Converging on the Future of Global Internet Governance, The USA and Brazil, Brookings, July 2015.

This is a short publication on the links between Brazil & the USA concerning the global Internet Governance and the challenges they have to affront since 2013, date of the E. Snowden revelations. The Brazil decision to host NETmundial in 2014 has shown its interest in this public policy area, its clear support to the multistakeholder process and also a potential leadership for the countries coming from the emerging global powers, such as India, China or Russia. The report also draws some policy recommendations for the future of the Internet governance. 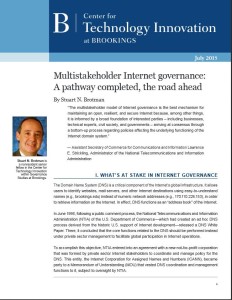 This is a short academic paper concerning the governance of Internet and the existing challenges ahead, concerning mainly the multistakeholder approach and how this approach should be maintained, despite the attempts of some agents to do the opposite.

ISOC has made public its contribution to the United Nations General Assembly’s World Summit on the Information Society review (WSIS+10) non-paper due to be published by the end of August 2015. ISOC highlights the relevance in this process of openness and transparency. We will see more papers related to this issue in September. 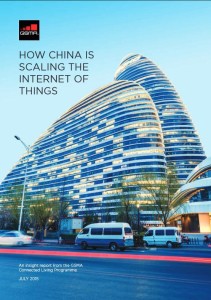 During the Mobile World Congress Shanghai, the GSMA issued a new report highlighting China’s leadership in the worldwide machine-to-machine (M2M) market. According to the report and analyzing the trends of the 4 major mobile operators in the country, China is the world’s largest M2M market with 74 million M2M connections and has now become the global leader in the deployment of the Internet of Things (IoT). 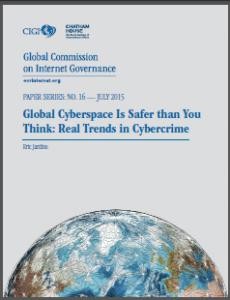 13. Global Cyberspace is Safer than you Think: Real trends in Cybercrime, GCIG, July 2015.

This report tries to bring comfort on the outcomes concerning cybercrime, indicating that in general, cybersecurity is higher than we think, if we consider the large scale of Internet and its growing dimension. It contributes to better analyze and normalize the statistics for cybercrime with various measures. It also issues some policy recommendations to improve IT security worldwide. 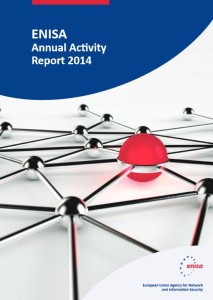 ENISA, the EU agency for cybersecurity, has issued its annual activity report for 2014. In its report, it draws what has been achieved in the last year, to increase cybersecurity in Europe through EU policy and regulatory implementation but also through national plans and main ENISA flagship programmes, all available in its webpage. 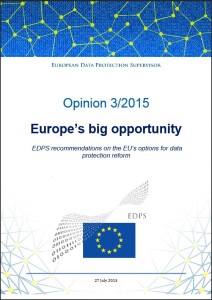 The European Data Protection Supervisor has published its recommendations to the EU co-legislators negotiating the final text of the General Data Protection Regulation (GDPR). This text will be negotiated in the next months to be finalized by the end of 2015. Data protection reform is a key milestone in the European Digital Agenda and it implies relevant challenges to ensure a real protection of EU consumers in a time where frontiers are blurred and services offered are globalized. 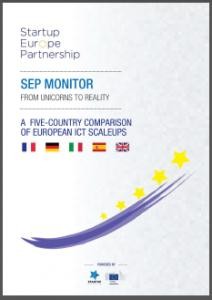 The report identifies and analyzes 990 “scaleups” (those startups that have achieved and succeeded creating jobs and growth) and 40 “scalers” (startups that have succeeded in finding ways of financing at least up to 100 million dollars) from 5 different countries (Germany, Spain, France, Italy and UK) in the last 5 years.