The first week of the ITU’s Plenipotentiary 2014 was mainly taken up with the elections of the new ITU officers Council Members and Radio Regulations Board Members for the next four years... 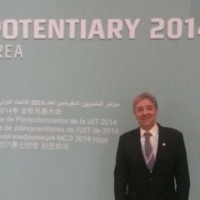 The first week of the ITU’s Plenipotentiary 2014 was mainly taken up with the elections of the new ITU officers Council Members and Radio Regulations Board Members for the next four years mandate. The new Secretary-General is Houlin Zhao, who actually was the only candidate, and Malcolm Johnson, after four rounds of voting, is become the Deputy Secretary-General. All in all, the new elected ITU’s direction shows that Member States have opted for continuity, as 4 out of 5 elected officers were in the previous government team.

During the debates this week, we have experienced a flash back recreating the battle of positioning lived during the WCIT’2012 in Dubai. The Internet is, somehow, the Aquilles’ heel of consensus within the ITU. To date, agreements were not submitted to vote as consensus was the rule. However the wish of some countries to widening ITU’s scope over Internet issues has broken the traditional process of decision making. Again, the western countries reiterate their refusal to increase ITU’s activities and scope on governance issues. The main argument has to do with the existing model of Internet Governance which is the so called “multistakeholder model”. Here a wide variety of organizations, ranging from NGO’s, associations, companies to public administration, participate on equal footing in the decision making process. Developed countries support this model as it has proven to be successful and above all has facilitated the Internet’s widespread across the world. Other countries believe that organizations such as ICANN, IANA or IETF should not govern the Internet but the State and therefore the ITU.

Our public positioning in this respect is favorable to strengthen ITU’s action champ in key areas to promote the access to Internet to everyone worldwide. I’m thinking on promoting the deployment of infrastructures, approving technical regulation or harmonization telecommunications interoperability.

On security issues, the confronting positioning repeats itself. The States which are in favour of broadening ITU’s scope argue that it is more than desirable to obstacle USA global surveillance. That is, the ITU is the appropriate international organization to stop these practices.

In regard to Internet addresses it has emerged a clear discontent towards the way IPV4 addresses have been distributed across the different regions of the world as developing countries have a very limited number of them. Now, with the new assignment of IPv6 addresses all these countries wish to have a Register of IPv6 addresses within the ITU. To me, it is clear that digital ecosystems require flexible and fast moving decision making. It is true that we need a more balanced assignment of IP-addresses. Nevertheless ICANN has understood the impact of the Internet globalization and the need of “equilibrium” among geographies.

All in all, the multistakeholder model is a disruptive path of decision making process in the international scenario. But, with its lights and shadows, it has enabled the development of Internet as we know it today. We, Telefónica, are very committed with the on-going discussions within the great variety of organizations involved in the Internet governance. The International arena is more and more complex, and, to my understanding, the “rise of others” in the international relations is a sound tendency that States cannot stop nor impede.