I was one of the around 1700 people attending this 48th public meeting in Buenos Aires . Due to all the recent developments around Internet Governance ( Montevideo Declaration and Brazil...

I was one of the around 1700 people attending this 48th public meeting in Buenos Aires. Due to all the recent developments around Internet Governance (Montevideo Declaration and Brazil Conference), pure ICANN subjects such as gTLDs, have been somehow in the background and Sao Paulo has been mentioned so many times during these last days that it has competed with Buenos Aires in terms of prominence.

During his opening intervention, Fadi Chehade, CEO of ICANN, informed that a new engagement center will be open in Geneva next month. He underlined that ICANN has been under big pressure during the last months, mainly due to the Snowden affair, and that he is 100% engaged in a plan to enhance transparency and internationalization of the organization. Part of this plan includes the recently launched initiative called 1net designed to open a window for discussion and exchange of opinions on Internet Governance matters, especially in preparation of the Brazil Conference, and the announcement, made during the Board-GAC meeting, of his move to the ICANN offices in Singapore, where he will be based in one month or so.

During the same meeting with the GAC and talking about ICANN internationalization, he explained that already the three main ICANN offices (Los Angeles, Istanbul and Singapore) work almost at the same level. There are other three regional centers (Geneva, Beijing and Montevideo) and two excellence centers in Korea and India. They are working hard to further expand and he mentioned as his personal objective, to have an ICANN office in Africa.

All this internationalization process most probably will have an impact on the Affirmation of Commitments (AoC) of ICANN with the US Administration that will evolve to better reflect this ICANN globalization. The Brazil meeting could contribute to a new definition of the AoC. 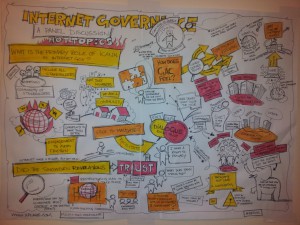 The current situation is as follows:

838 not eligible (for various reasons)

From those invited to contracting, 144 have already signed their contracts with ICANN, being the rest in process. In total, 24 candidatures have been already delegated, that is to say, these 24 new gTLDs are ready to be launched.

Maybe the most important problem to be solved by the applicants is the large number (and we are talking about millions) of unique domain names that most of them have to block until name collisions are solved. ICANN recently undertook a study to evaluate the effect of new gTLDs in the stability of the Internet. This study was made by monitoring searches in the root servers for character strings ending by .gTLD (being gTLD all the 1798 active applications for new gTLDs). For various reasons that ICANN is studying, there are millions of searches of this type. We are talking about searches for chains ending by, for example, .telefonica or .movistar. ICANN now is characterizing the most common problems and will present in the next Public Meeting a set of measures to be implemented in order to solve them.

Another issue that arose from Buenos Aires is the protection of acronyms representing international organizations (IOC, ICRC, etc.). The GAC asked for their protection in the new gTLDs and this was accepted by the ICANN Board. But now the GNSO has unanimously voted a resolution against this protection, reopening the discussion again.

Other problems such as the one with .amazon are still open and waiting for legal advice to the Board. The same applies for .wine or .doctor, for example. Under this umbrella of new gTLDs, the GAC also asked for enhanced protection of children.