Internet Governance was the main subject pervading a good number of sessions in this Public Meeting. The main issue here was all the information related with the Brazil conference. It was... 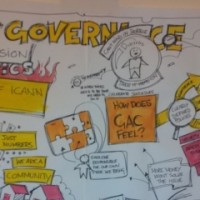 Internet Governance was the main subject pervading a good number of sessions in this Public Meeting. The main issue here was all the information related with the Brazil conference. It was announced a press conference from Brazil to give details on this event, but was postponed one week (26 November) to include representatives from 1net and other governments. In any case the most important information has already been distributed.

First of all there is an official name for the event, a place and date: Global Multistakeholder Meeting on the Future of Internet Governance (Sao Paulo, 23-24 April, 2014)

The meeting objective is to produce a joint declaration on universal Internet principles (as expressed by Virgilio Almeida, chair of the Brazilian CGI – Comitê Gestor do Internet– “a world CGI Decalogue”, something denied by Fadi during this ICANN’s Public Forum) and an institutional framework for multistakeholder internet governance. The framework will include a roadmap to evolve and globalize current institutions, and new mechanisms to address the emerging Internet governance topics. The conference will not try to solve specific topics such as security, privacy, surveillance, etc. It is clear that the main concern of the Brazilians is the “lack of rules and standards in the Internet, as well as not having a central point for governance matters”.

Any party/stakeholder may submit proposals to the conference before 1st of March. All submissions will be open for public comments and afterwards consolidated and presented to the meeting.

V. Almeida will chair the Brazilian side throughout the preparatory processes and CGI will act as secretariat for the meeting. Brazil is forming a global multistakeholder steering committee to organize the event.  The committee will include representatives from CGI, the Brazilian government, and representatives of 1net (global technical, academic, civil society, and business communities).

1net is a new structure created by ICANN and other Internet organizations (such as ISOC, for example) in preparation for the meeting. Up to now, 1net is no more than a mailing list to get input from the Internet community, headed at least nominally, by the Director of AFRINIC, the Internet address registry for the African region.

Four committees will be formed to ensure the success of the meeting:

1.            High-Level Multistakeholder Committee. Will set the objectives of the conference and includes 8 ministerial level governmental representatives (Brazil and, most probably Germany, India, Ghana, Turkey, UK or Australia, all of them selected by Brazil), and 8 Internet community senior executive representatives (selected by 1net, including 2 from industry/business; 2 from civil society; 2 from technical organizations; 1from academia; and 1 from NGO).

2.            Executive Multistakeholder Committee. This committee is responsible for the event organization, defining conference purpose/agenda, managing invitations, organizing inputs received into a coherent set of proposals, managing conference proceedings and process, and directing all communications activities. This committee will include 6 governmental representatives (Brazil, CGI, and other government representatives to be selected by Brazil, most probably including the EU and South Korea) and 6 Internet community representatives to be selected by 1net (2 from industry/business; 2 from civil society; 2 from technical organizations).

3.            Logistics/Organizing Committee. This is the CGI team that will oversee meeting management.

4.            Governmental Advisory Committee. Participation in this committee will be managed by Brazil to include any other governmental representatives who wish to provide input/advice to Committee 1.

Brazil will cover all meeting expenses although 1net could organize some kind of found to support parties from developing countries.

The community expressed some doubts on how representatives in the Committees should be selected and asked for the possibility to attend the Brazil meeting in an open way, as in ICANN or IGF meetings. Some proposed to be present in multistakeholder national delegations. There were also fears of this meeting killing the IGF. Fadi doesn’t believe that and remembered that future IGF editions have been already accepted by Turkey, Brazil and Mexico. Another issue raised by a good number of people was the opposition to having a set of universal Internet principles, as they consider diversity one of the main assets of the Internet.

One of the most important inputs to this meeting will be the one produced by the High-Level Panel on the Future of Global Internet Cooperation that ICANN has set up in partnership with The University of Southern California / Annenberg Foundation and the World Economic Forum. The Panel’s first meeting is scheduled for December 12 – 13 in London and plans to release a high-level report in early 2014 for public comment. The report will include principles for global Internet cooperation, proposed frameworks for such cooperation and a roadmap for future Internet governance challenges, for the Brazil meeting consideration.

President Toomas Ilves of Estonia has agreed to serve as the group’s Chairman with Vint Cerf serving as a vice-chair and ICANN providing the secretariat. Other panel members are:

Additional members could be confirmed. During the GAC-Board meeting, some governments asked the Board on the criteria followed to select these representatives and some argued that the need of this Brazil meeting reflects the lack of concrete results to solve current Internet Governance problems after 8 IGFs.

ICANN is preparing its Five Year Strategic Plan, to be approved by the Board after April 2014. To help preparing this Plan, ICANN has set up four Strategy Panels:

All of them will act as advisors to the Board and produce documents for consideration. The most interesting in terms of the Internet Governance debate is the one chaired by V. Cerf. Its objectives are:

It will have its first meeting in London (13 December) and will produce a draft output by January 15 and a final one by January 31 with a public webinar in mid-January. After that it will be open to public comment until March 31 and then incorporated to the ICANN’s Strategic Plan. There will be a dedicated web page, e-mail for input (ioepanel@icann.org) and wiki.

Main discussions here were on the use of funds raised as result of domain auctions. It seems that they are going to be placed in a dedicated fund. Another debate was centered in the need to limit auctions to commercial conflicts, excluding then other type of conflicts. A public consultation will be made to gather opinions.

Again, there was an interesting debate on the need of a unique Internet Governance model.

Finally, some Argentinian associations and speakers asked ICANN to refrain of granting country code TLDs to the Malvinas islands, as it will go against UN resolutions.

The next Public Meeting of ICANN will be held in Singapore from 23 to 27 March, just few weeks before of the Sao Paulo event. We will follow the debate so stay with us!