When using the term Transatlantic Relations we tend to narrow its different dimensions to the particular US-Europe bilateral relationship at the economic level.  The Transatlantic Economy...

Director, Head of the Brussels Office of Telefónica 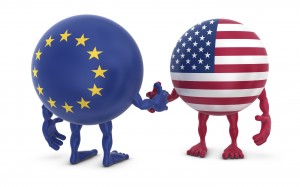 When using the term Transatlantic Relations we tend to narrow its different dimensions to the particular US-Europe bilateral relationship at the economic level.  The Transatlantic Economy is generally studied focusing on cross border trade in goods and services, foreign direct investment and jobs mutually generated between the US and Europe[1].  Knowledge, understood as reciprocal sources of R&D spending between these two parties, is another component of this relationship.  But not only goods, services, capital, people and knowledge flow across the Atlantic, so do ideas. This is a reality all the more evident at the political level, in the specific relationship between the United States and the European Union.

The US and the EU have built an array of institutional mechanisms, such as the High Level Regulatory Cooperation Forum that facilitate the interaction of policy makers and regulators on topics such as transparency, public consultation, impact assessment methodologies, simplification and risk assessment issues. These are all good steps in terms of aligning the decision-making process across the Atlantic.  Further steps can be taken with the recent Executive Order signed by President Obama on “Improving Regulation and Regulatory Review” to promote a 21st Century Regulatory System, and its emphasis on cost-benefit analysis and oversight.

However, the benefits of a flow of ideas on a more transparent, participatory and accountable policy making process across the Atlantic may be weakened if the input used on it is oriented towards a certain substance outcome and is not “based on the best available science”- as called for in the referred Executive Order.  That seemed to be the case for instance with the Berkman Center Study that the FCC requested in 2009 to review the existing literature and studies about broadband deployment and usage throughout the world as a reference for the National Broadband Plan.  In line with the agency’s majority overly pessimistic view that the US is lagging behind other nations in broadband deployment and adoption, the draft study pointed to a co-relation between “open access” policies –such as unbundling in Europe- and broadband penetration as a factor to explain this laggard position for the US in the broadband rankings.  The flaws of the econometric analysis of this draft study were extensively elaborated upon by Robert Crandall, Everett Ehrlich and Jeffrey Eisenach and the final version of the Berkman report introduced a caveat recognizing that current available data is not capable of delivering such certainty on the correlation between unbundling policies and broadband penetration.  In any case this example shows the perils of policy flows across the Atlantic when cherry-picked to favour a certain outcome.