The Spaniard, Asier Arranz , 27, has won the first Green ICT Hackathon event organized by Telefónica and the ITU in Barcelona, which also coincides with the Mobile World Congress being... 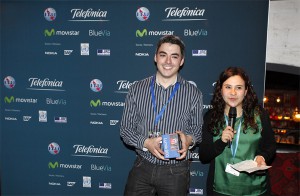 The Spaniard, Asier Arranz , 27, has won the first Green ICT Hackathon event organized by Telefónica and the ITU in Barcelona, which also coincides with the Mobile World Congress being held in that city. The contest awards the best ideas for green ICT applications that promote “Sustainable Energy for all”.

The application, for which Arranz won 3,000 dollars and a Nokia Lumia, helps users of the urban public bicycle renting service (bicing) to find the most suitable location for depositing bicycles and to strive towards their optimal distribution throughout the entire urban network.

Using a geographic location system, the application provides the user with several locations for returning his bicycle.  In order to act as an incentive for bringing the bike back to one of these locations, Arranz proposes the payment of micro-payments which, in turn, would be deducted from the annual service fee charged. Currently, a van repositions the bicycles so that all collection points have bicycles when customers require them.

“What the ‘Bicing Gamification’ application seeks to achieve – says the creator- is to reduce costs, lower CO2 emissions and convert this green transport system into a game to promote its use and make cities more sustainable”.

The second prize, 2,000 dollars and a Nokia Lumia, was awarded to the Brazilian, Dirceu Dirs , 22, who came up with an application that facilitates the loading of the cleanest fuel for vehicles. Thus, whenever a tank is emptying and you need to refuel, the driver receives an SMS message indicating the nearest and cheapest gasoline station.  The application, which is called “Easy Refuel”, has been developed on the Arduino electronic platform.

And the third prize, a Nokia Lumia, went to the 32-year old American, Aaron Franco, who has designed a robot with seeds which when located on land, produces plants that in turn generate sustainable energy and can feed people.  The application, called “Jatrobot”, is especially useful for promoting the creation of agricultural companies in developing countries.

Likewise, for Telefónica and the ITU, the contest represents a further step in setting up a world network of green developers, thus promoting the use of ICTs to improve energy efficiency and facilitating the transfer of technology, key targets in view of the upcoming Rio+20 conference.

Companies such as Nokia, SAP and the Joint Research Centre of the European Commission, WMO; and GreenHackathon and Iniciador have worked together as partners in dissemination activities. On behalf of Telefónica, the Hackathon has been headed by the Office of Climate Change and Energy Efficiency which have had the support of Movistar España and BlueVia.

Now that the Hackathon is over, Telefónica and the ITU invite developers to submit their draft projects for the Green ICT Application Challenge until 13th April 2012.