25 years building the backbone of a Digital Union

This month Telefónica celebrates 25 years of presence in Brussels. In 1989 we opened our office in the capital of Europe. Since then, many things have changed for Telefónica but also for the... 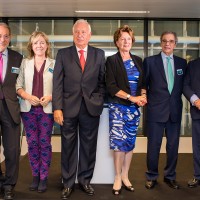 This month Telefónica celebrates 25 years of presence in Brussels. In 1989 we opened our office in the capital of Europe. Since then, many things have changed for Telefónica but also for the European Union: From housing more than 350 million European citizens to 507, from having 12 member States to 28 and from founding a Community to become a Union building together a Single market.

Telefónica has also walked forward with the signs of the time. In only two decades, we have become a multinational leader with more than 315 million customers and more than 20 countries. Only in Europe we proudly serve more than 100 million citizens. We have also doubled the number of employees working with us and multiple our revenues by 13 stimulating, competitiveness, economic growth and sustainability. In the European scenario we are the 2nd Telco by revenues and by number of customers, and the first Telco by investment in R&D. The evolution of the telco sector has also been spectacular based on the liberalization of the sector enabling competitive markets for communication and broadband across Europe. But above all, we have a global mind-set because we are all immersed in a Digital Revolution in which the traditional borders are blurring.

Today, citizens, public institutions and companies are immersed in this new technological wave of digitalization that is transforming our daily lives, the way we work and even the idea of time. In fact, never in the history of humanity has been an accumulation of technology such as the one we are living now. But in any case we have only seen the “tip of the iceberg”: Only 1 % of the things are connected worldwide. However, by 2020 is expected that more than twenty billion objects will be connected via Internet. The next exciting phase of evolution will probably come through the connected living or the Internet of Things!

Can you imagine what we will think about 2014 when we look back in 25 years from today? We are clearly looking at a very different world from the one we have seen in the past. So, what will we think in 2039 about today?

Yet, today we need to address new challenges. A key concern for us is that in recent years we have seen how Europe has been losing its leadership in technology. In order to recover digital leadership, we should take very specific measures to promote investment in new digital infrastructures, which will need to avoid the old regulatory recipes only good for the legacy networks, and promote investment risk and commercial flexibility. A smart spectrum policy is also needed in order to make spectrum available to operators at the appropriate times, under harmonized conditions. Besides this, policymakers and regulators should think that the digitalization of our societies and economies will radically influence the policy making process given the epochal change we are witnessing.

Telefonica changed the course of its business years ago and today is an essential part of a vibrant and fast-changing digital ecosystem. Being a Digital Telco means that we are part of a flourishing and key industry for our economic competitiveness worldwide. We compete fiercely with all players of the ecosystem, but also know how to cooperate with them to grant citizens a wider range of products and services.

Which are our views and recommendations? In the Digital Manifesto of Telefónica we give a big picture of what we consider the main issues to be tackled. The idea of openness is the core of our vision; because we believe that safeguarding an open Internet we are broadening the access of everyone to technology and the range of our customers’ experiences. At the same time we believe that we need more “Digital Confidence” in Europe. Trust is absolutely necessary to let the digital ecosystem flourish. Thus this means that there is a sound need to improve transparency and the ways in how users can control their privacy and security.

From the regulatory perspective, a level playing field in the Internet ecosystem is also required. Two competing services should be both bound by the same rules. Same service, same rules! Additionally, we are convince that in a highly competitive markets where relevant players, products and services change all the time, it is much better reacting fast when conflict arises than trying to anticipate any unlawful conduct of some of those market players. In short, a way to grasp the opportunities of technologies is regulating less ex-ante and rather set clear long-term policy objectives like competition and investment. In competitive markets it is much better intervening ex-post when there are problems arising.

25 years working in Brussels with a passion to enhance communication of European citizens has been a privilege. I hope that when we look back in 2039 to today, we will celebrate the smart design of policies and projects that have enabled us to build an open, competitive, innovative and globally-leading European economy.

In the next years we need to be focused on what really matters: Economic growth, job creation, top class internet infrastructure and innovation environment, which will allow Europe to get back to the top of the world leading economies and create a better place to live in.