Álvarez-Pallete: “Europe has a unique opportunity to undertake a successful digital transition”

Telefónica’s CEO participated in the 1st Atlantic Forum La Toja, under the heading, "A space for reflection and the defence of liberal democracy" 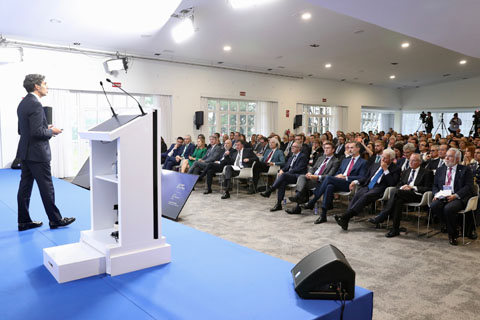 Telefónica’s CEO participated in the 1st Atlantic Forum La Toja, under the heading, “A space for reflection and the defence of liberal democracy”

La Toja, 3 October 2019 – The chairman of Telefónica, José Mª Álvarez-Pallete, spoke this afternoon at the 1st Atlantic Forum La Toja, under the heading, “A space for reflection and the defence of liberal democracy”, where he explained the concept of the digital transition.

A transition of the same importance as the environmental transition in terms of urgency and relevance, which Europe must undertake as soon as possible. “Just as efforts are being made to mitigate the effects of climate change with investments in renewable energy, it is time to manage the transition to the new digital economy resulting from the explosion of data, something that is generating inequality and collateral effects,” he said.

“Europe led the telco industry in the 80s and 90s, but now it is not present in the discussion and we are running the risk of being left out of the new geostrategic focus that artificial intelligence entails.” A new revolution that will have a $15.7 billion impact on the world economy by 2030.

However, Telefónica’s CEO was optimistic about the historic moment in which Europe must tackle this digital transition, “a unique opportunity to make it a success”, he explained. Europe has high-value industries, and it is a leader in sectors such as the automotive, aerospace, chemical and biotechnological industries, while also being a key and reliable player in commercial policy. All of this is based on common, historically shared values, which Europe has always defended and which it is time to bring to the forefront.

In this context, Pallete reviewed the position of Spain, which faces the digital revolution from a privileged situation. Telefónica’s CEO stressed that the country has become a “benchmark for growth in Europe, a leader in digital and transport infrastructures and one of the most attractive countries for foreign investment. We are also a diverse, open, supportive and tolerant country, with a strong growth in the active population, especially women, and with one of the best healthcare systems in the world. “We assume our responsibility, and we want to go beyond.”

Pallete spoke in La Toja of the unprecedented “accumulation of technology” that we are living, that is, changing one by one human habits, from communication to the way we travel, conversation, access to food, health, reading, writing, music, shopping, computing or the way of teaching and learning.

A paradigm shift that offers enormous opportunities, but also opens up new risks. More than half of the traffic that circulates through the networks is not human,” said the Telefonica’s CEO, “and out of this traffic, more than half of it is dangerous.

Telefónica’s CEO also referred to the revolution in jobs. “By 2025, half of the jobs we now know will be automated, yet there will be a proliferation of professions we do not yet know. Digital skills will be key to develop, programming, computing … skills that most employees still lack.” The figures, however, are optimistic. In the period 2018-2022, the difference between jobs that will disappear compared to new ones leaves a positive balance of 58 million new jobs, according to the World Economic Forum.

“Connectivity is the core, and we can’t leave anyone behind,” Pallete said. The new digital economy needs “policies that encourage investment and education, as well as a fair competition framework that suits the new realities.” It is necessary to create a framework of trust where users feel that they have control over their data, that it is used transparently and that it is kept secure. “We face the challenge of achieving fair and inclusive digitalisation for all. It is not the era of technology, but of humanity,” concluded Álvarez-Pallete.