As part of the Mobile World Congress in Barcelona, Transports Metropolitans (TMB) and Telefónica, in collaboration with Mobile World Capital Barcelona, have joined forces to improve the user experience of the shuttle bus that connects Plaza de Espanya in Barcelona with the Gran Vía de La Fira exhibition centre in L'Hospitalet, where the mobile world congress is being held. 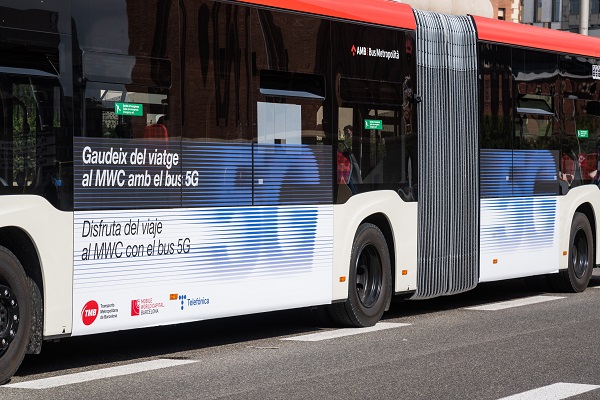 Barcelona, 29 June 2021. As part of the Mobile World Congress in Barcelona, Transports Metropolitans (TMB) and Telefónica, in collaboration with Mobile World Capital Barcelona, have joined forces to improve the user experience of the shuttle bus that connects Plaza de Espanya in Barcelona with the Gran Vía de La Fira exhibition centre in L’Hospitalet, where the mobile world congress is being held.

In this way, a simultaneous translation service has been implemented which, thanks to the low latency provided by 5G and edge computing, allows users to maintain a fluid conversation in different languages and in real time. This translation service is channelled through a mobile application that is capable of translating into 25 languages – speech-to-speech, speech-to-text, text-to-speech or text-to-text – and which responds through a voice message with a voice that is very similar to a human voice thanks to artificial intelligence. The software that processes the translation is installed in Telefónica’s edge computing, which allows for an almost immediate response so that a face-to-face conversation can take place in a very natural way. The simultaneous translation service is available at the stops located at the start and end of the route between Plaza de Espanya and Fira Gran Vía and helps TMB staff to answer questions from Mobile World Congress attendees using the shuttle service. For the development of this service, Telefónica has the collaboration of Intel for the edge computing hardware and Lingmo for the development of the mobile application.

At the same time, two 1,500 x 500 ultra-panoramic screens have been installed in one of the high-capacity buses that provide a shuttle service during the Mobile World Congress, allowing users, also thanks to 5G and edge computing, to view live and in high quality, during the journey, exclusive content related to the new products presented by Telefónica at the mobile world congress.

For Rosa Alarcón, TMB’s president, “5G technology appears as a key part of the digitalisation of public transport that we are promoting to optimise the public transport service in the Barcelona area, as well as to improve users’ travel experience”. He also announced that “these proofs of concept will be continued later this year in the Bus Lab project, a rolling laboratory where we will test emerging technologies before their implementation on pilot lines and their extension to the entire bus network”.

According to Mercedes Fernández Gutiérrez, Technology Innovation Manager at Telefónica Spain, “5G brings us capabilities to transform the traveller experience. Telefónica already has a commercial 5G network that facilitates high-speed downloads, allowing us to watch high-quality live content while travelling by bus, in this case through Barcelona, and edge computing allows us to reduce latency, which is vital for shortening the response time of the new simultaneous translation application, so we can maintain a fluid conversation in real time in different languages”.

Eduard Martín, CIO and Director of the 5G Programme at Mobile World Capital Barcelona, adds that “5G technology is already a reality in people’s daily lives, and both Barcelona and its metropolitan area are consolidating their position as one of the most important smart cities in Europe. Through the 5G Barcelona initiative, of which we are part, we seek to create synergies within the 5G ecosystem and offer an experimental infrastructure for testing, prototyping and implementing new digital solutions, and this pilot project is a good example of this type of collaboration”.