- FiLIP Wearable Phone and Locator, made popular in the U.S., enables parents and kids to keep in touch during the day and quickly connect in case of emergencies. 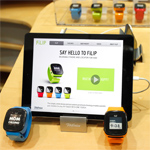 – FiLIP Wearable Phone and Locator, made popular in the U.S., enables parents and kids to keep in touch during the day and quickly connect in case of emergencies.

Mobile World Congress, Barcelona, 3 March 2015. Telefónica and Filip Technologies today announced that they are bringing FiLIP, the award-winning wearable phone that keeps parents and kids connected at the push of a button, to Europe and Latin America. FiLIP launched in the United States to critical acclaim in 2013. Under an agreement with Filip Technologies, Telefónica will introduce FiLIP in several countries where it has operations, starting in Europe in the coming months.

Designed for children ages 4 to 11, FiLIP combines GPS, Wi-Fi, and GSM technologies into a colourful watch that can be worn to school, the playground, and everywhere in between. FiLIP has only the features that parents want: location tracking, voice calling, and direct messaging to their child. The parent remains in control at all times through an app on their smartphone, including the designation of five trusted contacts with whom the child can communicate. FiLIP also allows parents to set SafeZones, triggering notifications if the child enters or leaves designated areas. While most parents hope their child is never in an emergency situation, in the event that they are, FiLIP features an emergency button that, when pressed by the child, activates an intelligent emergency procedure to locate the child and call each of the pre-determined emergency contacts until one is successfully connected.

“Our goal with FiLIP has been to create a simple product that gives kids the freedom to explore and parents peace of mind that they can locate or speak to their children when they are apart,” said Jonathan Peachey, CEO of Filip Technologies. “FiLIP is perfectly aligned with Telefónica’s focus on providing innovative products and services to families, and their huge international presence makes this an exciting partnership for our company as we embark on expansion outside the U.S.”

Stephen Shurrock, Telefónica S.A. Consumer CEO, commented “we are delighted to partner with Filip to bring their smartwatch for kids to Europe and Latin America. Here at MWC there is a lot of focus on high-end wearable devices for adults, but FiLIP stands out as a watch that is fun for kids giving parents peace of mind. It is designed as something kids want to wear and to give parents that added reassurance”

“As a leading digital telco we are committed to helping families discover fun new technology while remaining connected and safe at the same time. Filip Technologies is the perfect partner to make this happen and represents an important step forward in our digital peace of mind strategy”, Stephen concluded.

The partnership between Telefónica and Filip Technologies has been several months in the making and involved extensive consumer research. In a study conducted last year, several key findings indicate the need for a product like FiLIP in Europe:

The two companies are collaborating in a similar research in Latin America where most parents share the same concerns as parents in Europe.

“We’ve already seen FiLIP bring change to the way that families communicate,” said Sten Kirkbak, Founder of Filip Technologies. “Modern parents are used to being connected but have few options when it comes to those they care about the most – their young children. Soon, parents in Europe and Latin America will be able to use FiLIP to stay in direct contact with their kids, either by making a phone call straight to their watch or by simply seeing where they are on a map.”

Additional details on pricing and service plans will be available in the coming months.

Filip Technologies, Inc. develops communication and location-based products and services designed to keep families in touch. Its products combine the two most important elements in family mobile offerings – communications and safety. The company’s flagship product, FiLIP, is the world’s first wearable phone and locator for children. Its patent-pending technology combines cellular voice with geo-location capability in a device small enough to be worn on a wrist. Founded in 2009 by Sten Kirkbak after he briefly lost track of his young son Filip in a shopping mall, Filip Technologies, Inc. is privately held with offices in New York, N.Y. and Raleigh, N.C. For more information, please visit www.myfilip.com.

The survey referenced in this press release was conducted online with consumers in Germany, Spain and the United Kingdom by Ipsos MORI on behalf of Filip Technologies and Telefonica from 13th August – 2nd September 2014 among 855 adults ages 28-49 and parents/guardians of children ages 4-11. This online survey is not based on a probability sample and therefore no estimate of theoretical sampling error can be calculated. For complete survey methodology, including weighting variables, please contact media@myfilip.com.