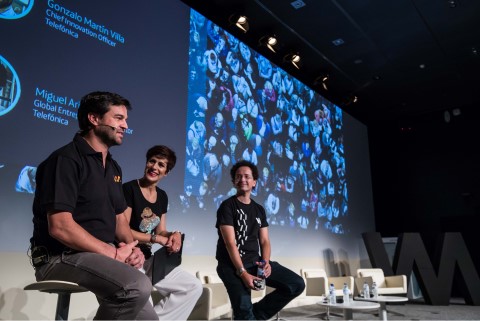 Madrid, 20 September 2018. – Wayra starts a new phase with a focus on accelerating technological and mature companies that fit in Telefónica’s strategic projects. The start-up accelerator, founded in 2011, is being reinvented in order to, more than ever, focus on business.

Telefónica’s Chief Innovation Officer -Gonzalo Martín-Villa, cofounder of Wayra since seven years ago, and current Manager and Global Entrepreneurship Director, Miguel Arias, presented this morning in Distrito Telefónica, the key information about to the new direction that the company wants to give to its Open Innovation projects.

In these seven years, recalled Martín-Villa, Telefónica has managed to become “the most global, connected and technological open innovation hub in the world”. Since 2011 Telefónica has invested, between Wayra and its funds, more than 160 million euros and has presence in 16 countries through its academies and their innovation hubs. More than 400 of the startups accelerated within the Open Innovation programme remain active, and, more than twenty have reached a value over 50 million dollars.

“Our brand, Wayra, is an institutional asset that promotes all areas of the business. That is our vision, and our objective is to focus on more mature startups that make us grow and keep the growth within Telefónica,” added Martín-Villa.

The new Wayra, whose logo was presented today in Madrid and, simultaneously, in seven other countries at different events with the local entrepreneurial ecosystem, will focus acceleration and investment in more mature companies with a clear business plan and whose activities are eminently technological and related to Telefónica’s strategic projects in fields such as Big Data, Artificial Intelligence, Internet of things, cybersecurity or fintech.

This new approach comes a few months after the arrival at Telefónica of Miguel Arias, Global Entrepreneurship Director and previously director of operations of the Spanish startup CARTO, owned by Telefónica Open Future.  “We know that the best entrepreneurs look for business and scale, rather than only investment. That’s why we now focus on finding partners aligned with Telefónica’s strategy and interests”, explained Arias in the presentation.

Arias reviewed the ambitions and objectives of the area of Open innovation until 2020:  “We aspire to support a cultural change in the company that reaches the whole organization and leads us to more agile and digital processes, with the objective of having, in 2020, more than 200 startups working on a scale with Telefónica, helping to grow significantly in income and become more efficient and more sustainable.”

Vicente Muñoz, Chief IoT Officer at Telefónica, was one of the managers who accompanied Martín Villa and Miguel Arias on the relaunch of Wayra to present “IoT activation”, a programme aimed in particular at startups that need to promote the development of Internet of things (IoT) solutions.

The IoT activation programme makes exclusive tools available to creators, developers and entrepreneurs services so that they can test free new IoT solutions to reduce the time to market.

Through this program, Telefónica will support both initial functional tests and greater scale pilots enabling access to a set of tools, IoT, which include connectivity through SIM cards and modules and devices to configure IoT solutions; access to Telefonica’s IoT connectivity platform, which provides complete control of IoT solutions and access to The Thinx, Telefónica’s laboratory of new technologies and connectivities such as NB-IoT and LTE-M.

“IoT is one of those levers that make it possible for us to evolve, to change, to improve our possibilities in the context of transformation that we are experiencing. That is why we want to attract a solid base of partners, as well as innovators of IOT in very different fields, and we are building an ecosystem of THINGNOVADORES. By promoting the meeting and collaboration of all of them, we are convinced that the advances that Telefónica IOT can bring to people, companies and industries will respond faithfully to what they really want to achieve,” explained Vicente Muñoz.

“We scale startups” is the claim that starts this new phase of Open Innovation at Telefónica, seven years after the launch of Wayra, the first major corporate accelerator. Wayra was set up with the aim of helping to democratise entrepreneurship providing financial support and development to innovative ideas that arose in any of the countries where Telefónica operates.

Three years later, in 2014, Telefónica Open Future was set up, a global open innovation project which opened up to third-parties -public and private institutions- collaboration to support entrepreneurial projects. Currently there are more than 50 Open Future hubs around the world, mostly created together with local partners.

“Wayra’s global infrastructure, our experience with developers and startups and the rooting we have achieved in these years in the innovative ecosystem of 16 countries, are unbeatable,” concluded Gonzalo Martín-Villa.