Telefónica, recognized as an European open innovation champion for its support to startups 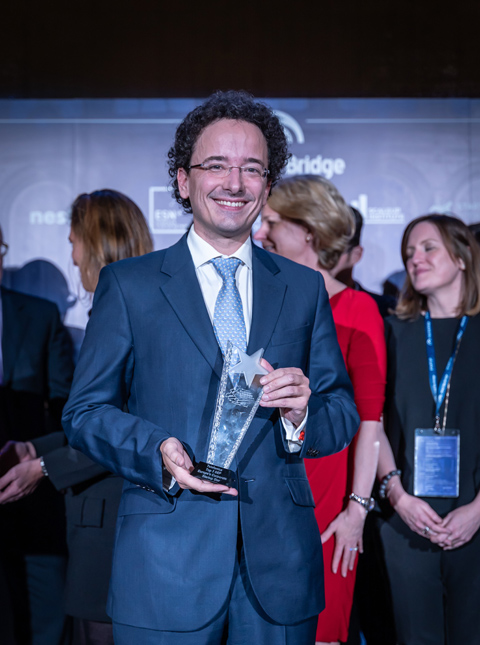 Madrid, December 11th, 2019. – For the fourth year running, startups across Europe have nominated the most active corporates in terms of open innovation as part of the Corporate Startup Stars Awards. Enel has secured the top position, followed by SAP and Telefónica, according to the new ranking unveiled during the SEP Scaleup Summit organized by Mind the Bridge at the Bolsa de Madrid. Europe’s Corporate Startup Stars annual ranking is produced by the innovation advisory firm Mind the Bridge and innovation foundation Nesta under the European Commission’s Startup Europe Partnership initiative. 36 European companies have been awarded in total: 12 as Europe’s Corporate Startup Stars and 24 as Europe’s Open Innovation Challengers.

Alberto Onetti, Chairman of Mind the Bridge and Coordinator of Startup Europe Partnership (SEP), said: “Telefónica has been one of the front runners in startup-corporate collaboration. Not surprisingly, they are very active in all the areas of open innovation (from acceleration and procurement to investments and acquisitions). Particularly noteworthy is the recent evolution with a growing focus on going beyond pilots and proof of concepts and producing value (revenue increase, cost savings) together with startups and scaleups. This is a path many other corporates will follow”.

Daimler, Orange, Telefónica have been recognised with the “Corporate Startup Accelerator Award”; Bosch, Cisco, and Samsung Electronics with the “Corporate Startup Investment Award”; ACCIONA (novel approach mixing Acceleration and Procurement), Enagás (intrapreneurship approach), and UnipolSai (diversifying into mobility through POCs with startup and acquisitions ) with the “Innovative Programme Award”; BP with the “Best New Entrant Award” (reserved to the best first-time applicant).

The organizers also gave a special mention to Transport for London (TfL) for Public Sector Innovation, to recognise the efforts of public entities moving into the open innovation space. This will be institutionalized as an official Award category starting next year.

Mariya Gabriel, European Commissioner for Innovation, Research, Culture, Education and Youth commented: “A sustainable ecosystem of innovation in Europe requires both startups able to grow dimensionally and internationally and established corporates capable to innovate. Then corporate-startup collaboration might benefit both sides. That’s why initiative such as SEP Europe’s Corporate Startup Stars are important to showcase best practices and role models.”

“Collaboration with startups and scaleups is an important mode of open innovation, and it is great to see more organisations recognising the value that it can bring. We hope that these awards encourage other organisations to think about new ways of innovating, to help drive productivity and growth across Europe.”