The Abanca-Riazor Stadium in A Coruña, home of the Real Club Deportivo, will become the stadium in Europe with the most complete deployment of 5G coverage and use cases. 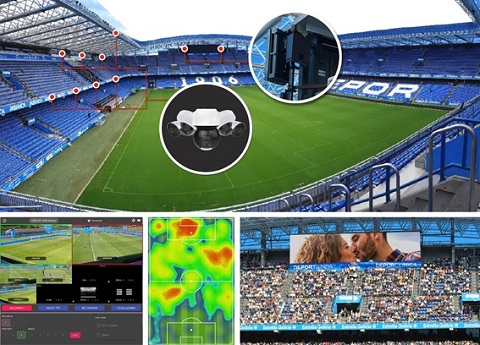 September the 10th 2020. – The Abanca-Riazor Stadium in A Coruña, home of the Real Club Deportivo, will become the stadium in Europe with the most complete deployment of 5G coverage and use cases.

The main functionality will enable the live broadcasting of sporting events with automatic production based on Edge Computing and Artificial Intelligence, also having additional services such as KissCam, heat maps through augmented reality and multi-camera TV.

Telefónica has also deployed an Edge Computing center in A Coruña, to host Cinfo’s tiivii solution for production and automatic TV broadcasting, which thanks to its artificial intelligence algorithms is capable of performing game analysis in real time, tags plays, and orienting and switching the cameras to generate a signal made suitable for a live TV. This is all done on a low latency cloud provided by Edge Computing and the 5G network. Cinfo is also responsible for additional use cases aimed at increasing spectator participation in the stadium, such as KissCam services and augmented reality heat maps.

Ericsson technology has been used for the network deployment, including one of the world’s first millimeter radio units in the European 26 GHz band, as well as 3.5 GHz radio and 5G network cores in both NSA (Non Stand Alone) technologies. as SA (Stand Alone), the 5G network with the most advanced features.

Additionally, Vodafone has collaborated to be able to use occasionally the spectrum of both operators jointly in the 3.5 GHz band, in a series of tests aimed at finding out the maximum possible potential in this central frequency band, as a previous step to the use of millimeter bands.

This combination of 5G coverage from Telefónica with Ericsson, together with the tiivii solution from Cinfo, shows us, among many other things, the possibilities of broadcasting an event without having to move a mobile TV unit to the place where it is located. produces, which will result in the democratization of live shows and the professional realization of all kinds of events with much lower costs, enabling quality live broadcasting for regional and local events, something that until now was not profitable

tiivii is a solution developed by Cinfo, a Spanish company with its headquarters in Galicia (Spain), a leader in smart automatic production systems on the cloud. Throughout its more than 15 years of experience they have created highly performing system architectures for OTT platforms (for TV retransmission through the internet), SmartTV, digital television, mobile apps, artificial vision systems and video production on the cloud.

Cinfo has recently received financing from the European Union of 6 million Euros for the complete development of tiivii’s system; a combination of a grant and a direct capital investment from the new EIC Fund, to which private investors can join.

tiivii has been financed by the investigation and innovation EU program Horizonte 2020 under the grant agreement number 954040.