Telefónica presents the global strategy for its original series

Telefónica presents the global strategy for its original series 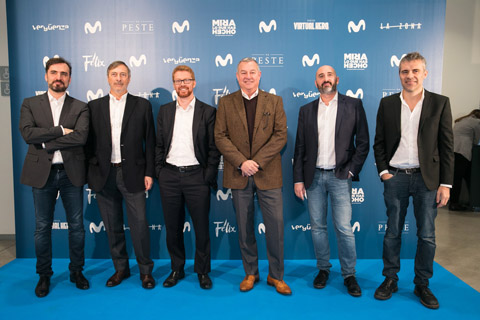 Madrid, 8 February, 2018.- Telefónica has announced this Thursday at the Telefónica Foundation Space the distribution of the Movistar+ original production series in Latin America. The event was attended by Sergio Oslé (President of Movistar+), Michael Duncan (CEO of the Telefónica Global Consumer Unit), Domingo Corral (Director of Fiction at Movistar+), José Antonio Félez (Executive Producer of ‘La Peste’ (‘The Plague’)), and Alberto and Jorge Sánchez-Cabezudo (creators of ‘La Zona’ (‘The Zone’).

“As a group, Telefónica is stressing its capabilities as creator of original fiction contents and its broad multi-platform scope. The operation that is being announced today will make it possible for the Movistar series to arrive to more than 13 countries in 2018, making it possible to reach 3.8 million Pay TV customers in Spain and more than 3 million Pay TV homes in HisPam. The more than 110 million Movistar mobile clients in the region must be added to this scope, all of which would also have access to these contents”, says Sergio Oslé regarding the operations agreement.

Movistar+ is wagering on original productions as the platform’s differentiating element.  “We want to create benchmark television where the client has the freedom to choose. We’re going to continue working on the television model that the user wants; we have the highways and the contents, and the challenge is to continue to adapt to the market, and for our clients to have the best contents together with a customized, multi-platform, and an on demand experience”, adds the Movistar+ President.

LAUNCH OF THE ‘MOVISTAR SERIES’ CHANNEL IN LATIN AMERICA

Movistar Series will offer original series and a selection of quality Latin American productions through its Movistar TV and Movistar Play platforms. In this way, the Movistar+ original series will arrive to 12 more countries. The new channel will be available in Chile, Colombia, and Peru on February 15, and will be added to the Movistar offer in Argentina, Costa Rica, Ecuador, El Salvador, Guatemala, Mexico, Nicaragua, Panama, and Uruguay in the next few months. 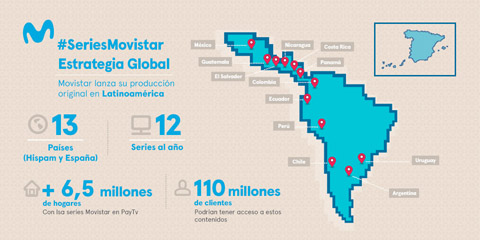 The new Movistar Series channel will premiere 12 original series throughout 2018.  But in addition to the Movistar+ original series, the channel will also broadcast Spanish speaking contents produced by third parties, successful Latin American series in different duration formats, as well as movies and documentaries. Each week Movistar Series will premiere episodes of 9 series and 5 movies.

“We will become a platform of platforms in Latin America, offering the best contents in the market, but that will also have differential attributes that make our value proposal unique and distinguished by its quality. We believe that there is enormous potential for a platform of quality contents made in Spanish, and we want Movistar Series to become the benchmark channel for these contents”, adds Michael Duncan.

Domingo Corral explains: “The Movistar original series are not only in our own language, but also represent us and sound like us. They are local stories with a universal attraction. For example, ‘La Peste’ has surpassed the number of viewings of ‘Game of Thrones’, ‘The Walking Dead’, or ‘The Big Bang Theory’. This fact demonstrates the relevance of local contents for our clients.”

For the Movistar+ Director of Fiction, another key is to create productions hand in hand with the best creators: “We have the best talent for producing quality series with the same level of the best movies.  We’ve already begun to see the results with our first premières.”

In this way, Movistar Series is turning into a window for Spanish talents by wagering on production in both Spain and Latin America.

‘La Peste’, created by Alberto Rodríguez and Rafael Cobos, will be the first Movistar+ original series that Movistar Series will premiere. Another eleven original productions will follow it, including: ‘Felix’ by Cesc Gay, staring Argentinian actor Leonardo Sbaraglia; ‘Matar al Padre’ (‘Killing the Father’) by film-maker Mar Coll; ‘Gigantes’ (‘Giants’) directed by Enrique Urbizu; ‘Arde Madrid’ (‘Madrid is Burning’) created by Paco León and Anna R. Costa, or the anime ‘Virtual Hero’ which is based on the comic book by Rubius, among others.

THE IMPORTANCE OF ORIGINAL PRODUCTIONS FOR THE INDUSTRY

In a complicated time for the industry, the Movistar+ original productions are contributing towards the revitalization of jobs. “‘La Peste’ generated an impact of more than 400 direct jobs in the industry for sector professionals, and had more than 2,000 extras on a production with a €10 million budget”, according to José Antonio Félez, Executive Producer of ‘La Peste’. The Movistar+ original production generated a total of 1,500 direct jobs.

Movistar invested 70 million Euro in the original production, 10 of which were earmarked for ‘La Peste’. “We believe that if our creators receive the necessary resources they will give their best and contribute towards a great television production”, explains Domingo Corral. This investment has resulted in quality productions, thus contributing towards “improving the image of our audiovisual, something that’s perceived beyond our borders”, say the Sánchez-Cabezudo brothers, creators of ‘La Zona’.

Developing local stories with a universal vocation for the creators is a challenge: “Proposing a series for a global market is complicated, but if you consider that the more local stories are those that have a greater impact on the universal public, I think that that’s what we have achieved with ‘La Zona’”, explain Alberto and Jorge Sánchez-Cabezudo.