Telefónica presents the first prototype of an open and convergent access network that integrates fixed and mobile, and enables Edge Computing

• This model combines the advantages of the components from different providers in a simple, scalable, and flexible access network architecture 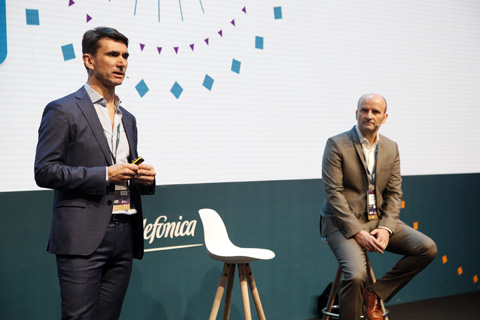 Mobile World Congress, Barcelona, 26 February 2019.- Telefónica presented the first prototype of an Open Access network at Mobile World Congress 2019, in a scenario of triple convergence of fixed, mobile, and edge computing in order to enable the incorporation of new technological network providers and the provision of new services.  Telefónica is advancing in the disaggregation and virtualisation of the access network equipment, both mobile (open radio node) as well as fixed (open OLT), and of the customer premises equipment designed as a white box with service logic integrated in the cloud.

This prototype represents how Telefónica understands the future ecosystem of telecommunications in order to sustainably deploy future 5G networks, fibre networks with XGS-PON technology, and equipment in the customer’s home. This strategy also includes the vision of multi-access edge computing within the framework of its global network virtualisation program, UNICA.

The prototype is based on the disaggregation of the hardware and software of network equipment, the use of general purpose servers, and the opening of interfaces. All of this provides total flexibility when selecting the components of the network, facilitating alternatives for the supply and innovation, which in turn enables more efficient future deployments of 5G.  The opening of the radio access node makes it possible to perform both traditional deployments (distributed) as well as cloud deployments (centralised) with the same equipment, and to incorporate technological improvements by just updating the software of the radio node.

Regarding fixed access network, Open Access makes it possible to offer new functionalities to the customer. As an example, the customer will be able to self-provision its fibre access and self-manage network capacity according to the bandwidth that it requires at any given time.  All of this also represents a major step in the context of fixed-mobile convergence because it makes it possible to jointly control and manage both access networks, and enables the incorporation of edge computing technology into the infrastructure in an integrated way.

Open Access also reaches the customer’s home with a new router, the first that integrates wifi 6 which improves coverage and reaches speeds of 10 Gbps.

Juan Carlos García, Director of Network Technology and Architecture at Telefónica said: “Our Open Access Project represents a revolutionary step towards new software-based open solutions that will open new deployment alternatives and new business opportunities. It will for sure help in facing the challenge of implementing denser networks and supporting efficient solutions for specific network slices and services. Operators and manufacturers are collaborating to make this possible.”

An open architecture that facilitates new services in the Edge

This new open and distributed access network architecture not only makes it possible to improve the performance of current services, but also to introduce new services and applications that will benefit from Edge Computing. Instead of hosting the traditional storage and computing capabilities in a central cloud, or in traditional servers at the customer premises, Edge Computing provides the best of both worlds and makes it possible to use these capabilities at the edge of the network; in other words, in the network segments closest to the devices that generate the data, such as a central office.

Key to the development of the Internet of Things, Edge Computing provides the real-time bandwidth and low latency between 3-5 milliseconds that many services and applications will need, such as 8K video, virtual and augmented reality, streaming video games, tactile Internet, robotics, or autonomous vehicles.

Telefónica is particularly well positioned to take advantage of the potential that this new technology provides, supporting itself on the capillarity its extensive fiber and radio networks and the proximity of its central offices to the end user. This large capillarity will thus contribute to solve one of the major challenges of the Internet, that of getting the services to the edge of the network, something even more necessary with the exponential increase in the consumption of contents.

“We have developed an open infrastructure network that allows us to experiment with Edge Computing and validate the technology”, said David del Val, Director of Core Innovation at Telefónica. “We have implemented pilots with customers and technological partners, and have identified a number of internal and external services and use cases that will help us to assess the interest of customers, as well as the business opportunity of each of them”.

The deployment of Edge Computing, together with open access and the virtualisation of its networks, will allow Telefónica to offer its customers new experiences by providing the possibility of programming connectivity and managing certain devices, services, sites, or specific connectivity needs of different sectors in a differential manner. At the same time, it will involve important internal efficiencies in both the provision of certain current communications services, as well as in terms of cost savings in the network and in the management of traffic in the network.

Telefónica’s firm commitment to Edge Computing at the MWC

Telefónica has already implemented Edge Computing pilots with customers and technological partners in Spain, and very soon in Brazil. At the MWC it is showing some of these solutions and use cases, such as the one which allows the possibility of programming and managing connectivity according to the needs of each user, or the one which shows the storage potential at the edge which makes it possible to upload documents ten times faster than what the cloud currently allows. It is also showing the capabilities that technology provides cars connected to 5G, and sectorial solutions such as one that combines the Edge and 5G, and which makes possible television broadcasting remotely without having to move a mobile production unit to an event.

Another demonstration highlights the position on privacy that Telefónica has taken together with the great potential offered by Edge Computing for the development of artificial intelligence. It is a facial recognition solution compatible with the new General Data Protection Regulation (GDPR) which has to instantly decide if the face it has recognised may or may not be disclosed according to whether or not the user has given its consent to do so.

All of these demonstrations can be seen in the Telefónica booth in Hall 3 Stand 3K31 at MWC in Barcelona, between 25-28 February.

A whitepaper about “Telefónica Open Access and Edge Computing“

can be downloaded here.

Blog
#NFC
What is NFC and what is it used for
Blog
#5G
When will 6G arrive and what progress will it bring?
Blog
#Public Policy
The spectrum and the goose that lays the golden eggs