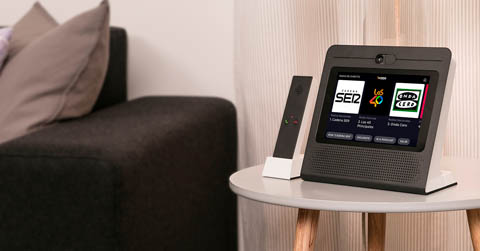 Madrid, 24 September 2019. Telefónica has launched a new release of Movistar Home, the Movistar smart home device that now allows users to access Twitter Moments, a selection of Tweets that show the best of what is happening on Twitter, and iVoox, the internet platform for listening live radio.

Twitter Moments in Movistar Home shows instantly the most relevant stories in the platform through collections of Tweets. These collections with the best Tweets, created by the Twitter content selection team, show a diversity of opinions and a wide variety of multimedia content on different topics: current affairs, sports, culture and entertainment, among others. Thus, Movistar Home becomes the first home assistant with a screen in the market that incorporates access to this Twitter service.

“This is the first time we have integrated Twitter Moments with a smart home device. In this way, and through voice commands, Movistar Home users will be able to access, read and listen to the best content about what is happening in the world. I’m looking forward to asking Movistar Home “Ok Aura, What’s going on?” and access the best selection of Tweets to understand what’s going on in the world through Twitter Moments,” explains Agustin Pesciallo, Business Development director for EMEA at Twitter.

The integration of live radio through iVoox in the new release also allows users to listen to the most popular stations in Spain through Movistar Home. This is the first step in a collaboration that will soon be expanded, also including access to iVoox’s extensive podcasts catalogue.

Emilio Moreno, iVoox CEO said: “There is an increasing demand for audio content and thanks to the incorporation of radio stations and, in the future, podcasts, Movistar Home users can enjoy a catalogue of millions of audios on multiple topics and languages directly on their device with a simple and elegant user experience.”

The new version of Movistar Home also includes new features such as weather information and new ways to control and enjoy the television.

Launched in October 2018, Movistar Home incorporates Aura, Telefónica’s digital assistant with artificial intelligence, in all its functionalities, allowing users to easily manage all Movistar devices for the home such as the television, the fixed line or the router simply with their voice,

Equipped with an 8” LED screen and a camera, Movistar Home is also a window for users to enjoy other experiences developed by Telefónica partners exclusively for Movistar customers. Through the Living Apps, applications specifically developed to run throughout the home devices ecosystem under the Home as a Computer (HaaC) concept, partners such as Air Europa, Iberia, El Corte Inglés and Atlético Madrid bring their services to Movistar customers and easily manage them with Aura.

“With Movistar Home, Telefónica strengthens its technological leadership in the home in Spain, where our customers already have different devices from the company”, said Chema Alonso, Chief Data Officer of Telefónica. “Not only does it allow them to manage all their devices and services with the company in a simple way through Aura, but it is also a window for our partners to develop experiences and bring them to our customers’ living room. In this sense, we are very pleased to continue strengthening our collaboration with Twitter by introducing Moments and broadening the range of content relevant to our customers, such as iVoox’s”.

The new release has been automatically distributed to customers who already have Movistar Home and it will be incorporated into the new units sold.

Blog
#Telefónica
What happened in the world the year Telefónica was founded?
Press room
#Telefónica
Telefónica launches MAIA, a platform to promote the reuse of its network equipment
Press room
#ESG
Álvarez-Pallete: “Without digitalisation there is no green transition”