Telefónica increases revenues by 11.2% in the third quarter and reaches a net income of €1,486 millions up to September

Madrid, 4 November 2022. Telefónica today presented solid results marked by accelerating revenue growth, which increased in the third quarter to €10,343 million, 11.2% more yoy. In a context of global macroeconomic uncertainty, the company has continued to grow, strengthening its position in its main markets and exploiting new opportunities, a performance that has enabled the Group to achieve a net income of €1,486 million in the first nine months of 2022.

The results obtained and the proactive management of the businesses, despite the unstable global scenario, make it possible for Telefónica to confirm the financial targets for 2022, revised upwards in the previous quarter. Telefónica also confirms the shareholder remuneration for the current year, consisting of a dividend of €0.30 per share entirely in cash, distributed in two tranches of €0.15 euros, to be paid in December 2022 and June 2023. This second payment will be submitted to the General Shareholders’ Meeting for approval. “Telefónica once again demonstrated the robustness of its business, confirming its financial targets for the full year. In this period, the company has doubled its cash generation compared to the previous year, despite the complex environment of global uncertainty and the deep energy and inflation crisis. Telefónica continues to execute its strategic plan and the strength of the balance sheet allows the company to face the demands of this new digital era while maintaining its firm commitment to create a better, more connected and more equal world,” said José María Álvarez-Pallete, Chairman and CEO of Telefónica. 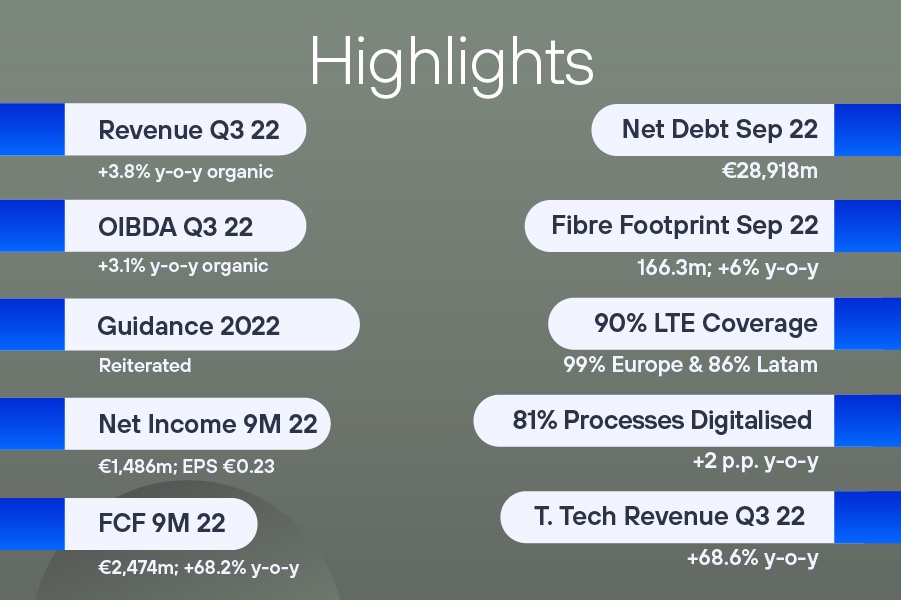 The strong growth in revenues in the third quarter was driven by double digit increases in Brazil (+29%) and Hispam (+18.2%), as well as in Spain (+0.2%) and Germany (+6%), a pattern that is also reflected in the first nine months.

Operating income before depreciation and amortisation (OIBDA) amounted to €3,249 million in the quarter, down 13%, as a result of the capital gains registered in the same period of 2021, which exceeded €700 million and came from operations such as the closing of FiBrasil deal and the sales of Telefónica Deutschland’s towers to American Tower, Telefónica Costa Rica to Liberty Latin America and 40% of InfraCo in Chile to KKR. Stripping out this effect, underlying OIBDA grew 8.5% to €3,293 million. 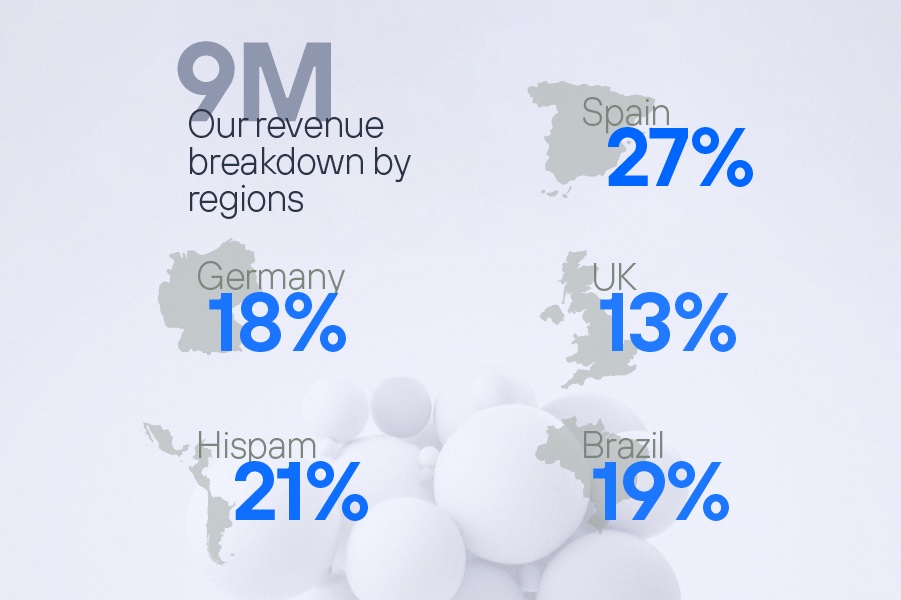 In its core markets, Spain strengthened its third quarter results with miMovistar, the personalised and flexible offer launched in the second quarter of the year, while Brazil, focused on the integration of Oi’s mobile assets, reported operating results that demonstrate its leadership in the market. Germany again showed solid commercial traction between July and September, and Virgin Media O2 (VMO2) continued to capture synergies and strengthen its content proposition to keep providing the best service to customers.

Free cash flow generation in the first nine months amounted to €2,474 million, 68% higher year-on-year. In the third quarter it reached €1,125 million, doubling the FCF achieved in the same period of 2021.

In terms of investment, Telefónica has allocated more than €4,000 million to the company’s growth, with the focus on the development and deployment of ultrafast networks. Including VMO2, investment exceeded €4.7 billion in the first nine months of the year, an increase of 5.6% in organic terms, bringing the ratio to revenues to 13.8%, in line with the target set for the year.

Telefónica Tech grows by more than 70%.

These figures reflect Telefónica Tech’s intense growth in 2022 to consolidate its position as a leader in the provision of advanced technological solutions to its customers, while significantly increasing in scale due to the contribution of the acquisitions made and the evolution of its organic results. In addition, the strategy of raising new growth opportunities remains on track. Telefónica Infra continues to capture growth through its fibre vehicles, with 12 million premises passed by fibre at the end of September and an aggregate target to exceed 25 million premises by 2026, while analysing opportunities to crystallise the value of infrastructure. Also, Telefónica Hispam continues to modulate its exposure in the region, with a focus on generating value via organic growth and through potential corporate operations.

Telefónica’s financing activity during the first nine months of the year amounted to €9,923 million, of which a total of €7,584 million corresponded to the refinancing of corporate debt.

This financing effort has enabled the company to maintain its solid liquidity position of more than €22,000 million. At the end of September, the average maturity of debt stood at 13 years and the Group has covered the maturities of the next three years, in addition to 74% of its debt being anchored at fixed rates. These references underscore the solidity of the company’s balance sheet, a fundamental attribute to face the current scenario of global instability and inflationary pressures.

During the third quarter, Telefónica continued to work on networks that are increasingly ready to provide the best service to customers and to manage growing traffic thanks to the company’s technological leadership in fixed and mobile infrastructures. In the case of fibre, Telefónica continues to maintain its global leadership (with the exception of China) with more than 166 million real estate units passed with ultrafast networks (+6%), of which a total of 87.2 million passed through the company’s own networks. Of the total number of ultrafast networks, 62.2 million are fibre-to-the-home (FTTH), and the vast majority (59.4 million) passed over Telefónica’s network.

5G technology already covers more than 800 towns and cities in the UK, 75% of the population in Germany, 83% in Spain and 35 cities in Brazil.

At the end of the third quarter, Telefónica’s access base stood at 383.5 million, 5% more than a year earlier, with growth of 17% in high value accesses such as fibre and 8% in mobile contracts.

On the environmental front, Telefónica made progress in the quarter in its renewable energy plan aimed at reducing emissions. Telefónica Chile joined Spain, Brazil, Germany, the UK and Peru in using 100% renewable energy. In addition, Hispam is expected to close the year with 50% of its energy consumption coming from renewable sources.

In social terms, Telefónica’s achievements in the quarter were recognised by various international organisations. Vivo was included in the Refinitiv Diversity & Inclusion Index and Telefónica Hispam, with its Women in Network initiative, has won best practice recognition from the UN Global Compact Network. In addition, Telefónica’s Board of Directors approved the Group Equality Policy last October On governance, Telefónica announced its role as a founding member of the Joint Alliance for CSR-JAC, and 85% of Telefónica employees have received ESG and business ethics training. In addition, the company has made progress in its sustainable financing strategy as VMO2 UK refinanced syndicate loans according to sustainability indicators.