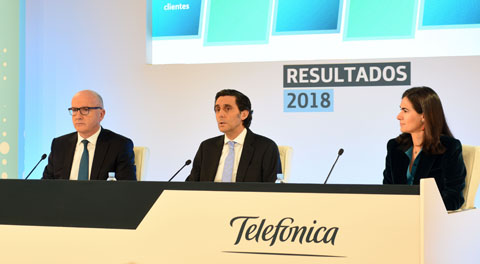 Our solid set of fourth-quarter results reflected the improvement in business’ sustainability. Value customers and their average lifetime continued increasing, while both revenue and operating cash flow growth accelerated.

In 2018, we regained customer relevance, resulting in the best-ever figure of customer satisfaction. We continued increasing the weight of high-growing revenues (broadband connectivity and services beyond connectivity) and investing in state-of-the-art technology networks. At the same time, we continued improving the Company’s financial flexibility with a solid free cash flow, growing ex-spectrum, which enabled us to reduce net debt for the third consecutive year. And all this, notwithstanding the negative impact from regulation.

This performance, together with the remarkable operating momentum in the initial months of 2019, allow us to announce with confidence our 2019 targets of continue growing in revenues and OIBDA, as we keep the CapEx/Sales ratio stable. In addition, we announce a stable, sustainable and attractive dividend in 2019 of 0.40 euros per share in cash, on the back of a solid and consistent cash flow generation”.

Telefónica presented today its financial results for the year 2018, which highlights its profitable and sustainable growth, the efficient use of resources, the radical transformation of networks and improved customer quality and experience. Also noteworthy is the strong net debt reduction of €2,445m in the year. Including post-closing events in the first two months of 2019 (divestments of Telefónica Centroamérica and Antares) debt would be further reduced by €1.4bn. 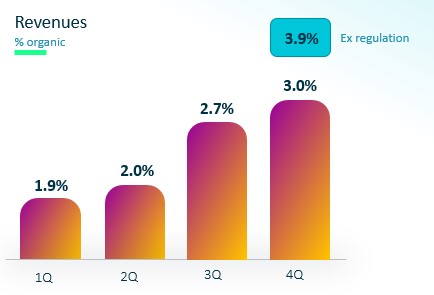 Operating income before depreciation and amortisation (OIBDA) stood at €15,571m in January-December (-3.8% y-o-y) and reached €3,537m in October-December (-9.6% y-o-y) affected by restructuring charges and goodwill impairments, as well as exchange rate effect.

In organic terms, OIBDA increased by 3.5% in 2018 (2.4% y-o-y in the quarter), despite higher operating expenses, reflecting the positive revenue growth, savings from digitalization and simplification, among other cost containment efforts. Excluding the impact from regulation (-0.9 p.p. in the fourth quarter and -1.7 p.p. in January-December), OIBDA would have risen by 3.3% y-o-y in organic terms in October-December and by 5.1% in 2018. 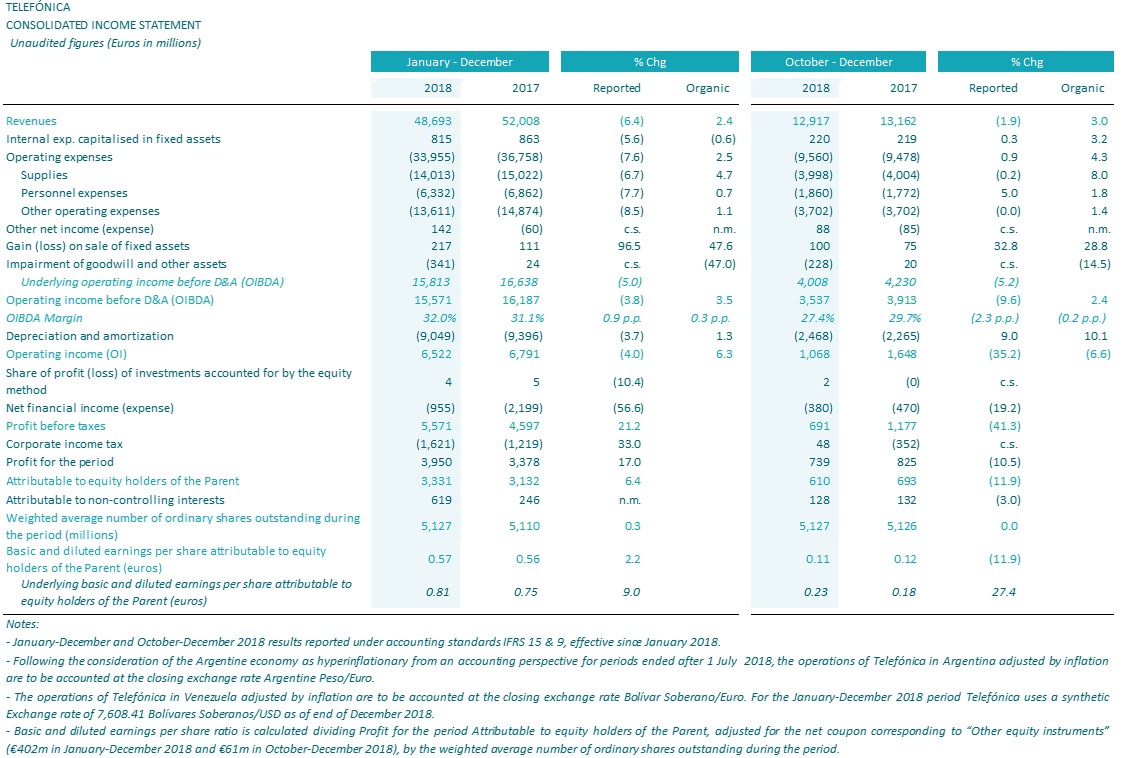 Also, the depreciation against the euro of foreign currencies which Telefónica is exposed to, in particular the Brazilian real and the Argentine peso, had a negative impact on the Company’s reported results. In the fourth quarter, the exchange rate evolution (excluding the hyperinflation adjustment) reduced y-o-y growth of revenues by -8.2 p.p. and -9.3 p.p. respectively in January-December. However, the negative impact of the depreciation of currencies seen at the OIBDA level (-€1,511m in 2018) was significantly reduced in terms of cash flow generation (-€508m), since the depreciation also lowered payments of CapEx, taxes, and dividends to minority shareholders. The evolution of exchange rates also allowed the Company to reduce net financial debt by €213m over the last 12 months.

Organic growth: Assumes average constant foreign exchange rates of 2017, except for Venezuela (2017 and 2018 results converted at the closing synthetic exchange rate for each period) and excludes in 2018 the hyperinflation adjustment in Argentina. Considers a constant perimeter of consolidation. Excludes the effects of the accounting change to IFRS 15 in 2018, write-downs, capital gains/losses from the sale of companies, tower sales, restructuring costs and material non-recurring impacts. CapEx excludes spectrum investments.

On the other hand, the Company confirms shareholder remuneration for 2018 and proposes the remuneration policy for 2019[2]:

Net financial debt at December (€41,785m) decreased by €2,445m compared to December 2017 thanks to free cash flow generation (€4,904m), net financial divestments (€392m) and other factors for a net amount of €532m. On the other hand; i) shareholder remuneration (€2,608m, including coupon payments and the replacement of capital instruments) and ii) labour-related commitments (€775m), increased debt. 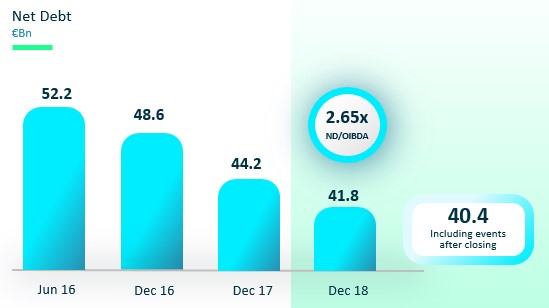 Including post-closing events (divestments of the operations in Telefonica Centroamérica and Antares), net financial debt would be further reduced by almost €1.4 bn. Debt fell by the seventh consecutive quarter and fell by €851m in the fourth quarter of the year.

In January-December 2018, the financing activity of Telefónica amounted to approximately €12,494m equivalent (without considering the refinancing of commercial paper and short-term bank loans) and focused on maintaining a solid liquidity position, and refinancing and extending debt maturities (in an environment of low interest rates). Therefore, as of the end of December, the Group has covered debt maturities for the next two years. The average debt life stood at 9.0 years (vs. 8.1 years in December 2017).

After the closing, in January Telefónica concluded its first green bond issuance, the first in the telco sector, through which it obtained an amount of €1,000 million maturing in February 2024 and with an annual coupon of 1.069%.

On the other hand, the estimated increase in the leverage ratio, as a result of the changes introduced by IFRS 16, in effect since January 1, 2019, is of approximately 0.2x.

Radical network transformation and efficient use of resources

The End to End digitalization program, the deployment of technology and the continuous review of our processes, has allowed us to reach more than €300m savings in 2018.

The business revenues at a Group level increased by 3.4% y-o-y in 2018, up to €9,622m, and represents nearly 20% of Group’s revenues, mainly thanks to the growing contribution of digital services revenues. 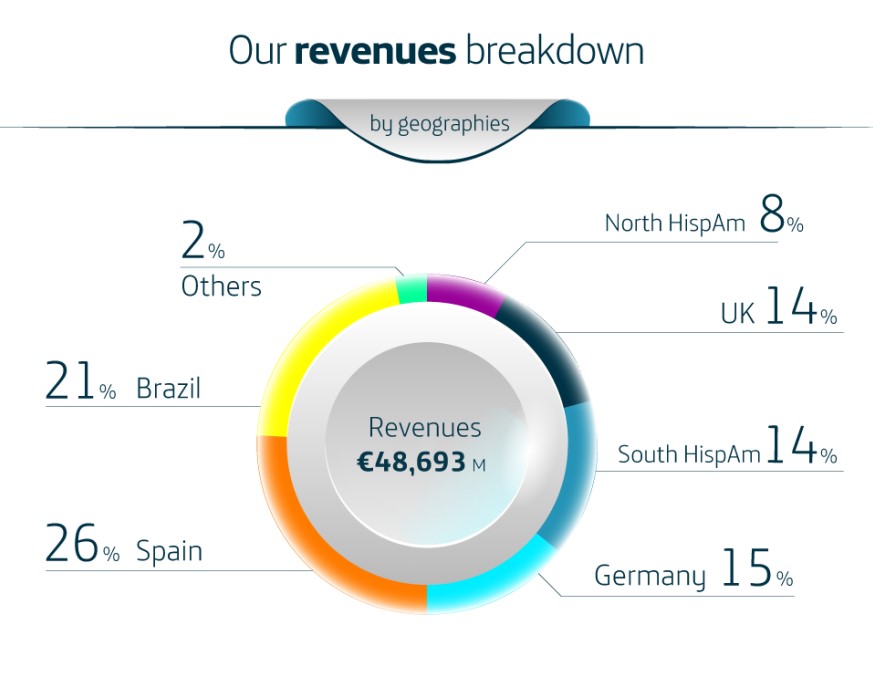 Telefónica España: sustainable growth and leader in profitability. Telefónica España results in the fourth quarter of 2018 confirm the strength and the gradual improvement of its growth rate, posting an acceleration in service revenues growth (+0.6% y-o-y, +0.6 p.p. vs previous quarter), though still affected by regulation and the loss of the Yoigo/Pepephone wholesale contract (+2.0% y-o-y excluding these impacts).

As a result, in 2018 revenues grew +0.4% y-o-y, with a faster advance in the consumer segment and a return to growth in corporate revenues while organic OIBDA margin remained at 40%, despite the already expected increase in content costs. Operating cash flow generation also increased (+0.6% y-o-y) on the back of the positive revenue performance and the lower level of investments (-5.1% y-o-y) derived from the broad 4G and fibre coverage.

Telefónica Deutschland: best in class network for the largest mobile customer base. Telefónica Deutschland continued to show a positive operational momentum, in a dynamic yet rational market environment. Telefonica Deutschland remained focused on profitable growth by stimulating data usage and monetising data demand (O2 Free tariff portfolio with double-data “Boost” option and the unique “O2 Connect”). During the quarter the Company largely finalised its network integration, with significant quality improvements. In Connect magazine, O2 achieved the best rating across user profiles in the category “tariff” and in “service”. While all providers scored at an overall high level, O2‘s achievement delivers the first milestone of its “Mobile Customer and Digital Champion” strategy. On the 5th of February, the new “O2 my All in One XL” convergent tariff was launched in order to provide better service to convergence-oriented customers.

Telefónica UK: good results and commercial traction. Telefónica UK delivered another strong set of results and continued to grow key metrics. The initial take-up of O2’s “Custom Plans” which provide customers with better flexibility and control (launched at the end of August) has been one of the key drivers of the Company’s commercial traction. O2 continued leading sector customer loyalty, reporting the lowest postpay churn in the market at an unchanged 1.0%.

CapEx in 2018 amounted to €1,464m, up 7.1% y-o-y organically, on the back of continuing investments in network capacity and customer experience; it is also worth mentioning the €588m investment in awarded spectrum in April 2018. Operating cash flow (OIBDA-CapEx) strongly improved in 2018 by 16.5% y-o-y.

Telefónica Brasil: record profitability and robust cash generation. In the fourth quarter, Telefónica Brasil returned to revenue growth (+0.5% y-o-y) thanks to the improvement seen in prepay and broadband. In addition, operating expenses decreased for the twelve consecutive quarter (-1.9% y-o-y, mainly on efficiencies achieved in the digitalisation process), allowing to reach the highest ever organic OIBDA margin (39.1%).

CapEx totalled €1,116m in 2018 (+8.0% y-o-y), representing 16% of operating revenues (excluding spectrum), stable y-o-y, despite the deployment of fibre, the increase in quality and 4G coverage and the launch of Pay TV service in Argentina.

Telefónica Hispam Norte: growing in high value customers. In Hispam Norte, quarterly results were still significantly impacted by regulation and competitive intensity, mainly in Mexico, although it is worth highlighting the positive results in Colombia. The good commercial trend in the region is also notable, with y-o-y growth in accesses in main products (contract, LTE, prepay, FBB, fibre and pay TV).

CapEx amounted to €668m in January-December (-26.8% y-o-y) and was mainly allocated to fixed and mobile network expansion. Additionally, in the quarter, €135m was registered for the acquisition of 40MHz of spectrum in the 2.5 GHz band and for the partial spectrum renewal in the 1,900MHz band in Mexico. CapEx (excluding spectrum) accounted for 13% of revenues (-4 p.p. y-o-y). Operating cash flow (OIBDA-CapEx) rose 17.9% in comparison to 2017.

[2] The adoption of the corresponding corporate resolutions willbe poroposed in due course, announcing the specific payment dates.