- The team will feature four new faces: Marc Soler, Rubén Fernández, Winner Anacona and Rory Sutherland, and maintains its main block, with Nairo Quintana and Alejandro Valverde as leaders. - The Movistar Team aspires to achieve further titles -116 since Telefónica became their sponsor and almost 800 since its founding in 1980- with the Tour de France as its major goal. 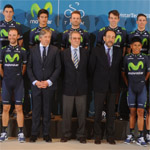 – The team will feature four new faces: Marc Soler, Rubén Fernández, Winner Anacona and Rory Sutherland, and maintains its main block, with Nairo Quintana and Alejandro Valverde as leaders.
– The Movistar Team aspires to achieve further titles -116 since Telefónica became their sponsor and almost 800 since its founding in 1980- with the Tour de France as its major goal. 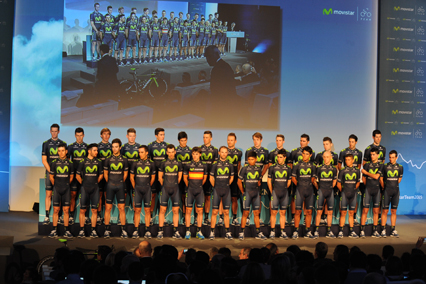 Madrid, January 9 2015.- For the fifth consecutive year, Telefónica and the Movistar Team have gathered today in the Central Auditorium of Madrid’s Distrito Telefónica in order to officially present its squad for the 2015 season. The team’s 28 riders have shown off the blue jersey they will be wearing throughout Movistar’s fifth campaign at the frontline of the international elite.

The event was attended by César Alierta, Executive Chairman of Telefónica, Carlos López Blanco, Global Head of Public Affairs of Telefónica, and Eusebio Unzué, the team’s manager. Also, the presentation brought together biking enthusiasts such as the chef Ferran Adrià and the athletes Perico Delgado and Chema Martínez, who collaborated with journalist Javier Ares in presenting the team.

The new squad has one more rider than last year, and with regard to team members, stability has been the keyword in the 36th Telefónica team. Four names -the Australian veteran Rory Sutherland and the young Winner Anacona, who won one of the stages in the last Vuelta a España; Rubén Fernández, winner of the Tour del Porvenir 2013; and Marc Soler, the most promising amateur in the last campaign- make up a squad that retains its leading figures, with three national champions -Alejandro Valverde, Ion Izagirre and Adriano Malori- and an average age of 27.

The team, which will be riding their fifth season under the Movistar name, aim to continue to extend their list of titles -116 since Telefónica became their sponsor, and almost 800 since the team’s foundation in 1980- in which the Tour de France will once again be the major goal of a squad with seven yellow jerseys to its name.

The Vuelta a España and other Spanish events programmed add to a sporting calendar that includes the most select of the European circuit, as well as tours in America, Australia, and an extensive tour of Midwest Asia (Dubai, Qatar, Oman) as the newest features at the start of this campaign, where Briton Alex Dowsett will also attempt to break the hour record in the Olympic velodrome in London at the end of February.

The Movistar Team has won the ICU World Tour two years in a row, an achievement that distinguishes the most able, consistent team at the highest level, in addition to Alejandro Valverde’s third individual title. The Movistar Team was also victorious in the last Giro d’Italia with Nairo Quintana.

“To be able to count on Telefónica’s growing support in this fifth season fills us with pride,” says Unzué. “In Nairo we have a leading sports figure who has broken records and managed to adapt to the responsibilities of a leader with an ease that continues to surprise us. Behind him we have a group of riders that are young but command a great deal of seniority, to back him up, and also to take the lead at specific times. The pièce de résistance is to be able to have a leader like Alejandro, capable of responding virtually everywhere we go, and the support of great team management, and an unbeatable group of professionals behind the scenes. We believe that we can once again take a step forward and aspire to win the Tour, although fortunately there are many objectives that the world of cycling allows us to pursue: the Vuelta, the classic cycling races, Dowsett’s hour record or the WorldTour, which we have won in the last two years, thanks to a superior collective level. Good reasons abound to be optimistic in 2015“.

In his speech, Carlos López Blanco, the Global Head of Public Affairs of Telefónica, took stock of the efforts over the last five seasons, and he highlighted the fact that in 2014, after riding around 314,666 kilometres, the equivalent of nearly 8 laps around the world, the team had achieved 34 victories, and emphasised Nairo Quintana’s excellent results as winner of the Giro and Valverde, whilst achieving a fourth-place finish in the Tour de France. López Blanco also pointed to the leadership role that Movistar has played on the international cycling circuit, and referred to the various projects undertaken by Telefónica in order to support and promote cycling and cycling techniques among fans.

Throughout 2014 there have been multiple actions online and on social networks aimed at cycling fans, especially in conjunction with the team, both in major and smaller tours. These participatory activities and games have gained more than 33 million hits.

Events on social networks carried out in collaboration with the Movistar Team have had some excellent results, and their channels’ fans and followers have increased considerably in 2014, reaching 316,527 by the end of the year. Video views on Movistar Team’s premium Youtube channel have also been a success, achieving 1.7 million plays by the end of 2014.

Aside from this, the Bike&Go mobile application has become a must-have app for lovers of cycling, and has been steadily improving, incorporating the ability to be used on different wearables. Bike&Go has also become more social, and gamified, by allowing users to compete with each other.