Accelerating popularity of Application To Person (A2P) SMS by businesses and organisations fuelling global growth in SMS usage - evidenced by 22 per cent global growth in the A2P business at... 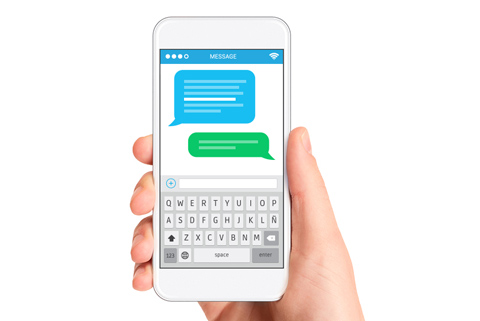 London/Madrid, 12 July 2016- Global use of SMS as a channel for business communications will continue to grow over the next 10 years as more organisations adopt A2P (Application to Person) services and integrate them into their digital communications, according to a report released today by Telefónica.

The report, an investigation into the enduring success and economy drivers of the SMS market in 2015, investigates the development of SMS and its application for business, finding that the ability of SMS to reach 99.99 per cent of mobile devices globally with a 90 per cent read rate[i] in minutes, makes it perfectly placed for businesses to reach customers regardless of geography and demographic.

The exponential growth in popularity of digital and mobile services, especially in developing markets such as Latin America and Asia, has created a worldwide market where 8.3 trillion text messages are sent annually[ii]. As businesses embrace the opportunities of this market and integrate mobile into their digital services, SMS has emerged as a valuable tool for 1-to-many business messaging, providing a simple, effective and ‘on the move’ way of updating customers.

James Lasbrey, Global Head of Messaging at Telefónica, said the report shows that despite the enormous popularity of the app economy for P2P (person-to-person) communications, the size and scale of opportunity in the SMS market has solidified its position as a valuable and attractive market for businesses, evidenced by 22 per cent global growth in the A2P or bulk SMS market in 2014-15.

He continues: “The value of 1-to-many business messaging has hit its stride in a big way. Text messaging has been part of our lives for more than 20 years, making it an intuitive, trusted and effective form of communication for most people. While the market has developed with the success of free apps such as WhatsApp, Snapchat and Facebook Messenger, the potential of SMS for business is unrivalled.  I expect to see wide scale adoption of A2P by businesses worldwide looking to communicate effectively with customers to 2025 and beyond.”

The report includes examples of real-life use cases, including Virgin Trains application of A2P communications to manage peak hour commuter.  “Virgin Train’s use of SMS for crowd management gives a great example of mobile engagement between an enterprise and its customers, and helps differentiate Virgin Train’s service from other transport operators” said Giovanni Benini of OpenMarket, who contributed to the report.

“We can expect to see continued use of these services across various industries to cut through the information clutter on our mobile devices and provide personalised information to customers right at the time they need it.”

The study puts the success of business SMS down to the fact that it reaches the vast majority of consumers, proactively in their moment of need, and doesn’t require the receiver to have downloaded and subscribed to a particular application.  Furthermore recent studies drawn on show the potential for business across sectors such as banking, travel and transport, retail and healthcare to be enormous with growth of the A2P market expected to grow to 2.19 trillion messages[iii] and US$ 50 billion in revenue by 2018[iv] as a broader range of organisations, including SMEs and government bodies, capitalise on its potential.

It also touches on the use of SMS in security and fraud prevention as an authentication method which has risen in popularity from social media registration to financial services 2 factor authentication.

“The financial services industry is leading the way in use of A2P in terms of overall usage and our figures show that SMS is being used more often than app-based messaging for customer engagement” said Joanne Lacey, COO of MEF, who also contributed to the report. “Interestingly nearly one quarter of consumers have never received an SMS from a business, indicating an opportunity for continued growth in this channel. Our focus is on developing a framework for a clean and transparent ecosystem to ensure a sustainable future of messaging.”

The report is available for download here: http://bulkmessaging.telefonica.com/ and here.

The company has a significant presence in 21 countries and over 322 million accesses around the world. Telefónica has a strong presence in Spain, Europe and Latin America, where the company focuses an important part of its growth strategy.