- Jorge Lorenzo has collaborated on the design of the new Movistar trophy for the Aragón Grand Prix. 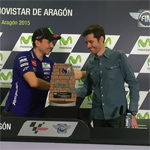 – Jorge Lorenzo has collaborated on the design of the new Movistar trophy for the Aragón Grand Prix. 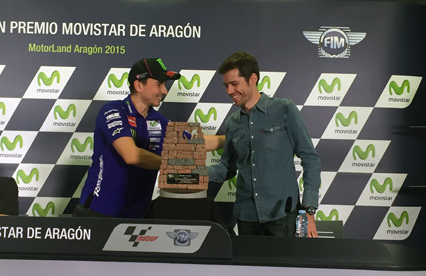 Madrid, 24 September 2015. Movistar has presented a new trophy to be awarded to the winners of the MotoGP Aragón Grand Prix, which will be held from 25 to 27 September at the circuito Motorland Aragón, in Alcañiz (Teruel, Spain).

The new trophy has benefited from input from Jorge Lorenzo, a rider with the Movistar Yamaha MotoGP team, who first suggested changing the trophy of this World Championship race. The trophy is the work of Marc García Rojals, an internationally recognised designer and creator of many other prizes in the world of motor sport.

The sportsman met García Rojals at Montmeló, and together, they laid the foundations for the format of the new trophy. The designer asked Lorenzo what features came to mind when he thought of the Alcañiz Circuit. There was no doubt in his mind – it was the emblematic wall by a stretch of the track.

Therefore, after working on different forms and positions of the Movistar logo, a trophy design which represents a fragment of the aforementioned wall on a pedestal, was chosen. The process of shaping the new trophy had several phases. Firstly, a mould was made out of plaster, which was then filled with a mixture of resin and concrete. Once the mixture had solidified, the trophy was painted using the dry brush technique in order to reproduce the colours of the wall on that section of track as closely as possible. Finally, a sheet of carbon was added to the back of the trophy to represent the asphalt of the track.

A stainless steel plaque is set into the wall, which contains all the details of the Grand Prix and which category the prize is for. In addition, on both sides of the trophy, there is a silhouette of the Movistar logo.

Movistar and its link to motorbikes

In addition, as of last year, Movistar is the sponsor of the Movistar Yamaha MotoGP team, and will be for the next four years. This team includes the world champions Jorge Lorenzo and Valentino Rossi.