Loon and Internet para Todos Perú (IpT) have reached an agreement to use high-altitude balloons to expand mobile internet access to parts of the Peruvian Amazonia. The companies aim to provide service to Telefónica customers in Peru in 2020. Loon is a subsidiary of Alphabet, the parent company of Google. IpT Perú is an open access wholesale rural mobile infrastructure operator owned by Telefónica, Facebook, IDB Invest and CAF which aims to help bridge the digital divide bringing mobile internet to remote populations where conventional telecom infrastructure deployment is not yet economically feasible. 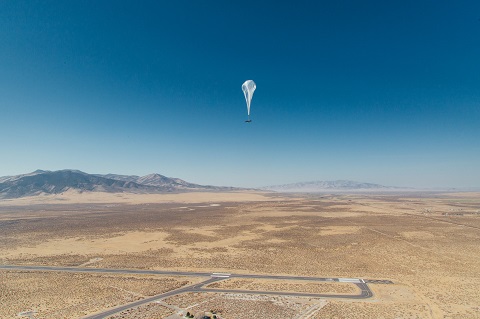 MOUNTAIN VIEW, CA / LIMA, PERU, November 21st 2019.- Loon and Internet para Todos Perú (IpT) have reached an agreement to use high-altitude balloons to expand mobile internet access to parts of the Peruvian Amazonia. The companies aim to provide service to Telefónica customers in Peru in 2020. Loon is a subsidiary of Alphabet, the parent company of Google. IpT Perú is an open access wholesale rural mobile infrastructure operator owned by Telefónica, Facebook, IDB Invest and CAF which aims to help bridge the digital divide bringing mobile internet to remote populations where conventional telecom infrastructure deployment is not yet economically feasible.

Loon and IpT will work together to serve parts of the Loreto Region (Peruvian Amazonia), one of the largest and most remote regions in the country, providing Telefónica customers with mobile internet coverage. According to Osiptel, the Peruvian telecom regulator, Internet penetration in Loreto is 100 times lower than in Lima.

Loon and IpT will initially provide service in certain locations that make up around 15 percent of Loreto’s area and where nearly 200,000 people live. About a quarter of them lack 3G or better service, and many others lack any reliable mobile service at all outside of populated areas. The deployment of Loon in Peru will make it the first country in Latin America to use this innovative connectivity solution on a sustained, non-emergency basis.

Loon and Telefónica in Peru started collaborating in 2014 when early tests of Loon´s technology began. In 2017 when the El Niño floods devastated parts of Northern Peru, Loon worked with Telefónica to provide Internet connectivity to those in need in an area over 40,000 Km² in size. Earlier this year when a magnitude 8.0 earthquake struck Peru, the two companies were able again to provide emergency connectivity. This agreement marks an important milestone in their collaboration and the result of the extensive work by the Loon, Telefónica del Perú and IpT teams over the last few years.

Launched last May, Internet para Todos Perú is a neutral-host Rural Mobile Infrastructure Operator in Peru focused on offering mobile internet connectivity in rural areas to any Mobile Network Operator (MNO) willing to use its services on a wholesale basis. With a strong focus on innovation to provide sustainable service, IpT will leverage Loon for hard-to-reach areas, complementing its terrestrial network and, initially, managing the service for Telefónica del Perú, first MNO to use the technology on a commercial basis in Latin America.

More than 800,000 people living in around 5,300 rural communities in Peru have now access to mobile internet thanks to IpT. The aim is to connect over 30,000 communities by 2021 for the bicentennial of Peru.

To enable service, Loon’s balloons receive a signal from the ground, which is then shared across multiple balloons that spread it to users below using standard LTE signals. When a balloon is ready to be taken out of service, the lift gas keeping it aloft is released and the parachute automatically deploys to control the landing. Descents are coordinated closely with local air traffic control, and balloons are landed in a sparsely populated area. Recovery teams then collect the balloon and equipment for recycling. Loon has already landed hundreds of balloons in Peru over years of testing in the country.

Because this is a first-of-its-kind deployment for sustained service via stratospheric balloons in Peru, Loon, IpT and Telefónica collaborate on securing regulatory approval from Peru’s Ministry of Transport and Communications (MTC) before launching service.

Peru joins Kenya as the second country where Loon has signed a contract to expand the service of Mobile Operators using stratospheric balloons. In Kenya, Loon is awaiting final written regulatory approval to begin flying and conducting the final stages of network integration with Telkom Kenya.

“Loon would not be where it is today without Peru. Over years of testing in the country, we have achieved many milestones that have proven our technology, connected people in need, and accelerated the growth of our business. We’re grateful for the opportunity to continue working in Peru on a sustained basis, and we look forward to partnering with IpT and Telefónica del Perú as we continue to work toward our mission of connecting people everywhere.”

“Internet para Todos was born with the purpose of connecting millions of Latin Americans, including 6 million Peruvians without adequate access to mobile internet. This challenge involves reaching difficult access areas with innovative and sustainable technologies that allow us to overcome geographical, technological and economic complexities. Thanks to this agreement with Loon, we will extend the mobile internet access to more Peruvians with disruptive technology”.

“At Telefónica we have a very strong commitment to bring equal opportunities for everyone in Peru by giving access to mobile internet. Since 2014, we have been testing the deployment of innovative technology with Loon, which we were able to use on two occasions to connect areas in emergency. In this way, we are proud of pioneering the use of disruptive technologies like this to improve the availability, quality and coverage of 4G mobile internet access in the country”.

Loon’s mission is to connect people everywhere by inventing and integrating audacious technologies. By leveraging these advanced technologies, Loon is making it possible to expand internet access to the billions who currently lack it. Loon works with a range of partners to expand and supplement existing networks and enable new solutions that will meet the connectivity needs of the future. To date, Loon’s stratospheric balloons have travelled more than 40 million kilometers around the world and connected hundreds of thousands of people. Loon is a subsidiary of Alphabet, the parent company of Google.

IpT was launched in May 2019 as a neutral-host Rural Mobile Infrastructure Operator in Peru focused on covering with Mobile internet rural areas in Peru for any MNOs willing to use its services. With a strong focus on innovation to provide sustainable service, IpT will leverage Loon for unreachable areas, complementing its terrestrial network and, initially, managing the service for Telefónica.

Telefónica has 25 years since its arrival to Peru, operates commercially under the Movistar brand and has about 20 million customers. Telefonica has invested more than S / 30,000 million since it began operations in the country. The company has an economic impact equivalent to 1.8% of GDP. Since 1994, Telefónica has paid more than S /. 9,300 million in Income Tax, being one of the main contributors of the country. Telefónica is a socially responsible company, based on initiatives such as Fundación Telefónica, Wayra, ConectaRSE para Crecer, Somos Grau, Recíclame, among others. Telefónica is committed to the transformation and digital inclusion of Peru.