José María Álvarez-Pallete, Chairman and CEO of Telefónica, today reviewed the results for the year 2018 at the General Shareholders' Meeting of the company, which is being held today in Madrid. 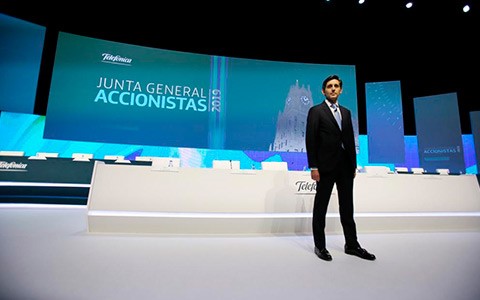 Madrid, 7th June 2019. José María Álvarez-Pallete, Chairman and CEO of Telefónica, today reviewed the results for the year 2018 at the General Shareholders’ Meeting of the company, which is being held today in Madrid. He highlighted the growth and fulfilment of targets despite the effort that represents advancing in the process of transformation. “As I said to you here a year ago: `we want to grow in revenue´, and we are growing; `we want to increase margins´, and we are increasing them; `we will continue to invest to have the best platforms´, and we are doing so. In short, we kept our promise”, he said.

Álvarez-Pallete described the year 2018 as “a year that lives up to the trajectory of our 95-year history” and recalled how the company has crossed the equator of its transformation process precisely during this period. “Your company is considerably stronger today than it was three years ago, and we are convinced that the true value will be reflected in the share price,” he assured.

He also pointed out how Telefónica’s team of professionals has managed to step up the pace of growth, not only in the main financial figures, but also in terms of customers, up to 9 million more in the last three years and with whom we have a higher value relationship. In addition, throughout the year, the company has maintained a high investment rate, up to 83 billion euros since 2012, and has reduced debt by 14 billion euros from June 2016. It has also maintained shareholder remuneration, with a dividend of 0.4 euros per share, which is highly covered both in terms of profit and free cash flow.

Telefónica works in building a company for the next 20 or 30 years. From a perspective of generating long-lasting value, the company considers essential to create a strong relationshipe based on trust with all its stakeholders and drive inclusive and sustainable growth. Efficiency is also a requirement, in which the digitalization and asset management strategy, based on optimizing return on capital employed, are key.

In addition, José María Álvarez-Pallete explained that the importance of trust, growth and efficiency depend to a large extent on Telefónica´s employees and their motivation. “Our team is increasingly trained and reflect a growing diversity and gender balance”, he added.

The transformation process, accelerated in the last three years, has already turned Telefónica into a technological company.  A company that will be at the forefront of fiber and 5G networks when it reaches its centenary. It will be a pioneer in simplification and efficiency, with 100% digitalized systems, 100% customer-centric and a leading company in the creation and distribution of digital products and services. “It will be a company -Álvarez-Pallete explained- that acts as a profoundly intelligent network at the service of the customer thanks precisely to Artificial Intelligence and imbued with the values ​​of the new digital world”.

He also recalled that Telefónica’s genuine purpose is “to make our world more human by connecting lives”, that is, to ensure that people and societies can benefit from the digital revolution and not be overwhelmed by it or be left behind. “Companies whose overarching value does not include contributing to the development of societies are destined to disappear” said the Chairman and CEO of the company. Telefónica’s activity contributes to social development in many ways: it has an impact   of over 53 billion euros on the GDP in the countries where it operates, a fiscal contribution to the public budget of more than 10 billion euros, that is, 21 euros for every 100 euros invoiced, and more than 1.2 million direct and indirect jobs.

José María Álvarez-Pallete also highlighted the relevance of knowing how to adapt to change and pointed out in his speech that “while people’s life expectancy increases, companies’ life expectancy decreases. And when analyzing what trait those companies that survive share, a common denominator appears: the capacity for change. If we have come this far, it is because we knew how to change”.

Finally, the Chairman and CEO of Telefónica described to the AGM the main advances made in the last three years in terms of corporate governance, such as increasing the independence of the Board of Directors, reducing the number of directors and increasing diversity. He also highlighted a most engaged relationship the company has established with shareholders, through letters and meetings, among other initiatives undertaken by the Shareholder Office. In this regard, and starting next July, Telefónica shareholders who are also customers will enjoy a differential program that will offer personalized attention.

Click here to read the speech of José María Álvarez-Pallete, Chairman and CEO of Telefónica

The General Shareholders’ Meeting of Telefónica is a sustainable event certified by AENOR according to ISO 20121: 2012