The Spain-U.S. Chamber of Commerce recognizes Telefónica's Chairman & CEO for his leadership at the helm of the company 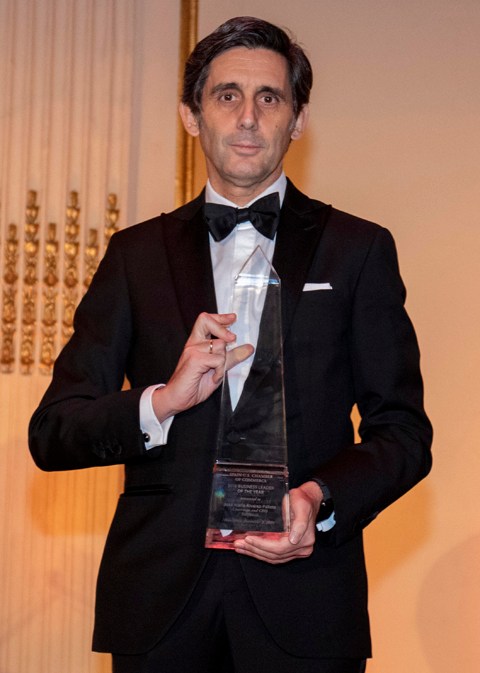 The Spain-U.S. Chamber of Commerce recognizes Telefónica’s Chairman & CEO for his leadership at the helm of the company

New York, December 3, 2019. José María Álvarez-Pallete, Chairman & CEO of Telefónica, received today the Business Leader of the Year award from the Spain-U.S. Chamber of Commerce in recognition of “his vision and leadership at the helm of the company.”

In particular, the Board of Directors of the institution recognized Álvarez-Pallete “for his ability to face the challenges of continuous technological innovation, leading the digital transformation of the company that has gone from being a telecommunications firm to a technological group.”

In addition, Alan Solomont, Chairman of the Spain-U.S. Chamber of Commerce and former U.S. Ambassador to Spain, noted that, under Álvarez-Pallete’s management, “Telefónica has reached strategic agreements of great value and has demonstrated the business excellence, innovation and customer commitment necessary to transform a telecommunications giant in an era of continuous technological and digital changes.”

The Chairman & CEO of Telefónica thanked the Spain-U.S. Chamber of Commerce for this important recognition. He also congratulated the Chamber, which is celebrating the 60th anniversary of its creation this year, for “the important work that this institution has been doing over the years to foster economic and business ties between the two countries.”

During his speech, José María Álvarez-Pallete explained how the digital revolution is changing every aspect of our lives and went through the enormous opportunities opened up by new technologies: “Never in the history of humanity has such an accumulation of technology existed.” He also stressed the challenges that all this implies and stressed that “now is the time to manage the transition to the new digital economy, to put citizens and their rights at the center of this new world and ensure that no one is left behind.”

José María Álvarez-Pallete also highlighted the “incredible” transformation made by Spain in the last 40 years in terms of social advances, deployment of infrastructure, and the economic growth that has allowed the country to “multiply its GDP per capita by 15 since 1978.”

The award ceremony took place during the annual gala of the Chamber of Commerce in New York and brought together more than 300 representatives of the worlds of finance, business, politics, culture and social sectors, from both the United States and Spain.

The award, which was presented by the Chairman of the Spain-U.S. Chamber of Commerce, Alan Solomont, honors business leaders who have made a significant contribution to the economic growth of Spain or the United States and the improvement of business relations between the two countries.

Early in the morning, José María Álvarez-Pallete opened trading on the New York Stock Exchange with its well-known “Opening Bell”.

Telefónica is one of the world’s largest telecommunications companies in terms of market capitalization and number of customers, supported by a comprehensive offer and the quality of connectivity provided by the best fixed, mobile and broadband networks. It is a growing company that offers a differential experience, based both on the values of the company itself, and on a public positioning that defends the interests of the client.

Present in 14 countries and with more than 346 million accesses, Telefónica has a strong presence in Spain, Europe and Latin America, where it concentrates most of its growth strategy. Telefónica is a wholly private company whose shares are listed on the continuous market of the Spanish Stock Exchanges and on the New York and Lima Stock Exchanges.

About the Spain-U.S. Chamber of Commerce

Founded in New York in 1959, the Spain-United States Chamber of Commerce encourages economic relations between the two countries and has become one of the most important transatlantic business organizations in the world. The Chamber is a non-profit institution that encourages commerce and bilateral investment. It represents the interests of the businesses that have established, or are interested in establishing commercial and business relations between Spain and the United States.