- This year, awards have been given in the three highest categories, recognizing Alcampo as the best Large private enterprise; the Irrintzi Driving School in Biscay, as the best Small private enterprise, and the University of Murcia, as the best Public sector organisation. - The prize in the new category for "Innovation for inclusion", dedicated to entrepreneurs and/or startups that develop products and services for the disables, dependent of chronically ill, has been won by the company Irisbond for their solution to allow computer screens to be controlled with a person's eyes. 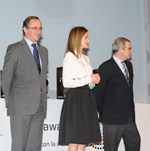 – This year, awards have been given in the three highest categories, recognizing Alcampo as the best Large private enterprise; the Irrintzi Driving School in Biscay, as the best Small private enterprise, and the University of Murcia, as the best Public sector organisation.
– The prize in the new category for “Innovation for inclusion”, dedicated to entrepreneurs and/or startups that develop products and services for the disables, dependent of chronically ill, has been won by the company Irisbond for their solution to allow computer screens to be controlled with a person’s eyes.

Madrid, 12 January 2015.- Her Majesty the Queen Letizia has presided over the formal celebration of the third edition of the Telefónica Ability Awards, which recognise and value companies and agencies that best integrate disability into their business model.

In the gala, which took place in Distrito Telefónica, the company’s headquarters in Madrid, the Queen was accompanied by the Minister for Health, Social Services and Equality, Alfonso Alonso, and the President of Telefónica, César Alierta.

The act was hosted by the journalist Mara Torres, and the actor Hugo Arizmendiz, and was attended by over 350 guests, including representatives from the Government and the Autonomous Communities, personalities from Spanish cultural and political life, representatives from trade union organizations, prominent members from the business world as well as the field of disability and the media.

Telefónica’s president, César Alierta, stated in his speech that it is an honour for the company to organise these awards for the third time. In his opinion, “digital technologies play a key role in society when it comes to opening up new opportunities and improving the quality of life of people with disabilities, by providing greater autonomy and breaking down traditional physical barriers”.

“A company must be open and inclusive, and it is this proud conviction that guides Telefónica’s work. Experience shows us that disability need not be an impediment when it comes to incorporating valuable talent as part of a team. In this sense, both institutions and businesses have a responsibility to demonstrate that disability can provide clear value to the company and have a positive impact on society as a whole,” added Alierta.

The prizes, a sculpture by Irish artist Shane Holland, were awarded to the winners by Her Majesty the Queen of Spain. The winners were selected by the Final Jury, made up of the awards’ Board of Trustees – chaired by César Alierta and made up of nearly thirty personalities and representatives from ministries, universities, trade unions, disability foundations and various associations from the business and social sector- and the three winners in the highest categories in the first two editions were: Repsol, Línea Directa, Hotel Plaza Entremares, Seguros Pelayo, Aena and the University of Valencia.

The role played by PwC Spain, which acted as an independent verification body and collaborating partner, has been essential throughout the process, which began on 19 February, 2014.

In this third edition of the Telefónica Ability Awards, prizes have been given to the following enterprises and entities:

In the four Highest Categories, the winners were: Alcampo, as best Large private enterprise; the Autoescuela Irrintzi S. L driving school, from Basauri (Biscay) as the best Small, private enterprise, and the University of Murcia, as the best Public sector organization. In the new Innovation for Inclusion category devoted to social entrepreneurship, the start up Irisbond, based in San Sebastián, was recognised for their solution allowing users to control a computer screen with their eyes.

In the Main Categories, six different initiatives have been rewarded:

Commitment and Leadership of top management, the award recognising the organisation that has best integrated people with disabilities into their strategy, was won by the company Sanitas;

Recruitment and hiring, the award for the organisation that is most engaged in hiring and attracting people with disabilities, was won by Indra;

Accessibility, the award for the organisation providing the most secure, accessible and convenient environment in its facilities, was won by Kurhotel Mar y Sol S. L (Sta. Cruz de Tenerife);

Customer guidance, which rewards the organisation that best excels in developing products and/or services aimed at people with disabilities, was won by the Catholic University of Valencia San Vicente Mártir;

Professional development and training, which recognizes the organization that best ensures that every employee has the same training and promotion opportunities, was awarded to Bankinter S.A.;

Prevention and retention, for the organisation that best establishes the necessary means to prevent sudden disability and retains employees who acquire a permanent disability, was won by Mahou San Miguel.

Prior to the event, the finalists, considered “Ability Companies or Organizations”, received a Diploma and a report on the process of their on-site assessment. Furthermore, they will join the winners in becoming part of “Club Ability”, a common interest network for exchanging best practices and generating knowledge.

Telefónica has once again acted as a facilitator and integrator, helping the work of the Ability Board of Trustees, which has been the real engine in achieving the basic goal: to change attitudes towards the world of disability.

More information on the Telefónica Ability Awards: https://www.fundaciontelefonica.com/noticias/conoce-a-los-ganadores-de-los-telefonica-ability-awards/ and www.twitter.com/ability_awards