César Alierta: “Telefónica maintains its firm commitment to remunerate its shareholders, a clear priority for our company”

- Remuneration for Telefónica shareholders in 2015 amounted to 0.75 per share, in cash and as a scrip dividend, and by means of the amortisation of 1.5% of capital in treasury stock. At current prices, it represents a 5.8% yield, the highest among leading telecommunications companies. - In his speech to shareholders, Alierta highlighted the increase close to 30% of Telefónicas share price since early 2013, when the Company began its process of transformation into a Digital Telco. 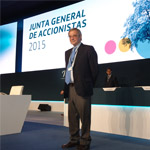 – Remuneration for Telefónica shareholders in 2015 amounted to 0.75€ per share, in cash and as a scrip dividend, and by means of the amortisation of 1.5% of capital in treasury stock. At current prices, it represents a 5.8% yield, the highest among leading telecommunications companies.
– In his speech to shareholders, Alierta highlighted the increase close to 30% of Telefónica’s share price since early 2013, when the Company began its process of transformation into a Digital Telco. 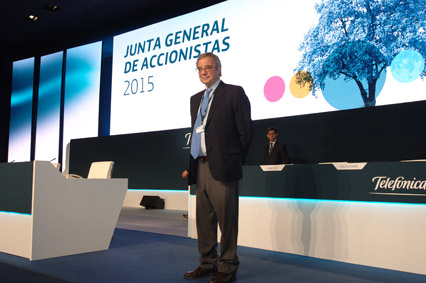 Madrid, 12 June 2015. The Telefónica General Shareholders’ Meeting has approved today all the resolutions proposed by the Company’s Board of Directors; among them, the first tranche of dividend to shareholders for 2015 for the amount of 0.35€ per share and payable in the fourth quarter of the year as a scrip dividend. For the second tranche of 0.40€, which will complete the annual dividend of 0.75€ per share and will be paid in cash in the second quarter of 2016, the Company will propose the adoption of the appropriate corporate resolutions in due course.  Company shareholders have also approved the amortisation of 1.5% of capital in treasury stock.

In his speech, César Alierta, Executive Chairman of Telefónica, assured shareholders that “Telefónica maintains its firm commitment to remunerate its shareholders, a clear priority for our Company” and highlighted that the  remuneration announced for 2015 constitutes a 5.8% yield at current share price[1], making it the “highest return of any of the major telco players”. Thus, in line with this commitment, for 2016 Telefónica has announced its intention to propose the distribution of a dividend of 0.75 euros per share in cash and a new amortisation of treasury stock of 1.5%, depending both on the closing of the proposed sale of  O2  in the UK.

He reminded that Telefónica shares had experienced an increase of 9.3% since the beginning of the year, which amounts to an appreciation of nearly 30% since early 2013, when the process of transformation of the company began. This increase in share price, together with the dividends paid out over the last period, amounts to a total shareholder return of more than 40%.

Alierta also highlighted the relevance of management during 2014, which was “a year that marks the culmination of a period of intense transformation and in which we have taken great strides towards becoming a leading Digital Telco, in an industry that opens opportunities for us all”.  In this regard, the Executive Chairman stressed that the success of the transformation process has had a lot to do with the important progress made in capitalising on the opportunities offered by digitalisation – as is the case with the monetisation of data and digital services – and with the significant boost provided by technological progress, which has enabled the company to have high-speed broadband networks in all its markets. That is the reason why, in 2014, Telefónica made a record number of investments, amounting to almost 9.5 billion euros, in order to prepare for the needs of its customers, while it consolidates the organic growth of its investments, thanks to the widespread adoption of higher value services, among other things.

César Alierta also mentioned the importance of the thorough review of the company’s assets, as well as its repositioning in the key markets it operates in. “First, we led the intra-market consolidation in Europe, and in 2015 we did it again in Brazil, with acquisitions that create value and have significant potential to generate synergies”, he explained in reference to the acquisitions of e-Plus in Germany and GVT in Brazil.  And in this regard, “in just over two years we have managed to strengthen our balance sheet quite significantly, by reducing our debt by more than 13 billion euros by the end of 2014”, he added.

The Digital Revolution: A Great Opportunity

The Digital Revolution, which César Alierta today called “the greatest revolution in the history of mankind”, opens up new opportunities for everybody and every industry, and it is in this ecosystem that the digitisation of the economy represents a key factor in gaining competitiveness and boosting growth, thereby influencing countries’ levels of welfare and development.  And as the Executive  Chairman of Telefónica explained in his speech at the Company Shareholder’ Meeting, “networks lie at the core of this entire new economy, since they have become the primary infrastructure for fostering economic growth.  Therefore, the telecommunications industry is a key player for the future”, he added.

Hence, precisely in order to capitalise on the opportunity which the digital revolution offers, Telefónica continues to make progress towards becoming a digital telco and, thanks to significant organisational changes, it continues striving to integrate traditional and digital elements, in order to increase revenue and set the benchmark for efficiency once again.  Furthermore, “the digital economy needs new digital infrastructure, which requires significant investment from operators”, César Alierta pointed out.  “Regulation also needs to adapt to this requirement, by creating a more favourable environment for investment, by means of a simplification of access regulation which will provide greater commercial flexibility and will promote cooperation and risk-sharing.”

A Green Light for all the resolutions

As well as the approval given to the annual accounts and the management of the Board of Directors’, shareholders agreed today amendments to the Company’s bylaws and the General Shareholders’ Meeting Regulations in order to adapt them to the reformed Spanish Corporate Law.  They also agreed to delegate to the Board of Directors the power to increase capital stock in accordance with law, among other points.