We join the Earth Hour. Would you like to join us?

Once again, Telefónica will be joining Earth Hour and we would like you to join too.  The initiative's slogan for 2015 is "Use #yourpower. Change Climate Change"... 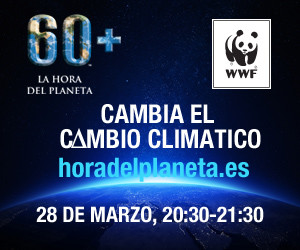 Once again, Telefónica will be joining Earth Hour and we would like you to join too.  The initiative’s slogan for 2015 is “Use #yourpower. Change Climate Change”. As has become tradition, WWF invites us to symbolically turn off all our lights for one hour tomorrow Saturday, 28 March from 20:30 to 21:30.

This year the event will take on special importance, as in December there will be an international meeting in Paris bringing together governments around the world whose challenge is to sign a new agreement to protect the climate which will replace the Kyoto Protocol.

Our company has programmed different activities in almost all the countries where we are present. For example, in Spain, we will turn off the lights on the main façade of our corporate headquarters located in Madrid, on the Gran Vía. In Germany, Chile, Colombia, Mexico, Nicaragua, Peru, Ecuador and Germany the same will be done at the main headquarters; in the UK the blackout will include all their shops and in Brazil it will affect the 21 administrative buildings.

Furthermore, a number of Telefónica companies will launch initiatives to raise awareness: in Brazil, an SMS will be sent to 1 million customers, the commercial web pages of Mexico are adding their customers to a counter until it is time for “The Hour”, the United Kingdom has added a notification to screens in their stores about Earth Hour, and Nicaragua will promote a cultural meeting about the environment. Venezuela, under the slogan “The only light that shines is the one from the stars” will launch messages to employees and customers to raise awareness against climate change. Ecuador, for its part, will spread, through social networks, messages and tips to promote friendly actions to take care the environment. And Peru will host a concert to support the initiative.

Since it was created in 2007, Earth Hour has achieved the participation of more than 7,000 cities and millions of citizens from 160 countries, thousands of companies and organisations, adding their voice to demonstrate that a different future is possible. Telefónica contributes to this through its Office of Climate Change and Energy Efficiency. To this end, since 2010, the company has implemented more than 100 energy efficiency projects, preventing the emission of approximately 50,000 tonnes of CO2eq and every year we enhance green services as one of the keys to a low-carbon economy, through, for example, the Smart Cities projects.

What are you going to do during those 60 minutes? Tell us about it with the hashtag #EarthHour at @TEF_Green , @RCySost our Facebookpage. More information on Telefónica and green topics: http://ow.ly/L18Mi