The five reasons that will make you join Earth Hour

Telefónica joins, once again, the international initiative against climate change “Earth Hour”, promoted by WWF. With the motto “Turn Off and Connect for the Planet”, it invites us to symbolically turn off our lights next Saturday between 8:30 and 9:30 pm to remind us that joining the fight against climate change is urgent and that we need to start acting now.

Telefónica joins, once again, the international initiative against climate change “Earth Hour”, promoted by WWF. With the motto “Turn Off and Connect for the Planet”, it invites us to symbolically turn off our lights next Saturday between 8:30 and 9:30 pm to remind us that joining the fight against climate change is urgent and that we need to start acting now.

Telefónica will turn off the lights of its most emblematic buildings, and will invite employees and customers to join an action in which more than 35,000 companies, two billion people, and more than 7,000 cities participated last year.

Because we can all do something against global warming. A company like ours by reducing its carbon footprint, promoting the use of renewable energies, and taking advantage of digitalization as much as possible in order to decarbonize the economy with solutions for companies and cities that make it possible to reduce the use of energy and other natural resources.

With the concept #ITurnOffFor, WWF encourages us to choose a cause for which to turn off the lights. Here are a few ideas from which to choose: 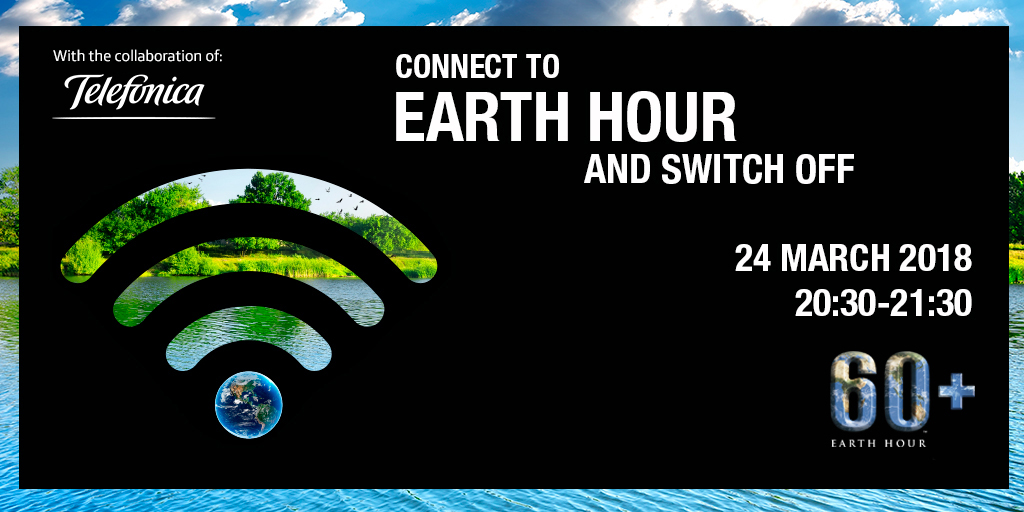 We need 1.6 planets to satisfy our current demands

Humanity is living beyond its means. Each year we consume a quantity of natural resources equivalent to 1.6 planets, but we only have one. Until when will the Earth be able to continue supporting our rhythm of destruction? Because if we continue the current trend, by 2020 we will need 1.75 planets, and 2.5 by 2050, and that’s just unsustainable! Those are just some of the alarming data revealed by the Living Planet Report, prepared by WWF.

The increase in frequency and intensity of heat waves during summer is one of the clearest reminders that climate change is already here. Spain is one of the most vulnerable countries to this global threat due to its location in the Mediterranean basin. Specifically, if we continue with the current trend, the climate change scenarios for our country forecast an increase in temperatures of up to 4ºC in winter and 6ºC in summer by the end of the century.

Because of this, the world took action against climate change in 2015 by signing the Paris Agreement with the goal of keeping the increase in temperatures below 2ºC, and to do everything possible to keep this increase below 1.5ºC. But we need much more ambition in order to achieve it!

The reduction of water in summer will be up to 40% 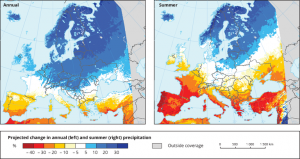 Despite the shocking images of empty reservoirs, the taps in our homes have continued to run, and we seem to forget the drought with the arrival of the winter rains. But the drought will not go away.

All it takes is a quick look at this map with the precipitations forecast in Europe to see an alarming red for all Mediterranean countries. It’s raining less and less, and less water flows through our rivers, but the reduction in rain will reach extreme levels (up to 40% in summer) if we don’t act against climate change. We will have to take measures before it’s too late if we don’t want to reach this situation. Let’s take care of the scarcest and valuable resource that we have!

The effects of climate change on nature are very visible. And we don’t have to go very far to notice them. We’re already experiencing its impacts in Spain. Increasingly high temperatures, extended droughts, extreme meteorological phenomena… The frequency and intensity of these extreme episodes are already increasing due to the effects of global warming. Félix, the storm that just hit Spain, is just an example of this. Let’s act before it’s too late!

Wildlife has been reduced by half in less than a generation and climate change can take many already threatened species to the brink. For many scientists, we’ve already begun the sixth mass extinction event in the history of Earth. It’s calculated that, at the present rhythm, the current extinction of species is between 100 to 1,000 times greater that natural, a situation that’s increasing due to climate change because its effects worsen already existing threats and give rise to new ones.

Even though Spain is one of the richest countries in Europe in terms of biodiversity, the percentage of species at risk is very high: 34% of all amphibians, 54% of all continental fishes, or 15% of all vascular flowers, for example. The survival of a multitude of species will depend on what we do in the next few years. We only have one planet and protecting it is everyone’s responsibility!