The Energy Efficiency and Climate (ECC) Awards are the highlight of Telefónica's annual Energy and Climate Change Workshop, an event at which the company reviews with technology...

The Energy Efficiency and Climate (ECC) Awards are the highlight of Telefónica’s annual Energy and Climate Change Workshop, an event at which the company reviews with technology providers the advances and objectives for tackling the climate emergency. They are awards that set us examples of how a telecommunications company can reduce its carbon footprint and lead green digitalization:

– Best Energy Efficiency project: Battery as a Service. This is an initiative of Telefónica Colombia to use batteries as another service, instead of buying them, thus reducing maintenance costs and diesel consumption by 70% (almost 500,000 litres, which means savings of over 1,300 tonnes of CO2 per year). In addition, the company is evaluating its implementation in other countries where Telefónica Hispam operates.

– Best Environmental Project: Carbon Neutral, Telefónica Brazil’s initiative with which it has offset 100% of its direct CO2emissions. Part of this achievement is due to the use of fully renewable energy, allowing a 50% reduction in its emissions by 2019, and the purchase of carbon credits to offset the direct emissions inherent to its operation through the REDD+ Jari project, which promotes the sustainable management of forest resources, the well-being and empowerment of communities in the Brazilian Amazon rainforest, and the VTRM Renewable Energy project that contributes to the generation of wind power in the north-east region of the country. 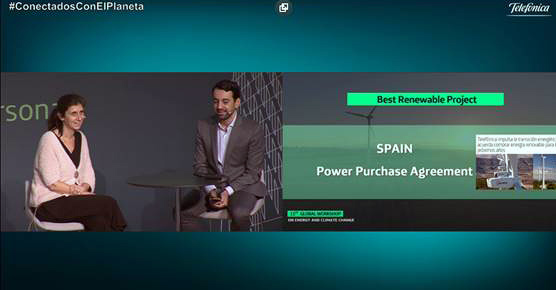 – Best Renewable Project:  Telefónica España’s long-term renewable energy purchase agreement with Acciona. Supply of 100 GWh per year of clean energy during 10 years and with traceability through blockchain, which enables one to prove the renewable origin of the energy produced in real time and in a transparent way. This project allows the company to go beyond the purchase of guarantees of renewable origin, reducing the cost of energy but also encourages the “additional” generation of renewable energy in Spain since the energy will be supplied by a newly-built farm.

And because there are always talented, committed employees behind the initiatives, the Energy Efficiency and Climate

– Manager: Joachin Sandt, Head of Environment at Telefónica Germany, for promoting the company’s environmental commitment. His leadership is outstanding in achieving important advances in key areas such as the commitment to zero net emissions in 2025 and waste management, making the environment more strategic every day.