Thinking about all this, Telefónica is digitizing the waste management in Europe and Latin America, more than 23,000 tonnes in 2016, 12% less. How? Thanks to a tool called GReTel (Waste Management of Telefónica).

Humanity generates 1 trillion tons of waste annually. Switzerland is the country that recycles the most, 52%. And the garbage is increasing. The one that worries the most is perhaps the electronics (e-waste): about 42 million tons per year, of which only 17% go to recycling. If all the materials were recovered from the e-waste, it could gather 52 billion, and, more importantly, environmental pollution and health risks would be avoided. Circular economics addresses this problem.

Thinking about all this, Telefónica is digitizing the waste management in Europe and Latin America, more than 23,000 tonnes in 2016, 12% less. How? Thanks to a tool called GReTel (Waste Management of Telefónica) and developed by the Galician start-up Teimas Desenvolvemento, the only Spanish company specialized in the development of technologies for the waste management sector. 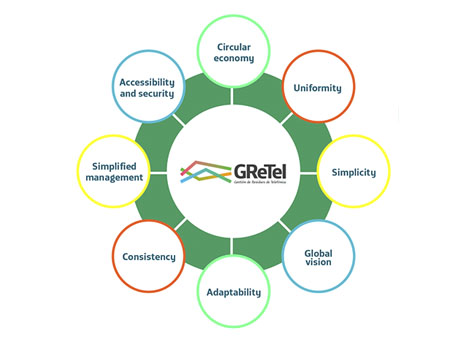 What does Telefónica’s Sustainability management look for with GReTel? Reduce even more its environmental impact through plans to minimize waste generation, recycling and internal reuse of mainly electrical and electronic equipment. In this way, Telefónica is one step closer to its green growth strategy, aligning with the proposals that – especially from the EU – call for companies and governments to move towards a circular economy model. This tool generates the necessary information to achieve this.

The new platform has already been launched in Spain and Colombia, and this year began its implementation in the other 15 countries in which Telefónica has presence. The deployment together with their respective plans of communication and internal training.

Telefónica  has an Environmental Policy that applies to all companies linked to the Group and that sets the lines to follow to reduce the environmental impacts that generate in its facilities for the provision of its services. Thanks to the platform developed by Teimas, it will have a registry of all the waste generated in all its work centers, regardless of the country in which it is located and the activity they develop- offices, base stations, R & D centers …-, which will allow to generate useful information such as measurements, ratios of reuse, valuation and recycling of waste, etc.

GReTel is the design and implementation of a web-based Waste Management System, whose objective is to increase the value of the waste managed by digitizing the process, as well as minimizing the associated risks.

Of the 23,000 tons of garbage generated by Telefónica, 5,247 tons are used electronic waste and used equipment, both by the company and its customers

This objective is reflected in the increase on the income from the sale of waste, the reduction of risks of legal non-compliance in waste, which is increasingly more demanding in the countries where Telefónica operates (Producer’s Extended Responsibility), efficiency waste management processes and reduction of environmental pollution.

The type of waste of Telefónica

Particular mention to the electrical waste and electronic equipment (WEEE), the largest waste flow in the world in the last years, result of an increasingly technological society. Last year, Telefónica managed 5,247 tons of electronic waste and used equipment, generated both by the company itself and by its customers. Of the total, 27% were reused and 69% recycled to extract and reuse their components -electronic waste contain valuable metals such as gold, silver or copper-. Only 4%, mainly non-recoverable materials, went to landfill or incineration. The increase of the reuse is one of the main objectives that are pursued.

Other waste streams were paper and paperboard, with 1,182 tonnes – electronic billing has allowed Telefónica to avoid the use of 3,500 tonnes of paper, which involves the cutting of 60,000 trees- or certain dangerous waste such as batteries, eventhough they are generated in less quantity, they require a strict control in terms of its management and treatment due to its potential impact on the environment.

The electronic billing allows Telefónica to avoid the use of 3,500 tons of paper, which involves the cutting of 60,000 trees

These figures give an idea of the importance of keeping a precise record of the generation of waste within the group, as well as of its final destination, in order to develop a strategy based on the principles of circular economy and environmental sustainability.

On the other hand, the GReTel tool, available through the internet and from any device connected to the network, will facilitate Telefónica to comply with the various environmental regulations – especially complex in the area of waste – in the different countries of Europe and Latin America in Which operates.