The Digital Manifesto is born in a collaborative spirit to address the main challenges of the digital world. Last week we launched our proposal in Espacio Fundación Telefónica.   ... 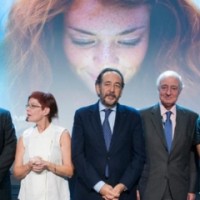 The Digital Manifesto is born in a collaborative spirit to address the main challenges of the digital world. Last week we launched our proposal in Espacio Fundación Telefónica.

Carlos López Blanco, Global Head, Public and Regulatory Affairs of Telefónica, was the keynote of the event. He highlighted the main proposals of our Digital Manifesto: the 10 point recommendations. Anyhow, our main goal is to guarantee an open and safer Internet experience to our users.

What are the main challenges we face? We summarize them in three headlines:

First of all, people should have access to the Internet, because today there are still 2/3 of the population without access to the Internet. Telefonica in this regard has invested 9,400 million euros in 2013, increasing its investments on fiber by 50%, on 3G and 4G by 38%, and also on TV.

Secondly, as Carlos López Blanco underlined, the Internet needs to be Open because people want an Open Internet experience and to have control over their digital life. In other words, we support interoperatibility of Internet services and a portable digital life.

And finally, we need to build up Digital Confidence. This has to do with more transparency, more privacy and more security. 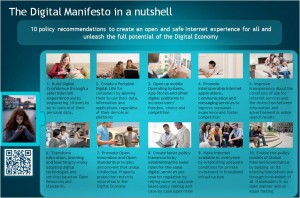 The new restrictions and bottlenecks in the Internet are negatively impacting on the user’s experience. Policy makers and regulators must understand this new scenario as well as the new realities in the light of technological innovation and the digitalization of society. On the other hand, this fast moving market is changing the traditional understanding on competitive law. It is urgent to apply a very simple principle: Same services, same rules.

This rule will be the best guarantee of a level playing field and a flourishing digital economy. 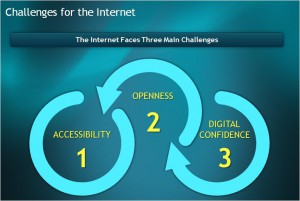 Micthell Baker recalled the benefits of “an open and interoperable web” in which Mozilla has been focused for years. A good example of this is Mozilla’s high bet on Firefox OS. Michael Kende, in his part, believes that an open Internet is a great opportunity for entrepreneurs around the world. Meanwhile, Chema Alonso focused on security, which is getting more and more critical for users. He advocated for standards on security to enhance an open and safe experience of users. But, for this to happen we must continue innovating. Carlos Barrabés, a pioneer in e-commerce, said that looking towards the future, policy makers should design policies and approve regulation that facilitates innovation and ensures a level playing field among players. 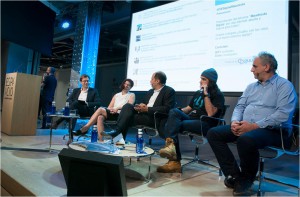