My World. More than 7 million voices have already spoken!

My World was born with the aim of developing the “most inclusive” agenda. Through it, United Nations has given citizens the voice so the future global agenda for development...

My World was born with the aim of developing the “most inclusive” agenda. Through it, United Nations has given citizens the voice so the future global agenda for development post2015 is created from an open and consultative process.

More than 7 million people have already formed part of an unprecedented process. Their votes represent the hopes and dreams of thousands of people to ensure that we all have a better life quality. The profile of the participants, in terms of gender, has been very equal, with 51% of men compared to 49% of women. Most of them are aged between 16 and 30 years (58%).

Quality education is, by far, the most voted proposal by the citizens, followed by a better health, better job opportunities and an honest and responsible government. In addition, some of the topics that the participants have in mind are those related to equity, such as discrimination or inequality by gender. 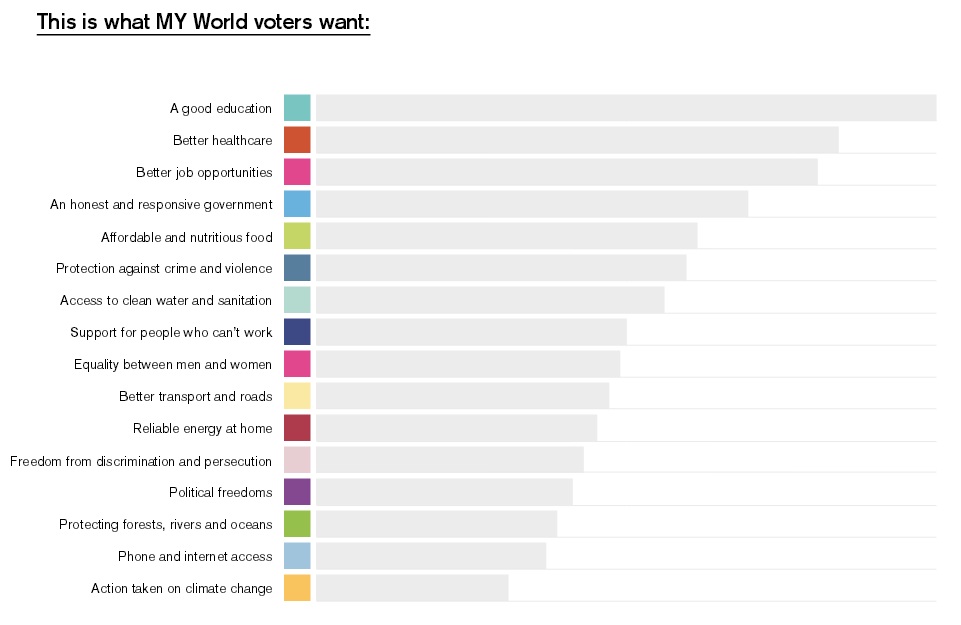 With a majority of support, a quality education is the main concern of the citizens, regardless of the group to which they belong, their educational level, gender or origin country. The only exception is the people of more than 61 years, who have health as a priority. All this, demonstrates that if the Millennium Development Goals have helped 9 of every 10 children to have access to the primary school, now the quality of education becomes a priority at the global level.

“Education enables you to dream, and is the only thing they cannot take away from you, because it is completely in your mind”.

Like education, better health is constantly among the main concerns of the majority of the demographic groups that have participated in My World. However, especially the larger collectives with lower educational level highlighted health as their main concern.

Closing the top 3 priorities is an improvement in job opportunities. This case is highlighted by the homogeneity of the voters, the majority being young people, which makes it clear the relevance that are taking the prospects for future employment.

New technologies have played an important role in the vote of My World. Despite the fact that the majority participated through a traditional ballot, mobile technologies have enabled the people from difficult access communities to be part of the project. At least 500,000 votes have been received via mobile phones, of which 70% were men. The process has evidenced that the ICT provide us with a new tool to effectively vote and also underlines the potential of the same for a collection of transparent data.

Approximately one out of every thousand people has expressed their views through My World. Their responses take the main stage in the next steps to ensure that the global agenda for development post2015 is a reality of which we all take part.

You can view the full report here: http://ow.ly/GgBSS