Millennials are optimistic, focused on their careers, and ready to take control of their own future

A survey by Telefónica of more than 6,700 Millennials across Latin America, the United States and Western Europe found that today’s 18-30 year-olds – the... 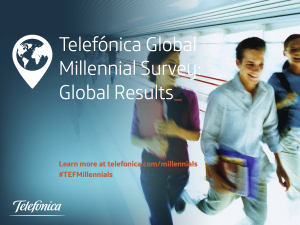 A survey by Telefónica of more than 6,700 Millennials across Latin America, the United States and Western Europe found that today’s 18-30 year-olds – the Millennial generation – are largely satisfied with their lives and decidedly optimistic about their prospects for the future. Nowhere is that optimism more evident than in Latin America.

The survey, which follows on from Telefónica’s inaugural Global Millennial Survey in 2013, have exceptionally high hopes for their own future and their country’s future.

Neelie Kroes, vice president of the European Commission, said, “This year’s Global Millennial Survey findings are clear: our young people want stable, well-paying jobs; as well as the opportunity to create their own businesses – and it’s our job in the EU to help them get there! The survey shows us that one of the most important issues on young people’s minds is getting a good education – and that means equipping them with the digital skills they will need to get the best jobs going forward. The Commission’s Opening Up Education initiative is a good starting point, but we have lots more to do. I applaud Telefónica for undertaking this survey and for their Open Future platform – we need more action like this in Europe. Come on! It’s a call to action!”

Millennials are aware of and concerned about the world around them and consider poverty (44%), corruption (36%), the economy (26%) and education (26%) the most important issues the world faces today. Corruption (56%) and the education system (42%) are cited as the primary hindrances to domestic growth by global Millennials.

Millennials feel that they are able to have a positive impact on the world, with almost two-thirds (65%) saying they believe they can make a local difference, and 40% saying they can make a global difference. When it comes to making a difference in their communities, 38% of respondents say they would consider learning about ways to help, and 37% say they would consider donating their time as well as mentor or teach to make a difference.

MILLENNIALS TAKE THEIR TECHNOLOGY AND THEIR CAREERS VERY SERIOUSLY

One thing Millennials everywhere have in common is their ubiquitous use of mobile technology: 80% own a smartphone, as compared to 72% of respondents from the same countries in the 2013 survey results, and 45% own a tablet, as compared to 28% last year.

A large majority (83%) say they are on the cutting edge of technology, and most believe that having a digital skillset can enhance their job performance and career.  Almost three-quarters (73%) believe a top benefit of having digital skills is improving the quality of their work, and 42% believe it helps them finish their work faster. An education in a technology-related field is also valuable, as demonstrated by the fact that 15% of global Millennials believe studying computer science and programming is most important for ensuring personal future success – more than any other field of study.

Education is a deep concern for many Millennials: 60% believe improving the education system should be one of their government’s top infrastructure priorities and they are eager for improvements to be made in the quality of curriculum (59%), quality of teachers (59%), affordability (48%), access to technology (46%) and access to education for all (45%).

Latin American Millennials are much less satisfied with their education systems (42%) – even in countries seen as regional leaders – than their counterparts in Western Europe (58%) and the United States (59%).

“We will continue to demonstrate our commitment to the future of young people through Open Future – Telefónica’s platform for open innovation that brings together all the initiatives related to entrepreneurship and that supports entrepreneurs form the initial phases of developing their ideas, all the way to their market launch”, said José María Álvarez-Pallete, chief operating officer, Telefónica S.A.

WHAT MILLENNIALS WANT OUT OF LIFE, A JOB, AN EMPLOYER AND THEIR CAREERS

According to the survey, Millennials are focused on their jobs and careers: they ranked “having a stable, well-paying job” as the personal goal they most hoped to achieve over the next 10 years (43%), far above all other choices, including owning a home (16%), having children (10%) and getting married (9%).

Most Millennials (71%) are interested in looking beyond their country’s borders for the right job, and that number increases to 81% in Latin America.

More than a third (39%) of Latin American Millennials are most interested in working for a company that offers training and development opportunities, compared to only 20% of U.S. Millennial

For more information, visit http://www.telefonica.com/millennials or start the conversation on Twitter with #TEFMillennials