The Internet Governance Forum in Spain, promoted by United Nations, brings together international experts from business, public administration and civil society to analyze the keys to regulating the digital ecosystem. 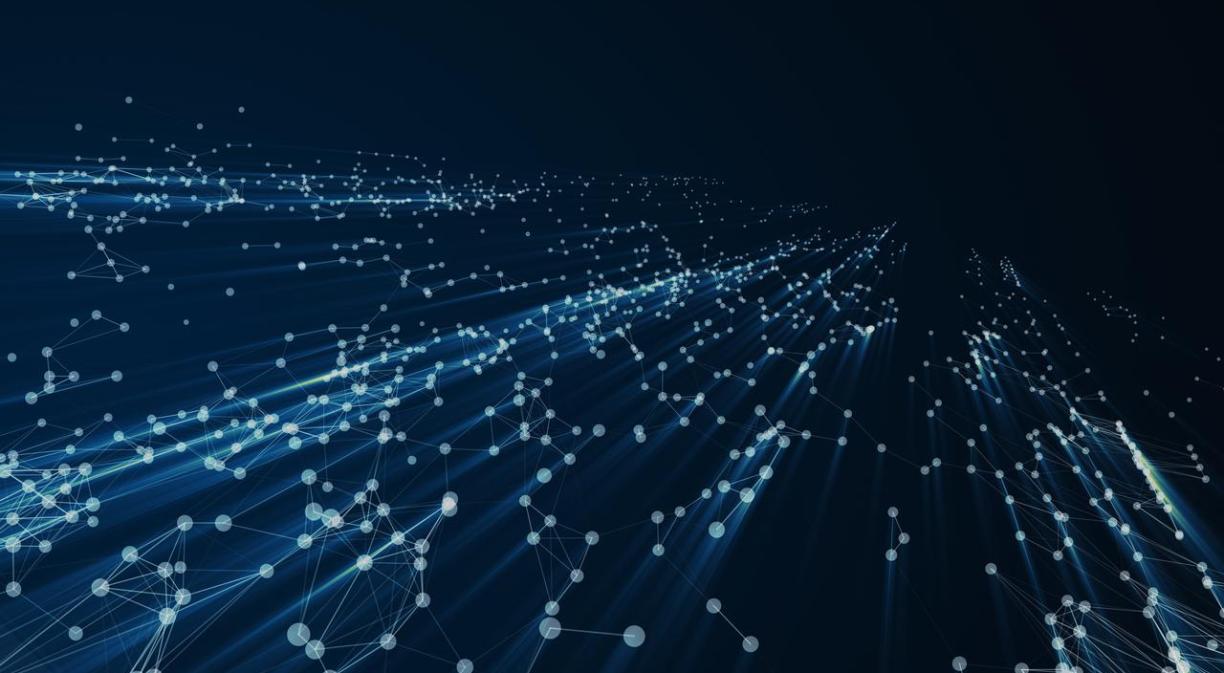 The second half of November has started with the celebration of the Internet Governance Forum in Spain (IGF Spain) under the slogan “Internet unites us”. Jorge Pérez, director and organizer of the event, opened the eleventh edition of the Forum by summarizing the main theme of the conference: the regulatory debate at the European level on the network as the engine of transformation, recovery and sustainability.

Carme Artigas, Secretary of State for Digitalization and Artificial Intelligence, opened the presentations by focusing on the importance of “digital as a transforming element in the social sphere”. In her opinion, digitalization offers us a great potential to move towards “a more egalitarian, inclusive and sustainable model that understands technological progress as a containment dike against social exclusion and capable of reducing inequalities”. 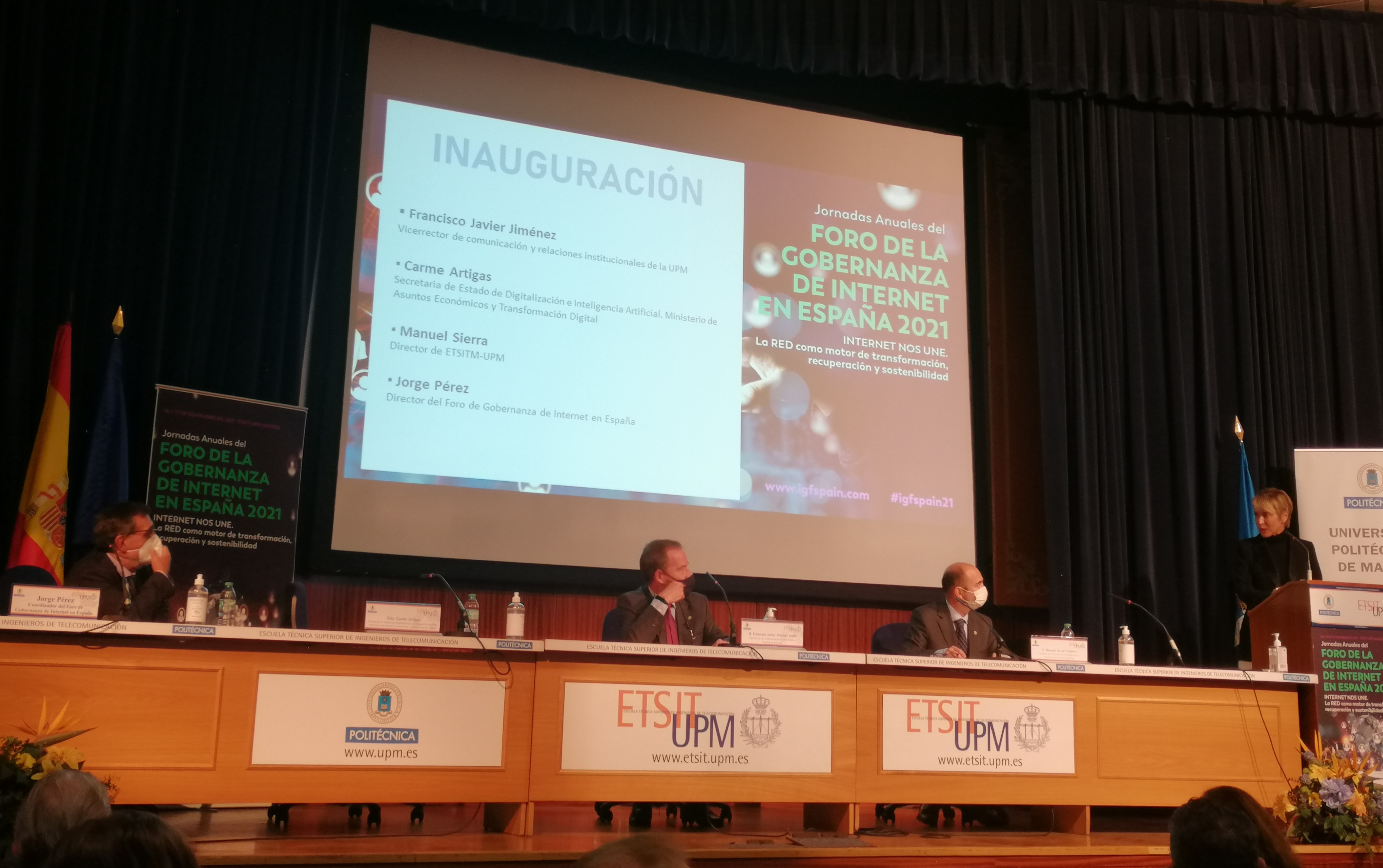 This approach was also present at the round table of the Forum sponsors, with Miguel Escassi (Director of Public Policy and Institutional Relations at Google Spain), David Sola (Director of Public Policy, Regulation and EU Funds at Vodafone Spain), Nani Fernández (Director of Institutional Relations at Orange) and Pablo Gonzalo (Head of Knowledge and Culture at Fundación Telefónica). The panel highlighted that telecommunications operators are particularly useful strategic allies in bridging digital divides related to internet access (connectivity) and digital skills training (digital education). Telefónica stands out in both fields with pioneering initiatives in the sector, such as Internet para Todos to promote access to the network or Campus 42 to foster digital talent.

The European Union has set out to regulate digital technology and services to achieve a secure and trustworthy ecosystem for users and businesses. With this premise, it has launched several legislative proposals aimed at establishing a horizontal framework for action, including the Digital Services Act (DSA) and the Digital Markets Act (DMA). Several experts exchanged views on how negotiations on the two European proposals should progress.

The Digital Services Act is the initiative aimed at updating the 2000 E-Commerce Directive to ensure a safe online space where there is no place for illegal content, products or services. To this end, the panel agreed on the need to adapt the resulting regulatory framework to the profound evolution that the digital ecosystem has undergone in the last two decades.

However, Rafael Pérez (deputy director general for the Digital Society of the Ministry of Economic Affairs and Digital Transformation) warned that it is necessary to maintain three key principles of the original directive: the maintenance of the country of origin principle, non-monitorization of the network and the exemption from liability for intermediaries who do not have real knowledge of what is happening in their services. Mónica Sánchez (head of Competition Policy, Telefónica) supported this statement and added that it is essential to complete these principles with asymmetric obligations proportional to the capacity, size and impact of intermediaries on the European economy and society. In this line, the Telefónica representative highlighted the need to achieve a more effective and stable cooperation for the national implementation of the Regulation, through the work of the so-called “Digital Services Coordinators” and the European Commission. Another relevant point of debate was the rejection of the ban on personalized advertising.

Carlos Mateo (spokesman for the Spanish Startups Association) confirms that this move would endanger the survival of start-ups that manage to be competitive thanks to marketing strategies based on this type of advertising. 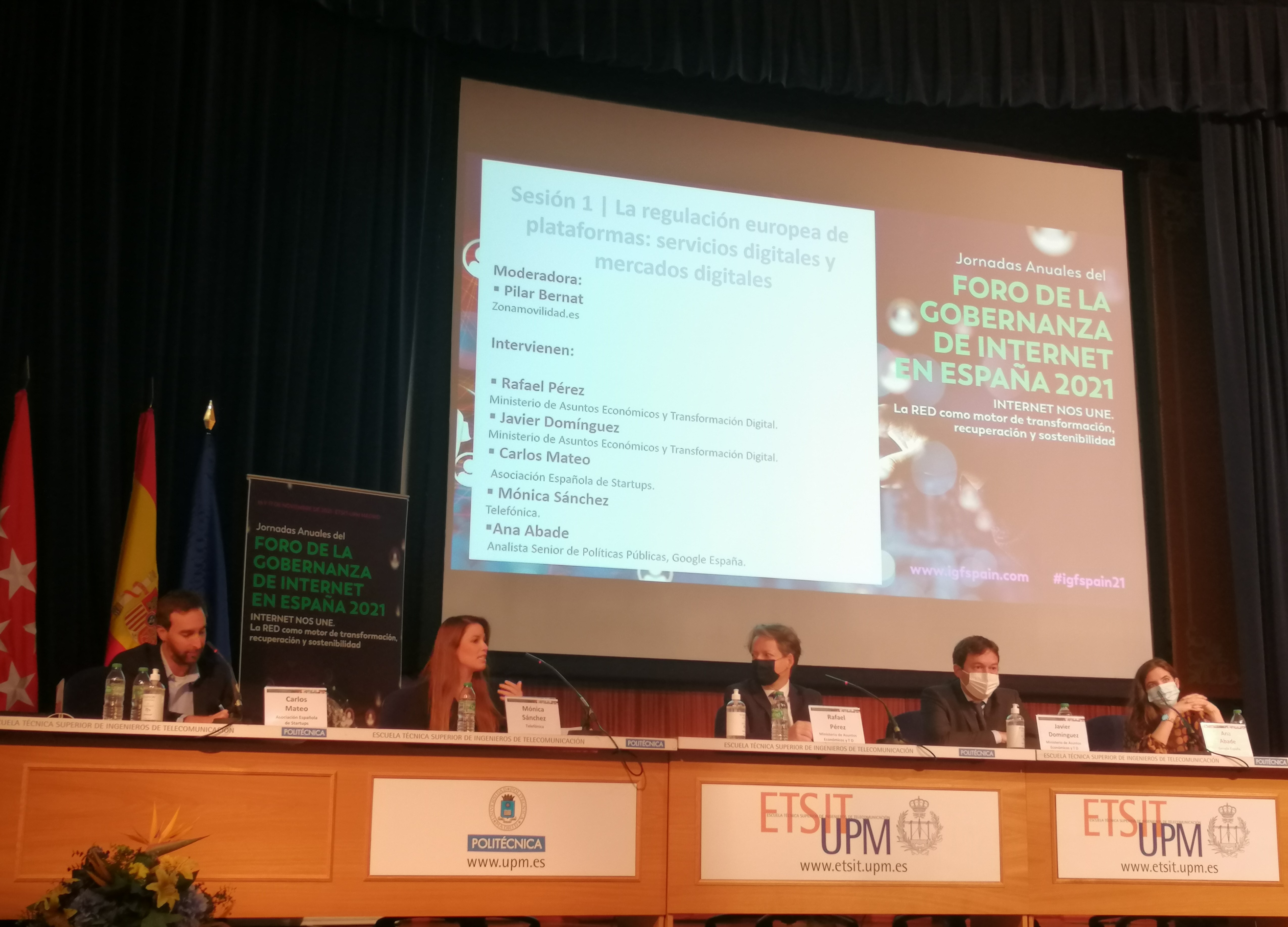 On the other hand, the Digital Markets Act establishes a series of criteria for large systemic online platforms that act as gatekeepers. In the words of Javier Domínguez (advisory member of the Sub directorate General for Better Regulation, Business Support and Competition), the DMA is a “necessary framework based on an ex ante approach” that arises as a result of “the slowness of the classic competition instruments”. Adriana Maldonado (PSOE MEP) expanded on this idea by confessing that the regulation on technology platforms so far “is not enough” and we are playing both the competitiveness of European SMEs and start-ups and “the image of the EU” with this initiative that will make us “pioneers in the world”. This more geopolitical vision was also perceived in the interventions of Pablo Arias (PP MEP): “We have been accused of being anti-American, but nothing could be further from the truth. Any company is welcome as long as it complies with our standards, values and lifestyle”.

In addition to the scope of the standard, one of the most debated questions about the DMA at the moment is how to ensure good compliance with it. In this regard, Monica Sanchez provided some solutions. The first is to focus exclusively on those digital platforms that are really creating structural market problems, and the second is to strengthen the governance structure of the DMA with closer collaboration between national regulatory authorities and the Commission. For her part, Ana Abade (Senior Public Policy Analyst, Google Spain) indicated that more guidance will be needed for platforms to comply with the obligations that will arise in order to create a legislative framework that guarantees legal certainty. Other participants, such as Hendrik Bourgeois (head of Government Affairs Europe and Russia at Apple) and Ofelia Tejerina (president of the Asociación de Internautas), called for more flexibility in the regulatory proposal.

With regard to digital trust, the panel on Artificial Intelligence and digital identity was particularly noteworthy. Richard Benjamins (chief AI & Data Strategist at Telefónica), analyzed the new proposal to regulate Artificial Intelligence from the European Commission, which takes a risk-based approach. This is embodied in legislation that imposes different obligations depending on the impact of each specific AI use case. Idoia Salazar (president of OdiseIA) stressed that this regulatory model is not static but will have to be updated as new use cases multiply and should be complemented by self-regulatory proposals. Finally, Nacho Alamillo (CEO of Astrea La Infopista Jurídica) focused on the urgency of addressing in depth the interaction of digital identity with artificial intelligence, especially through the expected eIDAS 2 Regulation proposal. 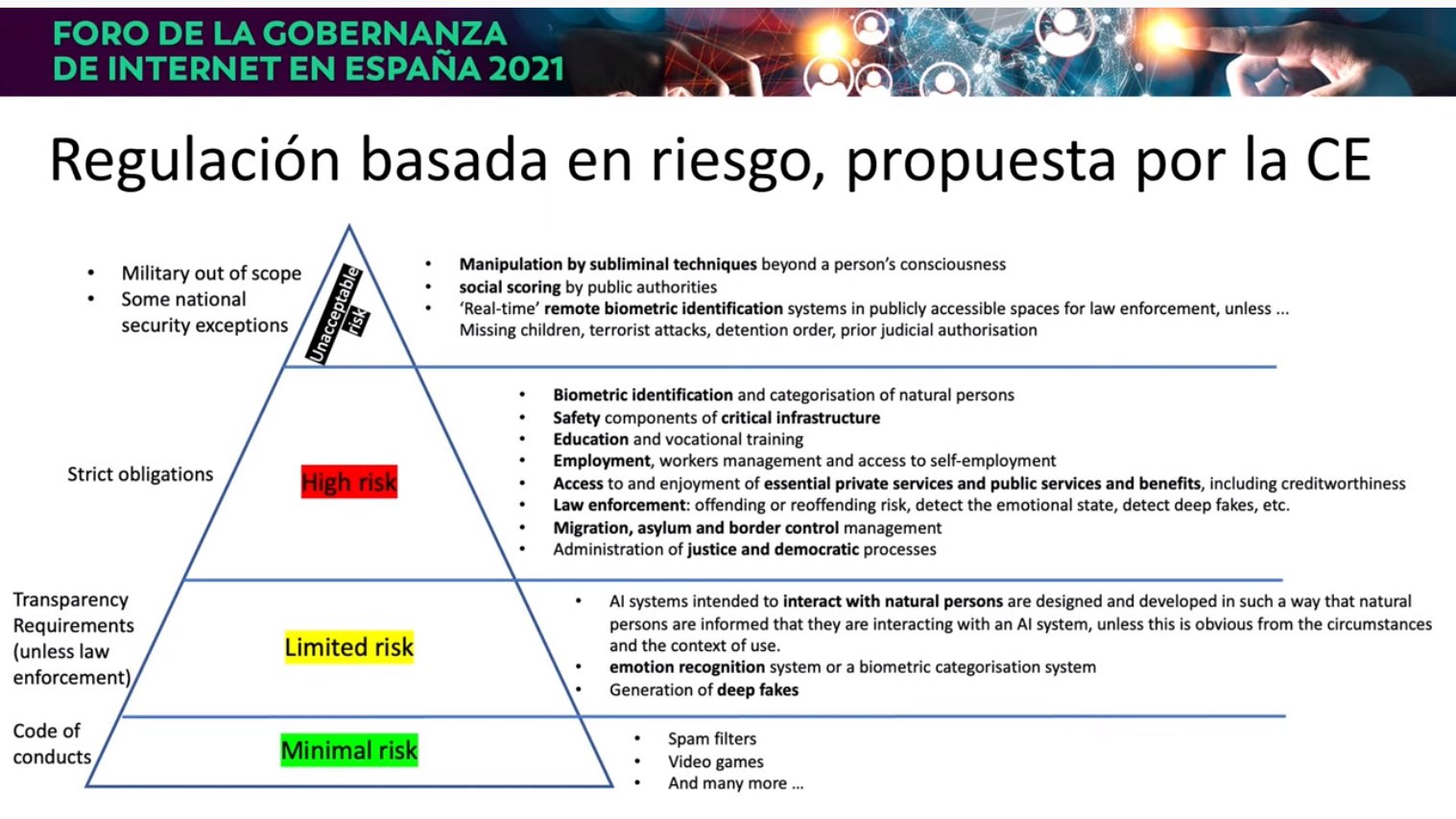 This traction and commitment to regulate the digital impulse makes sense when it is imbricated with another trend: the green transition. As Eva del Hoyo (Director General for Sustainability at the Ministry of Foreign Affairs, European Union and Cooperation) explains, the digital transition is the vehicle for achieving environmental objectives and, at this point, the role of telecommunications operators becomes particularly important. 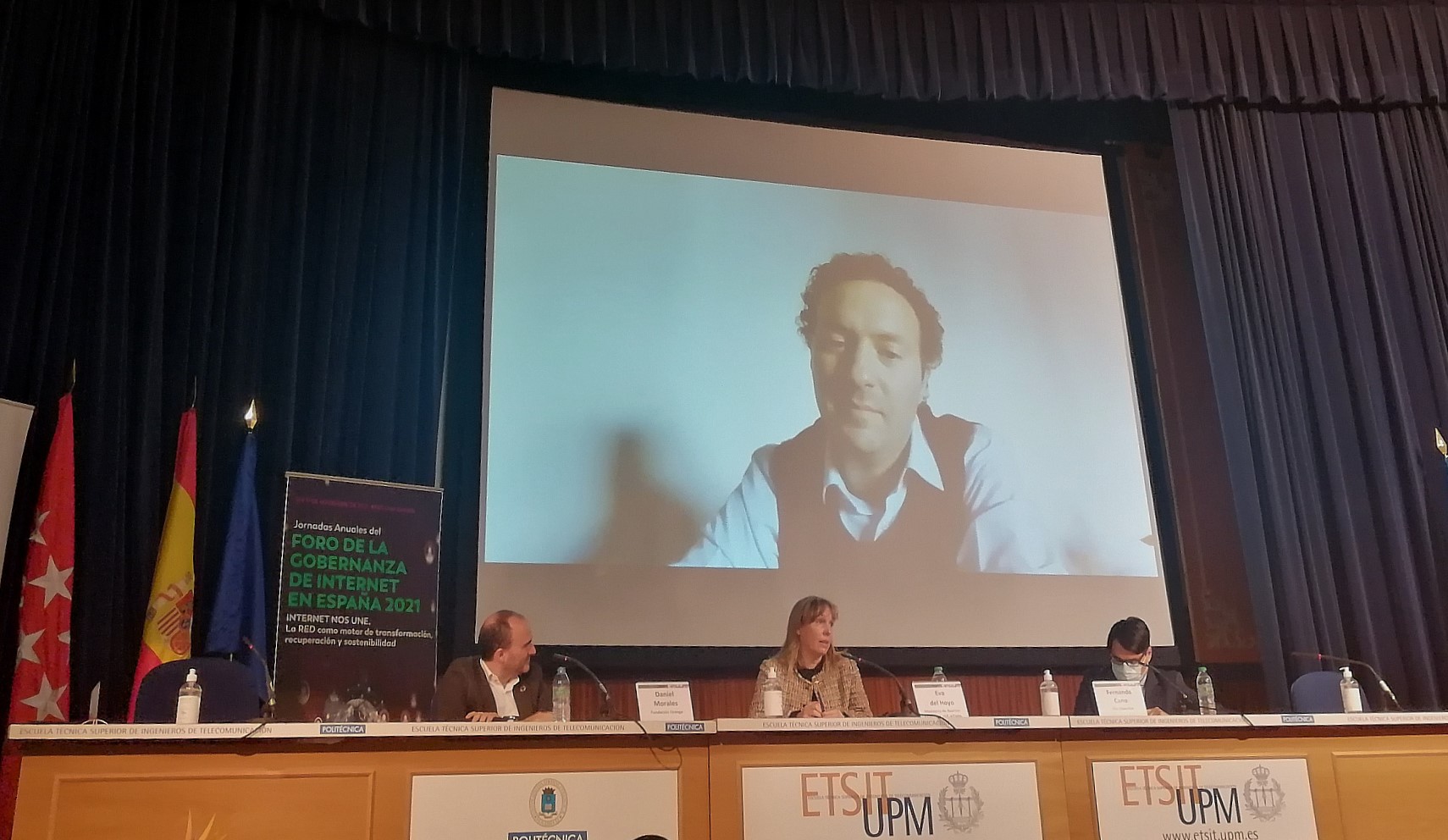 On the screen: Pablo Barrionuevo. On the panel, from left to right:: Daniel Morales, Eva del Hoyo and Fernando Cano.

Pablo Barrionuevo (Head of Public Policy and Internet, Telefónica) confirmed this view and added that “the telco sector is not part of the problem, but it is part of the solution, and we are talking about digitalization”. An important step in this direction is the consideration of environmental objectives as part of the business objectives themselves, said the Telefónica representative. However, the effort cannot be unilateral and collaborative solutions between the public and private sectors are required. This mantra was also repeated in other Forum sessions dedicated to the digital divide, data governance or digital rights.

The eleventh edition of the Internet Governance Forum in Spain has been a very useful space for reflection and debate to contribute to the design of the rules that will govern the Internet of the future. The conclusions of the conversations will cross national borders and will be taken to the next Global Internet Governance Forum (IGF), sponsored by the United Nations, which will bring together representatives from different countries and institutions between December 6 and 10, in Katowice, Poland.