As announced in a previous post , the 3rd Annual Meeting of IGF Spain was held last Thursday 24th of May at the School of Telecommunications Engineering of the Polytechnic University of... 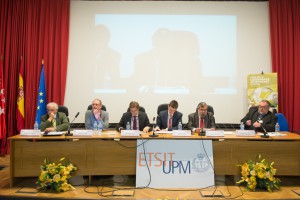 As announced in a previous post, the 3rd Annual Meeting of IGF Spain was held last Thursday 24th of May at the School of Telecommunications Engineering of the Polytechnic University of Madrid (UPM).

IGF-Spain is the national debate forum about Internet Governance in Spain, where all stakeholders interested in developing the Internet participate on an equal footing with the objective of sharing views and ideas on how each interested party could help in achieving the common objective of having a better Internet for all.

In the opening session, chaired by the Spanish Secretary of State for Telecommunications and Information Society, Mr. Víctor Calvo-Sotelo  emphasized the importance of the message we can extract from the failure of last WCIT in Dubai. In his opinion this failure is a consequence of the maturity of Internet. The economic and political importance of the Internet, a real prove of its success story, has moved the debate from pure technical and commercial issues to the geo-political scene, where the confrontations between developing and developed countries invade all fora where they interact. The clash between the two visions, one based on freedom (access, speech, privacy, …) the other based on control (identification, security, …) divided the countries into two groups with the result of a large number of them not signing the ITRs. Mr Calvo-Sotelo also underlined the need for a stronger European voice in the Internet Governance debate as well as the urgency to reach a real single European digital market if Europe wants to compete in the global arena.

This year’s Annual Meeting was organized around six sessions:

As during the opening session, all speakers explained the failure at Dubai as a consequence of the Internet success story and its enormous political and economic dimension. This fact is increasingly perceived by all actors, and governments are more and more reluctant to let the Internet development only in hands of informal structures. The way to structure the Internet governance is the base for political confrontations between two blocks of countries.

According to Mr Corro, whatever governance model will be adopted, it will have to be useful, balanced and possible to be operative. The present informal governance mechanisms must evolve or will fail. We have to centre our actions into smaller groups and with more direct and clear messages. Negotiations between large number of actors do not produce the timely decisions needed for the Internet world.

Both Mr Domingo and Mr Dávara underlined the importance of the musltistakeholder nature of the Internet governance. For them, transparency, protection of fundamental rights and neutrality must be the cornerstone to be preserved in any future development.

For Mr Steck, the multistakeholder model of the Internet governance has been the main reason of its success and not only should be preserved, but also promoted as model for other sectors. The classic model based only on governmental action is in crisis and the failure of the last WCIT is a good example. Any future evolution of the Internet governance model should have as main objective the connection of the still unconnected. To this aim we need an open, innovative and sustainable model which allows freedom in the broad sense: from a human right perspective to the freedom of election or the freedom to develop innovative business models.

All the speakers emphasized the need for a deeper debate and engagement of the Spanish society in the field of Internet Governance.

The Privacy session was of great relevance as the on-going reform process within the European Union has unleashed an intense debate around fundamental issues for the protection of European citizens’ rights and the development of businesses in the Digital Era.

After two hours of debate the main conclusions were:

For more information on the IGF-Spain sessions click here.