First Annual Conference of the Internet Governance Forum Spain: “For an open Internet, safe and sustainable”.

On 12th May the IGF Spain ´s annual conference took place in Madrid. This event is the main platform for debate among all stakeholders on Internet Governance in Spain and provides a way for... 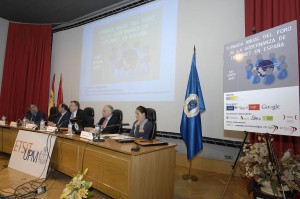 On 12th May the IGF Spain´s annual conference took place in Madrid. This event is the main platform for debate among all stakeholders on Internet Governance in Spain and provides a way for all interested parties to exchange views. This year it focused on public policy issues in relation to the sustainability and robustness of the Internet.

Nearly fifty panellists discussed in various debates and always interactive with the rest of the audience some of the present challenges regarding the future of the Internet, to just name a few

The program was divided into nine sessions to discuss and as far as possible also reach conclusions to propose the rules and governance of the Internet in each issue. All findings will be included by the IGF Spain in a document and will be distributed at national and international level.

However, some ideas can already be outlined here:

Overall the conference had some very rich and interesting debates and created much “food for thought”!

Our thanks go to all organisers, especially Prof. Jorge Perez and his team from the “Escuela Tecnica Superior de Ingenieros de Telecomunicaciones de Madrid”, but also to all sponsors, including the Telefónica Foundation.