Decoding the present to design the future

We analyse the tools capable of managing the present and advancing towards a better future in the 4th edition of the Ibero-American Public Leadership Programme.

The Carolina Foundation, Telefónica and BBVA have just concluded the 4th edition of the Ibero-American Public Leadership Programme, a long-awaited event that finally took place virtually between October 27th and November 10th. The main objective of this initiative, which began in 2016, is to bring together public leaders to exchange knowledge and experiences, improve the quality and effectiveness of public policies and, in general, support institutional strengthening in Iberoamerica. 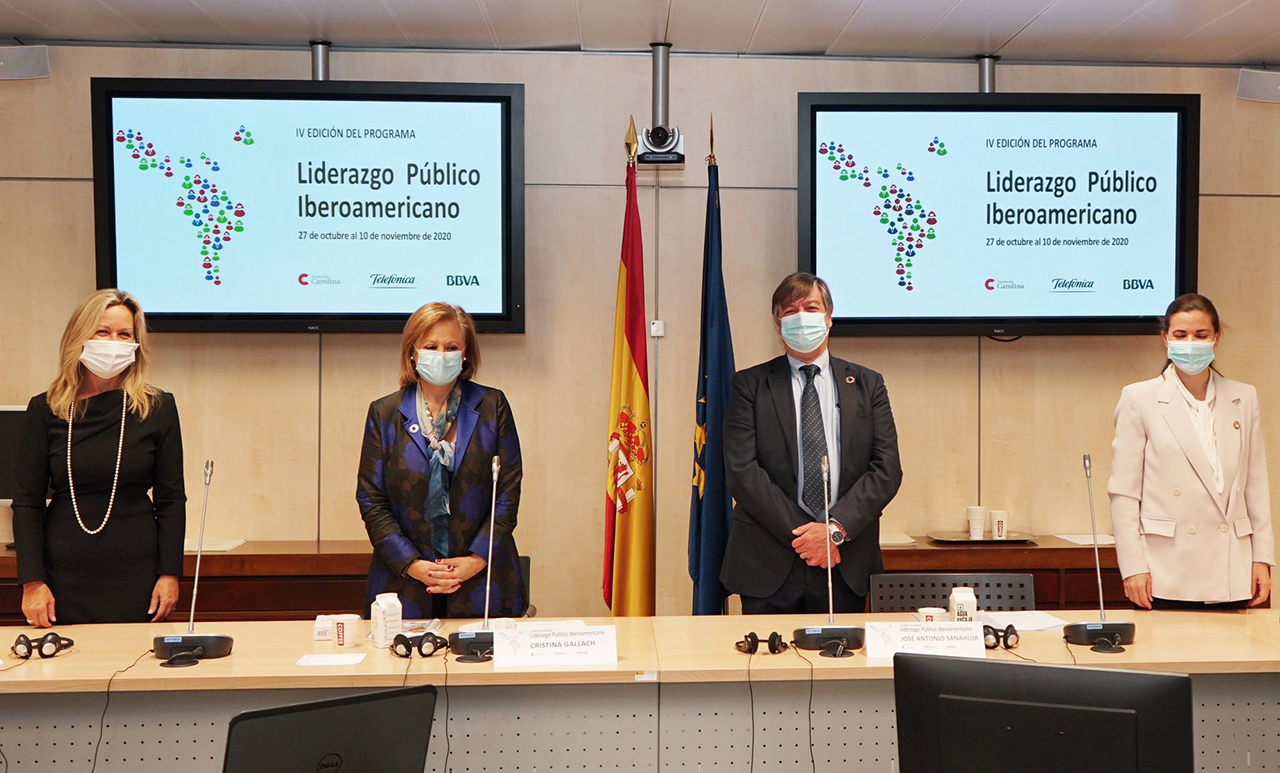 Opening session of the 4th edition of the Ibero-American Public Leadership Programme. From left to right: Trinidad Jiménez (Director of Global Strategy for Public Affairs at Telefónica), Cristina Gallach (Secretary of State for Foreign Affairs and for Latin America and the Caribbean), José Antonio Sanahuja (Director of the Carolina Foundation) and María Abascal (Director of Public Affairs Strategy at BBVA).

In particular, the 2019/2020 edition, under the slogan “Decoding the present to design the future”, has been dedicated to the debate on the opportunities and challenges for the governance of public affairs in such a turbulent social and economic context as the present, as well as to the analysis of the tools capable of managing the present and advancing towards a better future.

In this respect, the opening session highlighted the importance of public-private collaboration in tackling existing challenges, with interventions by Cristina Gallach (Secretary of State for Foreign Affairs and for Iberoamerica and the Caribbean), Trinidad Jiménez (Director of Global Strategy for Public Affairs at Telefónica), María Abascal (Director of Public Affairs Strategy at BBVA) and José Antonio Sanahuja (Director of the Carolina Foundation).

“We need, more than ever, a Digital Deal to manage the digital transition by putting people at the centre. This Digital Deal implies a new dialogue between governments, societies and the business community”, Trinidad Jiménez.

This spirit of cooperation was maintained in the five virtual meetings that made up the programme with a focus on the following themes:

In the first of the sessions, Daniel Innerarity (Professor of Political Philosophy at the University of the Basque Country) highlighted the importance of thinking about a new “transtemporal” governance in order to “avoid remaining anchored to a world that has already gone” and to opt for a more strategic approach to the future.

In relation to the promises and challenges of Big Data and the Blockchain, Pablo Kuchovsky (global head of research and patent office at BBVA), Moisés Barrio (lawyer for the Council of State) and Pedro de Alarcón (Head of Big Data for Social Good at Telefónica) reviewed the potential of these technologies to advance social and economic progress in different countries and regions. However, they highlighted the risks associated with unethical uses of these technologies for which we must be prepared.

As far as the reconfiguration of the world of work is concerned, Raúl Olivan (Director General of Open Government and Social Innovation in the Government of Aragon) pointed out the tendency for certain jobs to disappear, while mentioning the opportunity to create new professional profiles that adapt to the new realities. Raúl Rojas (Professor of AI at the Free University of Berlin and member of the Cotec Foundation) warned of the social implications of these changes and of the need to create new schemes for the distribution of the labour market, while Eva Rimbau (researcher and lecturer at the Open University of Catalonia) showed her concern about the possible deepening of the gaps related to worker qualifications.

During the fourth session, Marta Peirano (journalist and researcher), Jorge Resina (Professor of Political Science at the Complutense University of Madrid) and Montserrat García (special advisor to the High Representative and the European Foreign Service on digital communication) discussed the use of social networks and their involvement in phenomena such as misinformation, user privacy and control of the content of certain platforms.

Finally, the speeches of Lorena Boix (Director of Digital Policy Planning and Implementation of the European Commission), Diego Rubio (Director of the National Office for Prospective and Long-term Country Strategy of the Presidency of the Spanish Government) and Manuel Muñiz (Secretary of State for Global Spain) closed the Programme with a focus on the role of technology in socio-economic, geopolitical, digital and environmental resilience.

The Ibero-American Public Leadership Programme ends for this year, but not the collaboration between Fundación Carolina and Telefónica, which is celebrating its two decades. In this sense, we have just launched the Study Aid Programme for an inclusive and sustainable digitalisation. The initiative promotes analysis projects focused on this subject, which produce expert knowledge, useful for the design and implementation of green, inclusive and sustainable strategies in both the private sector and public administrations.

Consult the terms and conditions of the call for proposals on the website and don’t miss this opportunity to participate!