At present, the data does not offer a positive outlook for humanity. It is likely that global warming is increasing temperatures by 1° C, with regard to the pre-industrial era average;...

At present, the data does not offer a positive outlook for humanity. It is likely that global warming is increasing temperatures by 1° C, with regard to the pre-industrial era average; 60 million people, more than the Spanish population, have been displaced, and cyber crime costs the world economy approximately 445 billion dollars, more than the income of Chile. 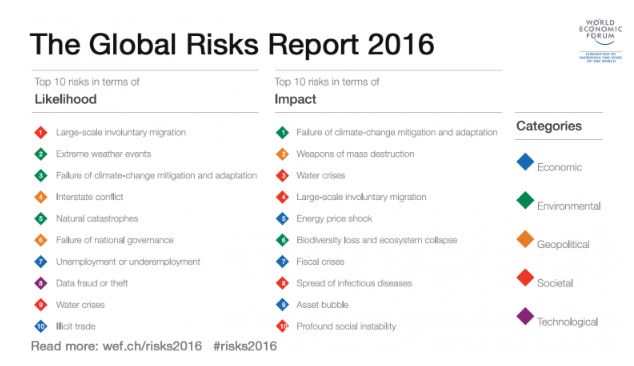 Knowing this, what would you say are the most important global risks? 750 experts have provided their opinions for the Global Risks Report 2016, published by the World Economic Forum with collaboration from Marsh & McLennan Companies and other sponsors, such as Zurich.

According to the study, the top five risks in terms of likelihood are: large-scale involuntary migration, extreme weather events, failure of climate-change mitigation and adaptation, interstate conflict with regional consequences, and large-scale natural disasters.

On the other hand, the top five risks in terms of impact are comprised of failure of climate-change mitigation and adaptation, weapons of mass destruction, the water crisis, large-scale involuntary migration, and energy price shock (rise or fall).

The participants were also asked about the interconnections of these risks and what could lead to triggering a chain of risks. Three were decided upon: first, the possibility of climate change exacerbating the water crisis, with impacts that include conflicts and increased forced migration. An effective response would require improved water management in the face of climate change and policies that respond to a growing population and economic development. In second place is the need to deal with the global refugee crisis, placing greater emphasis on policies that can build resilience in addition to responding to immediate crises. Finally, the derivative risks of the inability to properly understand the challenges of the Fourth Industrial Revolution and how this transition will affect countries, economies and people at a time of economic deceleration