Spain has been a pioneer in adopting a Digital Rights Charter to show the way towards equal protection of citizens' rights in the offline and online environment, as Margarethe Vestager commented earlier this summer. 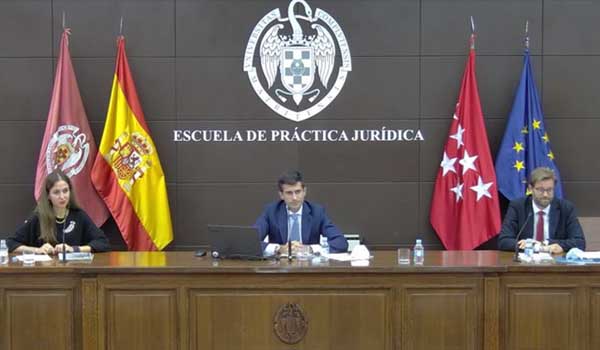 Spain has been a pioneer in adopting a Digital Rights Charter to show the way towards equal protection of citizens’ rights in the offline and online environment, as Margarethe Vestager commented earlier this summer. A fortnight after these words by the Vice-President of the European Commission, Spain approved the aforementioned Charter with important implications for the public and private sectors in the promotion and protection of fundamental rights in the digital era. These implications were the subject of the debate between Leticia López-Lapuente (partner at Uría Menéndez), Christoph Steck (Director of Public Policy and Internet at Telefónica) and Moisés Barrio (Counsel to the Council of State and Professor of Digital Law) at the event “Spain’s Digital Rights Charter: challenges and opportunities for legal advice“, organized by the School of Legal Practice of the Complutense University of Madrid.

While Moisés Barrio focused on the format and scope of the Digital Bill of Rights, Leticia López-Lapuente analyzed the opportunities it offers to practicing lawyers, as summarized by Diario La Ley. For his part, Christoph Steck reviewed the four most relevant aspects for the private sector of this catalog of rights.

Firstly, Steck mentioned the format of the text. The Charter of Digital Rights does not have a normative spirit, but rather a descriptive one: it gathers and describes the most important rights related to the digital environment. In other words, it is not a legally binding text, although it is presented as a guide for future legislative projects and establishes a framework of reference and legal interpretation that is enriching current debates. This aspect is not a weakness, but a strength if we consider that the speed of innovation is not keeping pace with institutional times. This intrinsic characteristic of digitalization is so crucial that normative or regulatory proposals can no longer take the same form as in the past. They therefore need to be based on flexible principles and mechanisms so that they can be updated quickly, and we can avoid their rapid obsolescence. There are already several initiatives in this direction, such as EU Delegated Acts or regulatory sandboxes, which allow start-ups and innovative companies to conduct experiments in a controlled environment under the supervision of a regulator.

Beyond the format, the second aspect to highlight is the Charter’s linkage with other European initiatives. This is the case of the EU’s unanimous support of the Lisbon Declaration, which defines the fundamental agreements and commitments in three main areas: defense of human rights and ethical values, promotion of multilateral and international cooperation and, finally, the importance of green and digital technologies for economic growth. However, it is also related to other specific legislative proposals that include this spirit of protection of specific digital rights in their proposals, such as digital identity (eIDAS Regulation), Artificial Intelligence (AI Act) or the Digital Services Directive.

Thirdly, this movement is very relevant for the promotion and defense of digital rights by private companies. So far, companies were taking it upon themselves to establish digital rights in the digital domain through self-regulation. With the acceleration of digitalization, some companies, such as Telefónica already in 2017, and some public institutions started to make proposals to elaborate a Digital Rights Charter and to cooperate to update those rights by expanding their dimension in the digital realm. From the business side also started to develop a series of ethical principles to design and adopt a responsible technology in line with the values of our societies. An example of this is Telefónica’s Artificial Intelligence principles, which place special emphasis on equality, transparency, clarity, privacy and security in all the markets in which the company operates, also applying to the entire company and extending to its entire value chain, through partners and suppliers. In short, an initiative such as the Digital Rights Charter means that private companies and public institutions begin to accept the rules of the game that move between self-regulation and regulation.

Finally, in this type of initiative, processes also matter. The drafting of the Charter has involved a very open group composed of diverse voices from different sectors. This model, based on what is known as “multistakeholderism”, is an example of how other legislative processes could be opened to stable alliances and coordinated action to jointly address the challenges we face as a society.

For all the above, the road behind us can be summarized as a success story, although the most interesting aspect of this Charter will be its materialization, i.e. how these rights will be translated and promoted in digital public policies.