A telco’s take on sustainability

Telefónica became the first European telecommunications company to issue a green bond, in January 2019, amounting to €1 billion with an oversubscription of five times, which allowed the coupon to close 25 basis points below initial price thoughts.

It decided to do so with a view to financing one of its most important activities: the digital transformation of its network, which is enabling the company to achieve its business and climate goals.

Telefónica has been implementing an ambitious climate change and environmental strategy for more than ten years.

So much so, that it is a crucial part of how it operates, it purchases and it does business. It has set emission reduction targets validated by the Science Based Targets Initiative, which means these targets take into account that its activity should contribute to global temperature increases staying well under 2ºC. It is implementing a renewable energy plan, which requires its electricity consumption will be entirely generated by renewable energy sources by 2030, and it is implementing a far-reaching energy efficiency programme, which has allowed it to implement 139 energy efficiency projects in 2018 alone.

Thanks to this strategy Telefónica overachieved its three main objectives in 2018i:

In order for Telefónica to be able to set these ambitious targets, in a context of growing demand and accelerated technological development, it has had to change its way of doing business.

Consumption and carbon emissions in the telecom sector

The demand for telecommunications services has been growing for many years now. It is expected that IP traffic (data through telecom networks) will grow at a Compound Annual Growth Rate (CAGR) of 26% from 2017 to 2022.

The challenge from an environmental perspective is huge, because the telecom sector has experienced an increase in energy consumption of 30% and carbon emissions of 17% between 2010 and 2015.

An IEA (International Energy Agency) analysis shows different figures for electricity demand for the data transmission networks (fixed+mobile) in 2021 under two energy efficiency scenarios. A first scenario, assuming a moderate rate of improvement in energy efficiency of 10% per year (which is close to conservative estimates of historical improvements), and one assuming a more rapid rate of improvement of 20% per year (based on the historic rates achieved in well-managed networks in developed countries with high capacity utilisation). 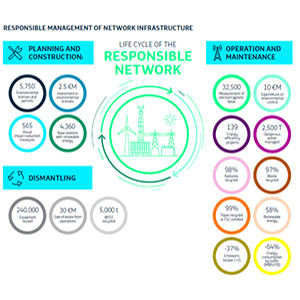 In other words, the way in which a telecommunications company operates and deploys its network has an enormous influence on its energy and carbon emission performance.

In Telefónica’s case, the growth of data traffic through fixed and mobile networks has increased threefold since 2015. In spite of this huge traffic growth, our energy consumption in absolute terms has been flat (-0.29% 2015-2018). This has been possible thanks to Telefónica Energy Efficiency Programme and its network transformation. Thanks to it, in nine years, we have saved more than 4,000 GWh, €553 million, and avoided 1.27 million tonnes of CO2 equivalen emissions.

The global initiatives include modernising our network to increase its efficiency, for example by replacing copper by fibre optic; power plants and heating, ventilation and air conditioning (HVAC) equipment renovation projects; cooling by using air from outside; shutting down legacy networks; implementing power saving features in the access network, and reducing fuel consumption by implementing hybrid stations. 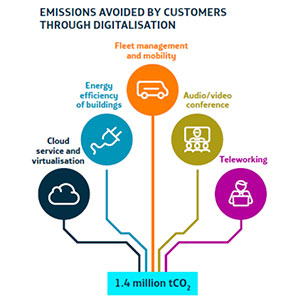 Digitalisation and connectivity are key instruments for dealing with the environmental challenges affecting society at large: climate change, water shortages, circular economy, pollution and loss of biodiversity. This new digital era is an opportunity for the process of transformation of the economy, business and society to be carried out while providing solutions to reduce the environmental impact. Telefónica is committed to reducing its own carbon footprint, but we also offer solutions to reduce our customers’ emissions.

Telefónica’s business strategy goes hand in hand with the digital revolution, which is why we provide services based on connectivity, the internet of things (IoT), cloud or big data. In all of these, we find environmental benefits. For example, with IoT services we make more efficient use of resources such as energy and water and with big data we are helping to improve traffic planning and air quality.

Connectivity is the foundation on which our business is built, with products such as broadband, fibre-optics and audio/video conferences making remote ways of working with less mobility, which enables the reduction of energy consumption, carbon emissions and air pollution.

These services reduce significantly the energy consumption and therefore the carbon footprint of our customers. In 2018 we avoided the generation of 1.4 million of tonnes of CO2. For each tonne that Telefónica emitted through its own activity we were able to avoid 1.2 tonnes in our customers.

For the growth of connectivity to be sustainable, telcos need to incorporate environmental targets into their business strategy. This means analysing different scenarios when planning the network transformation, not only from a connectivity requirement and revenue perspective, but also from an environmental perspective. It means taking long-term investment and legacy shut-down decisions in an environment where investors and customers are often looking for short-term performance and financial results.

For example, Telefónica in Spain took the brave decision some years ago to remove completely the old copper network and substitute it for fibre directly in the home of their customers (FTTHv). Fibre is 85% more efficient in terms of energy consumption per customer and enables the reduction of 50% of failures, among other customer-focused benefits.

The decision of dismantling completely the old network together with the new fibre infrastructure has allowed Telefónica to save 208 GWh of energy between 2016-2018 which has end up in 56.5 KtCO2 avoided between 2016-2018.

Telefónica has been a pioneer and, thanks to this, Spain is the first fibre country in Europe and third among the OECD countries which is having a huge impact in the development of the country.

Some voices in the financial sector have questioned whether an activity such as our network transformation should be eligible for a green bond, presumably based on the argument that we need to transform our network anyway to respond to the growing appetite for data traffic and speed. We respectfully believe that this reasoning is flawed, and put forward the following arguments:

The EU Proposal for a Regulation on the Establishment of a Framework to Facilitate Sustainable Investment proposes that an economic activity shall be environmentally sustainable where that activity complies with all of the following criteria:

The regulation seems to focus on two elements: the “substantial” character of the environmental benefit, and the assurance that the economic activity does not indirectly, also significantly harm the environment.

To what extent an activity has a “substantial” environmental benefit is the key element of this debate. The European taxonomy will help to set the technical criteria for determining whether an economic activity is environmentally sustainable for the purposes of establishing the degree of environmental sustainability of an investment.

In no way does the regulation indicate that the environmental sustainability of the economic activity should depend on whether this activity is considered as business as usual for the company concerned. This makes sense, as the BUSINESS AS USUAL argument seems to imply companies should only be allowed green financing when the environmentally sustainable activities they are proposing to finance would not have been financed without the green labelling.

For example, in Europe the energy sector issuers account for over 60% of green bond allocations, according to the Climate Bonds Initiative, and are using the proceeds for the transition from fossil fuels to renewable sources such as solar, wind etc… Shouldn’t this be considered also as BUSINESS AS USUAL as it is precisely the renovation of their core business?

Companies all over the world have started to understand that they need to incorporate a societal and environmental impact assessment to their business strategy. Many are taking the first steps to doing so and are finding that, despite their good intentions, the signals they are getting from the market push them towards short-term financial returns, rather than long-term sustainability considerations. Sustainable financing mechanisms are helping to generate a different environment.

Let’s make sure we all work towards incentivising companies to make long-term sustainability criteria an integral part of their business considerations, without compromising on the objective impact assessment requirements.