A Path of Roses and Thorns

Shorter delivery periods, increase in the number of companies involved, mandatory external verification... These are the implications and challenges of the new law on non-financial information.

Shorter delivery periods, increase in the number of companies involved, greater specification of the contents, mandatory external verification… Despite the additional effort required by the new Law 11/2018 on the disclosure of non-financial information, one of the most demanding transpositions of the European Directive 2014/95/EU, the regulation has been received very positively as it has opened a new opportunity for raising the importance of intangible assets belonging to companies.

With the purpose of clarifying doubts and to share opinions about the new requirements, representatives of the Spanish National Securities Market Commission (CNMV in its Spanish initials), NGOs, trade unions, investors and companies have met at the “III Conference on Non-Financial Information”, organised by the consultancy firm Sust4in in Madrid.

“Entities have to include information on social and environmental issues, the protection of human rights and measures in the fight against corruption and bribery”, explained Eduardo Manso, Director of the Corporate and Financial Reports Department of the CNMV, during his speech. In addition, he indicated, “this information can be included either as a section within the management report itself, or published in a separate report.”

“Separating non-financial information from the meeting agenda is another example that the legislator gives importance to this topic”, – Daniel Vázquez, a lawyer with Dentons

Among the most significant new features introduced by the new law, Manso highlighted the following: 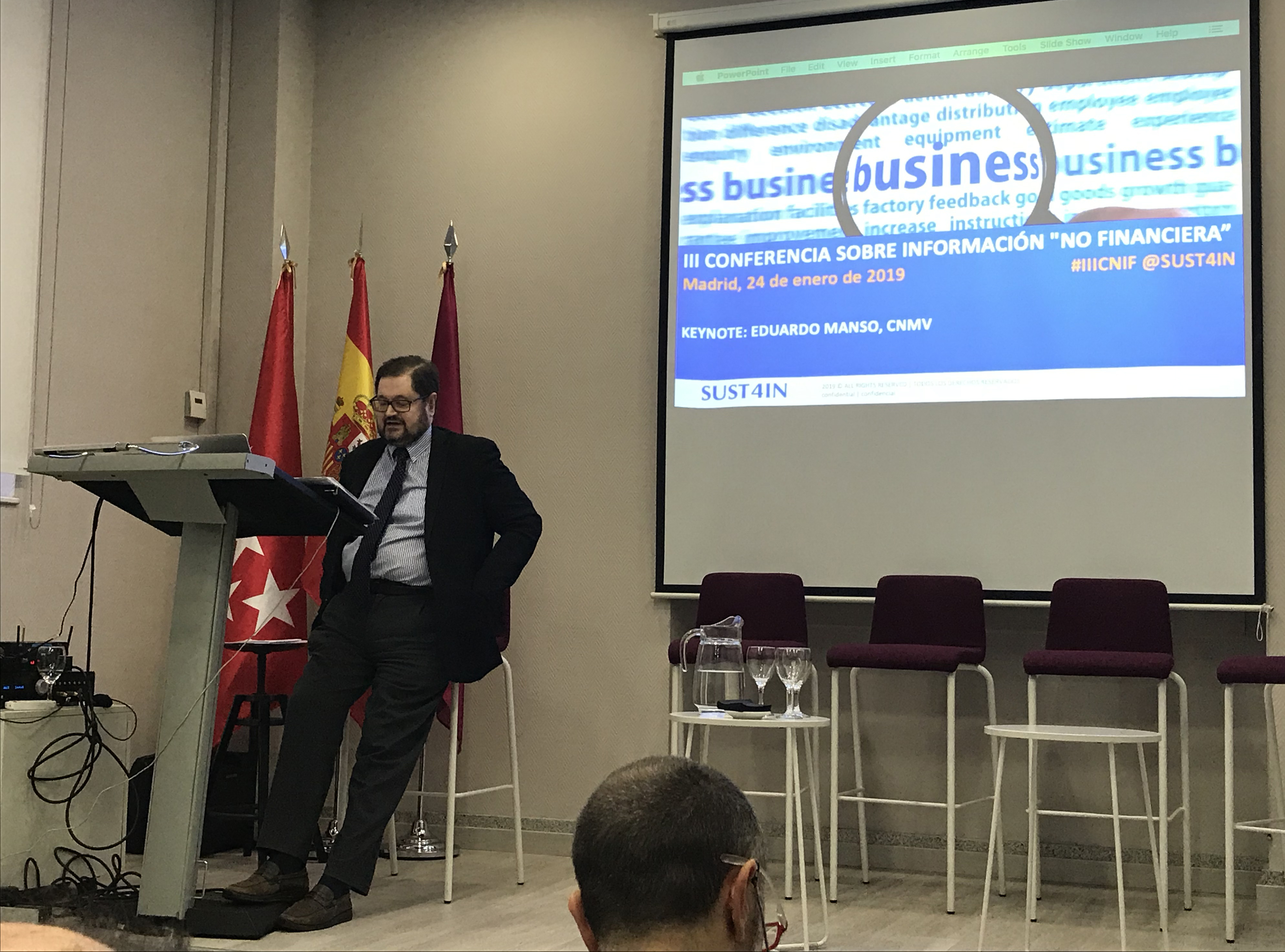 A greater scope: the new law is mandatory for companies which health more than 500 workers, but it will include those that have more than 250 employees within a period of three years.

Mandatory external verification: the law requires entities to have their non-financial information to be reviewed by an independent verification services provider.

Approval requirements: another new feature is that entities must submit the non-financial information as a separate item on the meeting agenda for approval by the shareholders.

Greater specification of the contents: the law increases the amount of content and the quality of the breakdowns. As another new characteristic, Eduardo highlighted that the new requirement obliges entities to include tax information on a country-by-country basis.

“The regulation lacks penalties for non-compliance with it, but if complaints are presented for the falsification of documents, there may be a fine from the ICAC” – Carlos de Miguel, lawyer with Uría Menéndez

WELL-RECEIVED BY THE SOCIETY 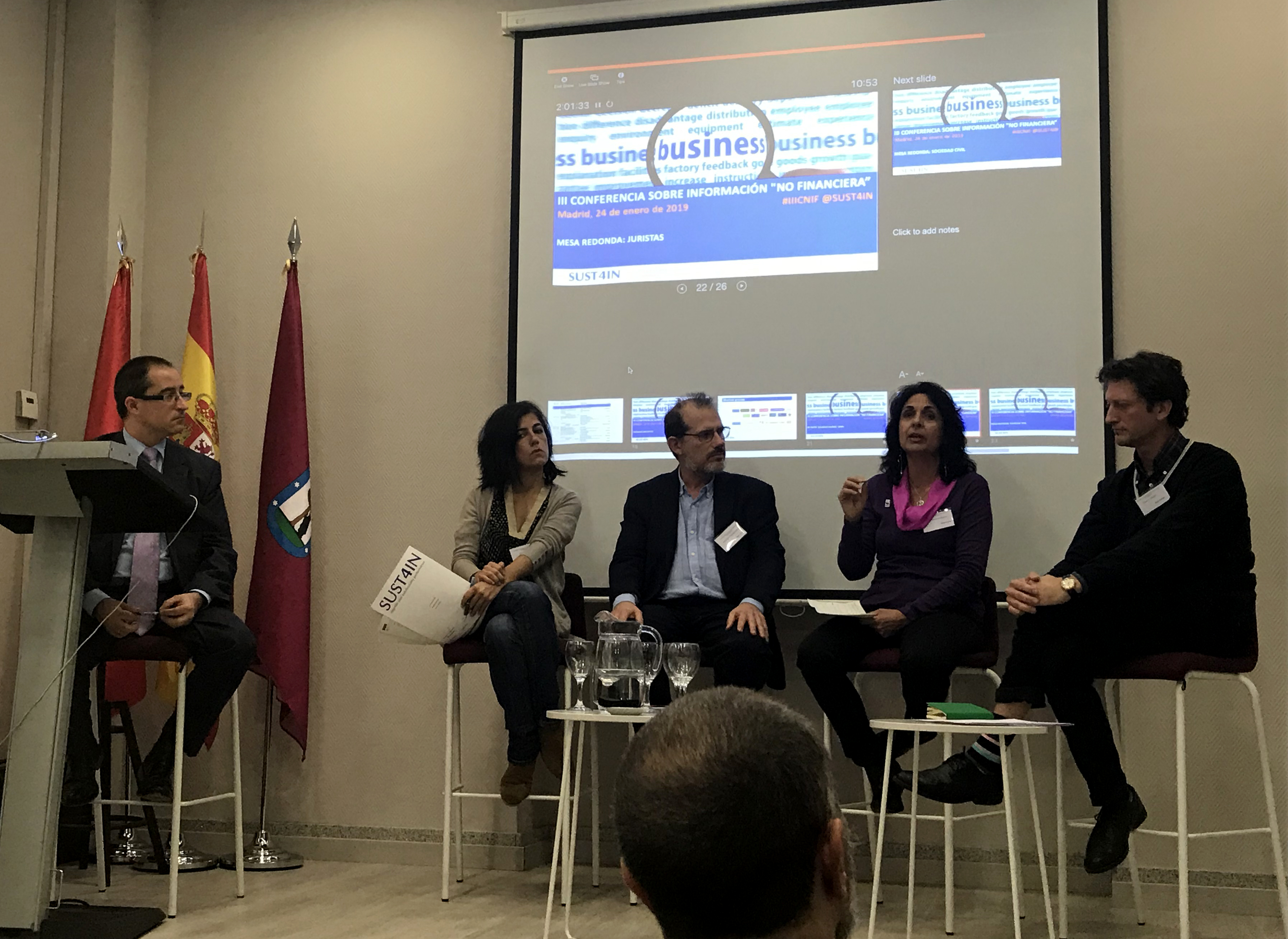 “Despite being content about the new regulation and receiving it with joy, there are still many unknown factors”, said Cecilia Carballo, Director of the Greenpeace Programmes, adding, “We expect progress to be made in the mandatory verification of the non-financial information in order to promote the quality of the reporting.” José Carlos González, Federal Manager for Sustainability of CCOO spoke along the same lines: “We are battling against ambiguity in sustainability issues and what we want is specification in order to have clear, relevant and comparable information”.

A similar view was shared by Orencio Vázquez, Coordinator of the Observatorio RSC: “What is intended with this new law is to enable comparability, this is the main objective.” Meanwhile, Mar Asunción Higueras, Head of the Climate and Energy Programme for the WWF, added, “This new law marks an important step as citizens, consumers and investors will be able to find out the degree of commitment and corporate responsibility.”

“This new law marks an important step as citizens, consumers and investors will be able to find out the degree of commitment from the companies” – Mar Asunción Higueras, from WWF

WHAT IMPLICATIONS DOES THIS HAVE FOR COMPANIES?

The founder and director of SUST4IN, Marcio Viegas, said, “The new law presents new features which will even apply to companies which have been publishing sustainability reports for years.” This is the case of Ferrovial. According to Ana Peña, Head of the Environment, Climate Change and Quality of the Spanish infrastructure firm, “There won’t be major changes due to the law. However, it has meant that we have had to make a great effort to integrate the Task Force recommendations, because it requires that issues are addressed throughout the annual report in a transversal way.”

Telefónica is another Spanish company which has a long history in publishing its Sustainability Report. Gema Esteban, Director of Investments and ESG Analyst, explained that the company has already been reporting most of the indicators required by the law, “what it has meant for us is that the periods have been shortened.” The Director added another significant change regarding the requirement for approval from the Board of Directors, “this is something that didn’t happen before”, she clarified. In addition, the company has committed to draw up an integrated report: “It is logical that the non-financial issues should be contained within the management report, as they are equally important and have helped us to achieve these results”, concluded Esteban. 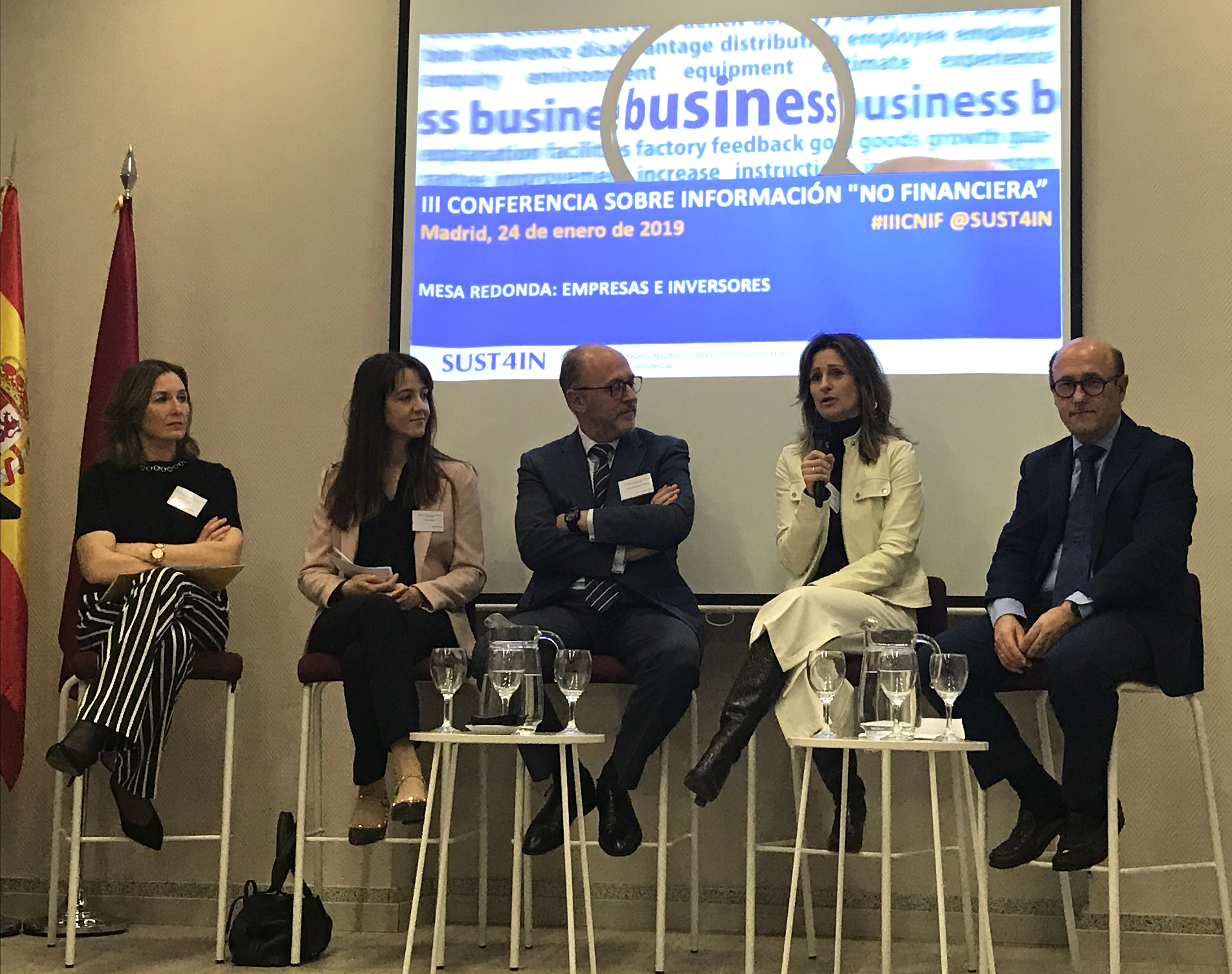 “It is logical that non-financial issues should be contained within the management report, as they are equally important and have helped us to achieve these results” – Gema Esteban, from Telefónica

Bankia has made the same decision. David Menéndez, Director of Corporate Social Responsibility of the Bank, explained that they have also opted for an integrated memory “in which sustainability is not like a fungus stuck onto a strategic plan, but it is present in all the parts of the report”.

According to Elena Blanco, Manager of Sustainability/Corporate Responsibility for Enagás: “What this directive does is to put non-financial and financial information in terms of deadlines, levels of approval at the same level, the law even establishes minimum contents that have to be verified.” 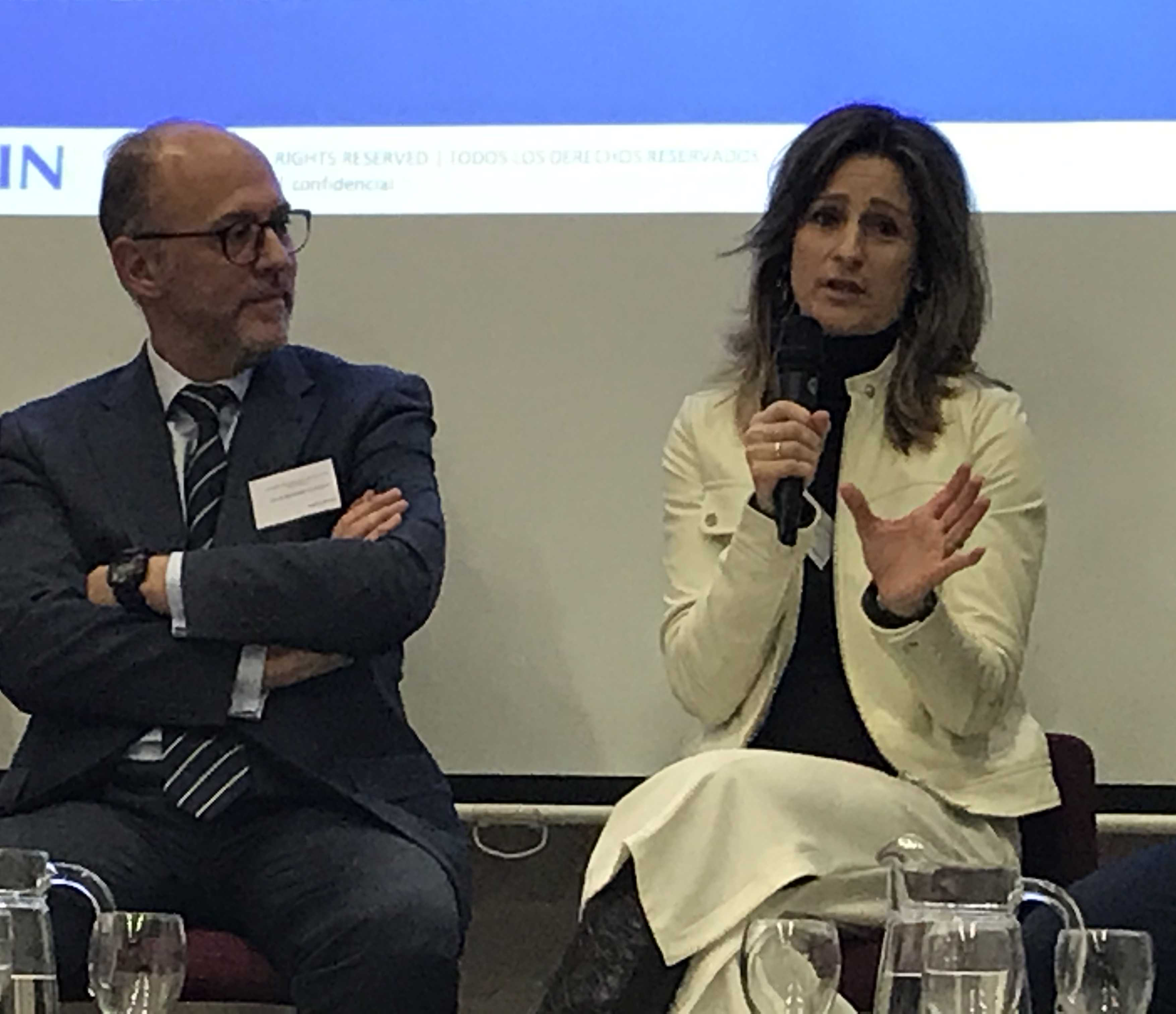 Francisco Javier Garayoa, CEO for Spainsif, a non-profit association that promotes sustainable investments, shared three key recommendations with regards to the information contained in the report, that support institutional investors. He stated, “Above all, it shouldn’t be excessive, because this generates confusion, and that it should be well-organised. Additionally, the information has to be of quality, with very specific indicators. And, finally, that it is homogeneous and comparable.”

To achieve these objectives, the Telefónica representative presented some measures that have decided to carry out this year: “We are working to develop a much more visual report and it will also be available in web format”. With this, the company is intending to enable “the user to access the content in a much faster way, with all the possible links to more detailed information”, Gema added.

“A common guide would facilitate the comparability of reports” – Francisco Javier Garayoa, from Spainsif

These changes were applauded by the Spainsif CEO, who emphasised the importance of working on a common guide which “provides a very quick overview of the information that the investor wants and allows them to access additional information if they are interested in gaining a more in-depth view. If this type of model were achieved”, he continued, “It would facilitate the comparability and would provide valuable information”.

In particular, the value of non-financial information was the most highlighted aspect by the intervening parties during the day. As Elena Blanco, from Enagás well stated: “This is an issue that without question has to be done, it has to be complied with, but it is also an opportunity. It is an opportunity to increase transparency and generate trust in our stakeholders as well as reinforcing the bond that we have with each and every one of them.”