A brief overview from DigiWorld 2011 event: Will the device be king?

Mid November, I attended The DigiWorld Summit 2011 where an overview of the key factors for the future Internet world was presented, focusing on the role of devices, networks, content and user... 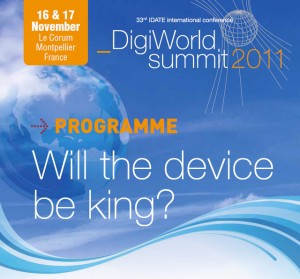 Mid November, I attended The DigiWorld Summit 2011 where an overview of the key factors for the future Internet world was presented, focusing on the role of devices, networks, content and user behaviour. Different views on Net neutrality debate were also covered. Here is a brief overview.

The DigiWorld Summit 2011 was held last November, 16th & 17th in Montpellier. A great number of representatives of the ICT sector attended the event and more than one hundred senior executives from the sector and Regulatory authorities presented their views.

The key points highlighted by the regulators were:

For Neelie Kroes, Vice President for the Digital Agenda, European Commission, in the Digital Single Market, infrastructure, devices and content are key. She focused her video intervention on three topics:

Jean-Ludovic Silicani, President of ARCEP, the French Regulatory Authority, gave, in his intervention, a very interesting overview of fibre investment plans in France:

The key issues addressed by Nicolas Curien, Commissioner ARCEP in his intervention were:

In relation to other interventions, some topics can also be outlined:

Idate and several companies stressed the key role of the devices in the future, but there was a general consensus that the whole Internet ecosystem is key, not only the devices. Infrastructure and content play an important role as well. According to a survey held by IBM, consumers search first the service then the device.

There was general consensus on the exponential data traffic increase, mainly due to video and on the need for new business models. Only Scott Marcus from WIK raised some doubts about it. Traffic management was referred several times as a necessary tool to avoid congestion and provide better Quality of Service (QoS).

Most operators present there had a similar approach to the problem, upholding a level playing field along the value chain. It was highlighted the excessive regulation applicable to operators while Over The Top players do not have this constraint. Content providers and operators must act in “coopetition”.

Several operators highlighted the 11 points presented to Commissioner Kroes in the Second CEO Roundtable on broadband investment to sustain Internet growth last July, 13th 2011 to give an answer to this problem. Among them it was outlined the need for sustainable business models, based on voluntary commercial agreements and traffic management to avoid congestion and provide better Quality of Service.

As usual, this forum presented interesting issues currently under debate and it was a good occasion to listen to the experts of these areas.