16 years of Energy Efficiency at Telefónica

For the World Energy Efficiency Day, we review our achievements and great challenges that we will continue facing in order to be a better company and go on adding value to society.

Telefónica has come a long way in its efforts to promote energy efficiency and best practices. For the World Energy Efficiency Day, we review our 16 years of work full of achievements and great challenges that we will continue facing in order to be a better company and go on adding value to society.

In 2005 we began this journey with the participation of four LATAM operators, where we created the first best practices manual that included the first 25 initiatives of an exciting journey in which we have reached, up until now, a total of 150 initiatives. With the vision of establishing a global company project, we created the Climate Change Office, where we set the first public goals with a vision for 2015 (base 2007), based on the ratio of energy consumption per equivalent access and per employees. The first one, it is referred to the energy consumption in technical sites with the clients of the different services offered by Telefónica (Fixed, Mobile, Broadband, etc.). The second one, it is referred to the consumption of our offices by the number of employees, these first objectives have been a gateway to the sharing of best practices among the operators of the Telefónica group.

In 2010, this journey towards energy efficiency had an important milestone with the organization of the 1st Global Workshop in Madrid with the manual of 100 energy efficiency initiatives as the key. This Workshop helped us to establish new agreements that would support us promoting energy savings. Among the main agreements reached, from then until 2015, we highlight the following:

In 2014, from the Global area, we approved the dedication of Global CapEx in order to support the implementation of energy efficiency projects in each operator of the group. A year later, we managed to create the Global Energy Center where there is a responsible in charge, in each of the group’s operators, who works to promote the implementation of energy efficiency initiatives locally.

From this moment on, our priority was to establish new Energy and Climate Change Goals with a vision for 2020/2030, continuing with the signing of agreements, with a guarantee of savings, such as the Energy Efficiency Service (SEE) or the disruptive model called Energy Savings as a Service (ESaaS), where third parties implement energy efficiency solutions with their CapEx and we pay for the project with the savings generated.

Comparative studies of electricity consumption in the network

We have managed to stabilize energy and electricity consumption, reducing it by 2.4% and 1.0% respectively, despite the increase of the traffic managed by our networks in more than 5.1x.

In recent years, we have increased the use of renewable sources for our electricity consumption, going from 20% in 2015 to 87.5% in 2020, thanks to the purchase of certificates of renewable origin in Europe, Brazil and Peru. 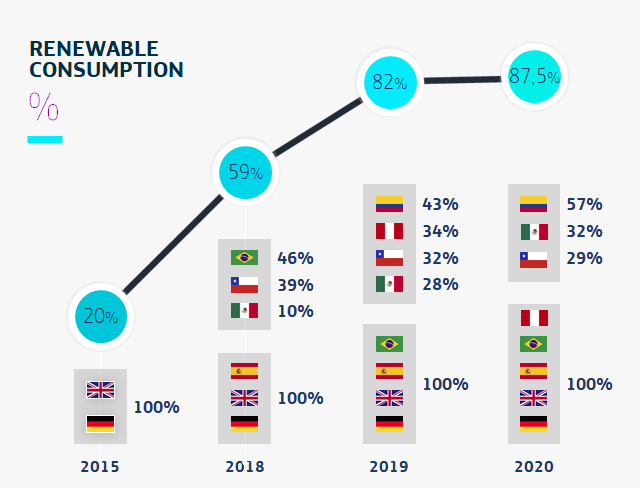 Since 2014, we have been on the A list of the CDP ranking (non-profit organization specialized in environmental impact), achieving, in 2020, to celebrate 7 consecutive years. We have also been recognized twice at the GSMA Glomo Awards, first, in 2016 with our “Energy Efficiency Program” and then, in 2019, with the “Energy Renewable Plan” strategy.

A path that we began 16 years ago, full of great opportunities and achievements and on which we will continue working tirelessly to promote the company’s value commitment to achieve a better world.