Álvarez-Pallete presents a new programme for Telefónica focusing on growth

Álvarez-Pallete presents a new programme for Telefónica focusing on growth 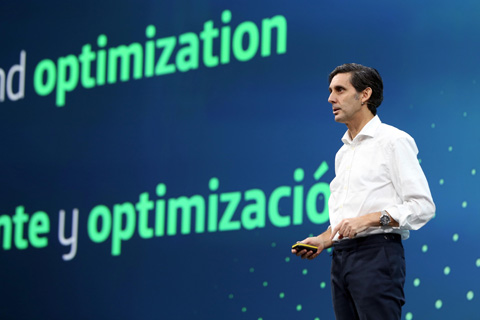 Madrid, 29 November 2018.- Telefónica’s Chairman and CEO, José María Álvarez-Pallete, today inaugurated, in the Magic Box of Madrid, the meeting to present the new internal company programme for the 2019-2021 period to almost 900 executives. The more than 120,000 Telefónica employees around the world were able to follow the event via streaming.

The company’s new internal programme was created to grant a new boost to the company following “We Choose It All”, in force for the past three years. “A programme which has made us stronger,” said Álvarez-Pallete, as the company has seen growth in terms of revenue, OIBDA, customers and margins, investing record numbers to deploy and digitalise a next-generation network, as well as being able to reduce company debt by close to €10 billion since June 2016 and keep an attractive remuneration for the shareholders.

“And yet,” said Álvarez-Pallete, “it is not enough, and we are not satisfied. We must aim to capture greater growth for all our stakeholders”. He explained to his team that the telecommunications industry faces challenges such as a regulation not adapted to the 21st century, loss of relevance of the industry, and the intensity of investment required to deploy 5G and fibre. “We have already done much of our homework. We have transformed and digitalised our network, and applied Artificial Intelligence to our platforms, which will be essential for capturing growth opportunities” explained Álvarez-Pallete.

Opportunities such as services over connectivity, Big Data, and the new wave of Cognitive Intelligence, in which Telefónica is in an advantageous position to capture them, and which “can be accelerated if the company focuses on digitalisation, in simplification through the management of assets with a focus on increasing the return on invested capital (ROCE)”. The company, said Álvarez-Pallete, has been able to identify, for each market it operates in, the significant growth opportunities that it will focus on in the coming years.

Telefónica’s “Reconnect” programme ambition of growth can be summarised in five key areas which the Chairman explained to executives:

Telefónica’s Chairman & CEO finished his speech by saying he was optimistic despite the complex environment that telecommunications industry is going through. “Whether the glass is half empty or half full isn’t important”, he said. “The only thing that matters is that it can be refilled”.

He also referred to the importance of ethical discussions before the challenges and opportunities offered by technology. The new programme once again focuses on people, and emphasises they are who must give meaning to technology, and not vice versa. Álvarez-Pallete concluded his presentation by stressing, “we want to make our world more human, connecting people’s lives“, as one of the company’s missions.