Madrid, 13th May 2021. Telefónica recorded a net income of €886 million in the first three months of 2021, 118.3% more than in the same period of the previous year. These results show the resilience of the company’s business model and the effectiveness of the management, focused on cost reduction and stable operating cash flow. They also reflect the lower impact of the effects of the pandemic and the evolution of exchange rates compared to the end of 2020. Earnings per share totalled €0.15 in the first three months of the year, up from €0.06 in the same period last year.

“These results reflect the success of our strategic plan and Telefónica’s ability to execute and to achieve sustainable and profitable growth, driven by our technology businesses and the deployment of the best networks and services,” said José María Álvarez-Pallete, Chairman and CEO of Telefónica.

The first quarter figures put the company on track to meet the financial targets set for 2021, consisting of a stabilisation of revenues and operating income before depreciation and amortisation (OIBDA) and a return to a normalised level of CapEx over revenues of up to 15%.

In this regard, both revenues and OIBDA are already expressing this progressive stabilisation, as they reflect a sequential improvement for the third quarter in a row. In the first quarter, the Group’s revenues amounted to €10,340 million, 9% less than in the same period of 2020, but only 1.3% lower in organic terms, a figure that shows a smaller decline than in previous quarters. 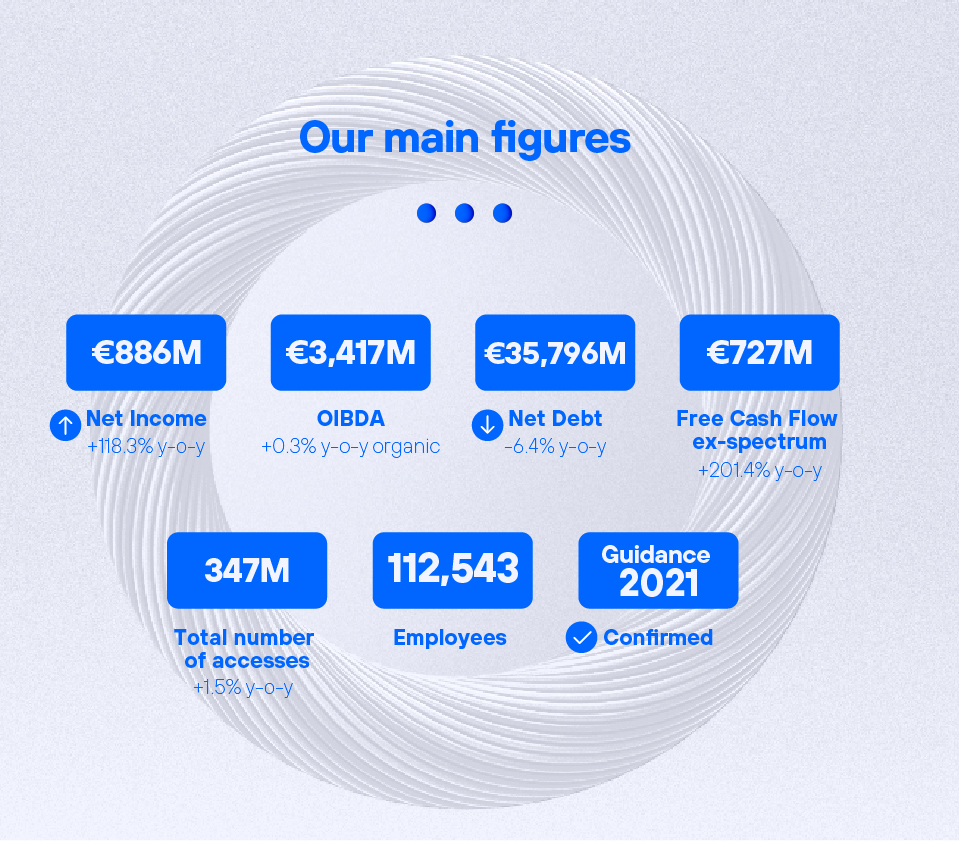 In addition, the efficiency achieved thanks to the company’s management, with operating expenses down 9%, makes it possible for OIBDA to grow 0.3% in the first quarter in organic terms.

The first quarter figures also demonstrate Telefónica’s proven ability to generate cash flow. Excluding spectrum payments, cash generation in the quarter amounted to €727 million, more than 200% up compared to the first quarter of 2020. This cash, however, was largely earmarked for payments made following spectrum auctions in the UK, Chile and Spain, so the figure for the first quarter was €33 million, 85% lower than a year ago.

The improved figures also enabled operating cash flow (OIBDA-CapEx) to increase organically by 0.1% and decrease by 38% in reported terms, also as a result of the spectrum auctions, which represent a total of EUR 694 million.

Another milestone in the first quarter was the growth in the various revenue margins, a performance that demonstrates the company’s management capacity and the generation of efficiencies it is fostering. The OIBDA margin on revenues increased to 33% and the operating cash flow margin on revenues improved to 20.1%.

The first quarter figures also reinforce the Group’s commitment to reduce debt. At 31 March, net financial debt stood at €35,796 million, 6.4% less than a year earlier. Once the transactions pending completion materialise, debt will be reduced by approximately €9,000 million. With this reduction, it will stand at around €26,000 million, half of the amount of mid-2016.

At the same time, Telefónica maintains a solid liquidity position following refinancing activity amounting to €3,022 million in the quarter. The company has liquidity of close to €20,000 million.

Infrastructure quality has continued to be a priority for Telefónica at the start of 2021. This quality translates into more and happier customers. Telefónica’s total access base grew to 347.4 million, 1.5% more than at the end of the first quarter of 2020, with clear growth in the high-value user segment thanks to the Group’s differentiated infrastructures. Retail ultra-broadband (UBB) accesses rose by 8.2% in the last year and fibre-to-the-home (FTTH) accesses by 23.5%, representing 53% of total retail broadband customers. Increased customer satisfaction is reflected in a Net Promoter Score (NPS) improvement to a record 27% in the four main markets.

The company ended the first quarter with 137.1 million premises passed with fibre, 6% more than a year ago, of which a total of 63 million were over its own networks. In relation to the fibre network, Telefónica Infra, the company in charge of developing the company’s infrastructure, announced in the quarter the creation of two new wholesale vehicles for the deployment of fibre in Brazil and Chile, which join the joint venture created with Allianz in Germany, presented last October.

Execution of the Strategic Plan

The five pillars underpinning Telefónica’s strategy are also progressing well. In terms of the main markets, Spain remains the European leader in fibre rollout, with 5G coverage reaching 80% of the territory, while in the UK the merger of O2 and Virgin Media is progressing as expected, after the UK regulator (CMA) gave preliminary approval for the deal in April. In Brazil, the acquisition of Oi’s mobile assets is also on track, and in Germany the company closed during the quarter a national roaming agreement with 1&1 Drillisch which guarantees a long-term revenue stream.

At Hispam, the improvement in the operating model is becoming increasingly evident. Maximising operating cost efficiencies and investment are enabling a strong increase in operating cash flow in the region.

Telefónica Tech reinforced its growth story in the first quarter with a 25.1% increase in revenues to €166 million, while continuing with the services migration process and the transfer of businesses and assets.

In this way, Telefónica Tech is making progress in its objective of expanding the company’s perimeter, which will be extended over the coming months. In addition, it continues to rely on its operational and commercial capabilities, its differential assets and agreements with key partners to offer its services to the group’s more than 5.5 million B2B customers.

As for Telefónica Infra, along with the creation of the aforementioned wholesale vehicles, its main success during the first quarter was the sale of Telxius’ tower business to American Tower Company for €7.7 billion, a deal at record multiples and a benchmark for the sector.

Finally, the fifth strategic pillar, which seeks to simplify and digitise the current operating model to a greater extent, also bore fruit during the quarter. Digitalisation of processes accounted for 79%, while digital sales grew 37% in the four key markets and now represent 35% of the total. In other words, up to March, nearly 30 million customers, an increase of 12%, have opted to use digital channels across the group.

Another highlight of the first quarter was the placement of a hybrid sustainable bond, the first of its kind in the sector and a further demonstration of Telefónica’s commitment to sustainable development. The amount of this operation, which reached €1,000 million, allows the company to extend the scope of its financing to social projects in Spain, Germany and Brazil, while giving continuity to environmental initiatives in line with the green bonds issued in 2019 and 2020, with which the Group was also a pioneer. 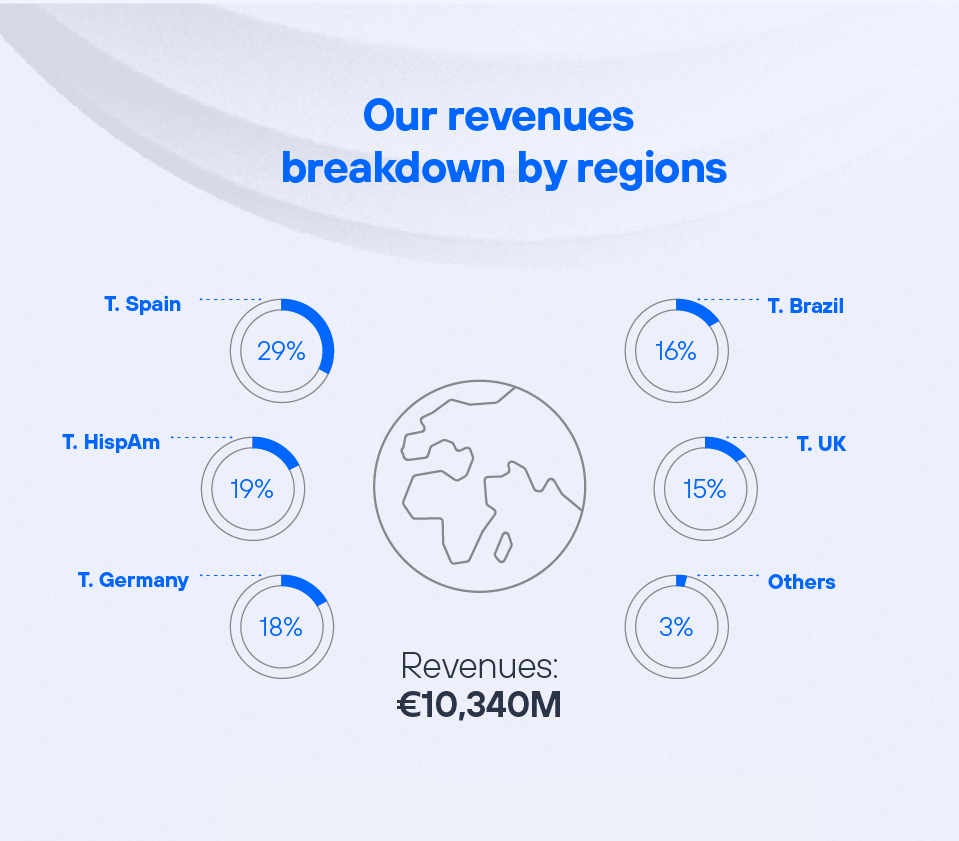