Telefónica’s net income increased by 8.6%, reaching 1.739 million euros in the first half of the year

Telefónica’s net income increased by 8.6%, reaching 1.739 million euros in the first half of the year 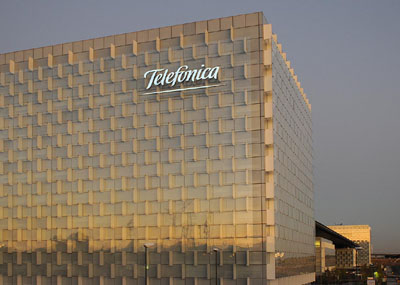 “Telefónica second quarter results showed an improvement in the y-o-y organic growth trends of revenues, OIBDA and OIBDA margin expansion. Moreover, net debt decreased for the fifth consecutive quarter thanks to the strong free cash flow generation (€998 million), which grew by 55% excluding spectrum payment in the UK. These results allow us to reiterate our guidance and dividends for 2018.

Our value offer to customers remains key, and we continue investing and expanding our ultrabroadband networks. As of June, we have 47.3m premises passed with proprietary FTTx/cable network, +15% y-o-y. LTE coverage grew by 6 p.p. to an average 73% in all our footprint.

Lastly, we remain convinced that the key levers to a sustainable digital future lie with our capacity to radically transform our networks, create a customer-centric digital ecosystem, establish digitalisation as the cornerstone for generating efficiencies and remain at the vanguard of cognitive intelligence”.

Telefónica today presented its results for the first half of the year, which stand out for the acceleration of growth in its main variables and which allow the company to reiterate the targets and dividend announced for 2018. Also relevant is the annual growth of free cash flow (+ 32.7%), the net debt reduction (-10% vs. 1H17) and the financing activity of the semester, exceeding €10,800M.

Reported April-June results were affected by net positive impacts in OIBDA (€225m) and negative impacts in net income (-€60m), mainly associated with a favourable court ruling in Brazil, and the partial goodwill impairment and tax asset reversal in Mexico.

In the second quarter, the exchange rate evolution reduced y-o-y revenue growth by 8.8 p.p. and that of OIBDA by 10.7 p.p. (-8.7 p.p. and -10.0 p.p. respectively in January-June). However, the negative impact of the depreciation of currencies at OIBDA level decreased significantly in terms of cash flow generation by reducing the payment in euros of CapEx, taxes and interests.

CapEx for the first half of 2018 amounted to €3,932m (+12.1% y-o-y, +5.5% organic), including €595m from spectrum, and continued to be focused on the radical transformation of networks (deployment of ultrafast networks, network virtualisation, simplification and digitalisation of processes and systems). Operating cash flow (OIBDA-CapEx) totalled €4,170m in the first half of 2018, decreasing by 10.7% y-o-y, affected by the aforementioned acquisition of spectrum in the United Kingdom. In organic terms operating cash-flow grew by 2.4%, reflecting good business performance. Free cash flow reached €1,548m in the first half of the year (-4.8% vs. the same period in 2017), thus rising by 32.7% y-o-y excluding spectrum payments.

During the first half of 2018, the financing activity of Telefónica increased to approximately €10,814m equivalent (without considering the refinancing of commercial paper and short-term bank loans) and focused on maintaining a solid liquidity position, and refinancing and extending debt maturities (in an environment of low interest rates). Therefore, as of the end of June, the Group has covered debt maturities for the next two years. The average debt life stood at 8.95 years (compared with 8.08 years in December 2017).

Telefónica progressed in the development of its four platforms to drive customer-center digitalisation. The first platform, the physical assets, guarantee an excellent connectivity over an increasing convergent, flexible, capable and efficient network.

The access base of Telefónica Group stood at 357.5m at June 2018 (-1% y-o-y) and increased vs. March 2018 by 546k accesses, supported by intense commercial activity focused on high-value customers. Also, the quality of the customer base continued improving, after average revenue per access growth accelerated in the quarter to 3.0% y-o-y organic (+2.9% in January-June) and average life per customer increased following a reduction in churn levels (-0.1 p.p. y-o-y).

Fiber in Spain reached 20.2m premises passed in June and the industrialisation of the deployment process enabled the extension of the fiber network with the same quality but in a more agile and efficient manner in Latin America. In Hispam, FTTx/cable coverage amounted to 8.2m premises passed in June (+51% y-o-y) and 18.8m in Brazil. Overall, FTTx/cable network coverage reached 78.5m premises passed (47.3m of own network, +15% y-o-y). LTE coverage stood at 73% in June (+6 p.p. y-o-y; 92% in Europe and 67% in Latam) supporting LTE traffic, which already accounts for the 62% of the total traffic. At the same time, 4.5G deployment in Germany, Brazil, Mexico and Colombia, use of Massive MIMO, spectrum use optimisation and improvement in the speed of access, shows the progress towards 5G.

Organic growth: The average exchange rates in 2017 are assumed, with the exception of Venezuela (results from 2017 and 2018 at synthetic exchange rate upon the close of each period), considering a constant perimeter of consolidation. This excluded the effects of the accounting change to IFRS 15 in 2018, write-downs, capital gains/losses from the sale of companies, tower sales, restructuring costs and material non-recurring impacts. CapEx excludes spectrum investments.

Telefonica España main financial figures presented y-o-y growth in the second quarter (+0.3% in revenues and +0.2% in OIBDA) reflecting the positive business performance, which was partially offset by the negative impacts of the migration of Yoigo and Pepephone wholesale/MVNO customers, whose effects will no longer be relevant in 2019), and the regulatory impact relating to the mobile interconnection rate cut.

Telefónica Deutschland delivered a solid set of results, fully on-track with FY 2018 guidance, on successful synergy capture and strong operational momentum in a dynamic but still rational market. Since June 5th 2018, the renewal of the O2 Free portfolio (including the “boost” option to double data volumes for +€5 per month) and the launch of O2 Free Connect (allowing to share high-speed data volume for up to 10 devices) further supported data growth and ARPU-uplift.

CapEx in the first half of 2018 totalled €424m and decreased by 2.3% y-o-y, still benefiting from efficient CapEx management and incremental synergies of ~€25m, while network integration, the subsequent LTE rollout and the strategy to bring fibre to the backhaul progressed according to plan. As such, operating cash flow (OIBDA-CapEx) was up 3.2% y-o-y to €458m in H1 18.

Telefónica UK continued to deliver a good set of results, growing financials in the second quarter of 2018, despite regulatory impacts and accounting changes. The Company remains UK’s favourite mobile network carrier with total base more than 32m customers and continues to lead market loyalty with the lowest churn. Customers continued to spend more with the Company, reflecting continued focus on great customer propositions and experiences.

In the second quarter of 2018 Telefónica Brasil accelerated organic growth in OIBDA and showed margin improvement. Telefónica Brasil’s differential assets and the continued focus to grow in value (new record in fibre connections and y-o-y growth in contract net additions) more than offset the decrease in fixed voice revenues and the worse macroeconomic environment in the quarter, that mainly affected prepay revenues.

Quarterly revenues (€2,522m; €5,227m in the first half) increased by 0.5% y-o-y (+2.0% excluding regulation; +0.8% in the first half, +2.5% excluding regulation). OIBDA reported in the quarter was positively affected by €485m associated with the favourable court ruling related to the exclusion of  the state tax on goods and services (ICMS) from the PIS/COFIN tax base (Programa de Integração Social/Contribuição para Financiamento da Seguridade Social), as well as to contingencies amounting to -€106m. OIBDA stood at €1,275m (€2,257m in the first half) and increased in organic terms (excluding the aforementioned impacts, the headcount restructuring, the accounting change to IFRS 15 and the exchange rates impact) by 7.1% y-o-y in the quarter (+5.8% y-o-y in the first half) with an OIBDA margin expanding y-o-y by 2.2 p.p. to 36.5% in organic terms (36.3% in the first half, +1.7 p.p. y-o-y).

CapEx in the first half amounted to €892m (+17.2% y-o-y, as a result of phasing of investments throughout the year), allocated mainly to the fibre and 4G networks expansion. Thus, operating cash flow reached €1,365m in the first half of the year, decreasing by 2.6% in organic terms.

During the second quarter, Hispam Sur maintained solid growth levels (+8.7% in revenues and +8.8% in OIBDA) with a noteworthy trend improvement in Chile (return to growth in revenues and OIBDA) and in Peru due to a better commercial activity in contract, pay TV, fibre and the savings achieved from efficiency measures and digitalisation.

CapEx amounted to €553m at June (+7.9% y-o-y), allocated primarily to the fibre network deployment and the improvement and expansion of mobile networks. As a result, operating cash flow (OIBDA-CapEx) amounted to €471m in January-June (+12.0% y-o-y).

Hispam Norte’s quarterly figures remained affected by regulatory impacts and a greater competitive intensity in prepay in Mexico. Nevertheless, it is worth highlighting the positive commercial results both in contract and LTE within the mobile business, as well as in broadband and pay TV in the fixed business.

Revenues in the second quarter (€1,027m; €1,998m in the first half) remained virtually stable (-0.4%; -1.3% in the first half), improving the y-o-y trend vs. the first quarter by 1.7 p.p. boosted by a better performance in Colombia, Central America and Ecuador. Excluding the regulatory impact, operating revenues would have increased by 1.5% y-o-y (+0.8% in the first half). OIBDA amounted to €176 in April-June (€434m in January-June), a 2.8% decrease vs. the same period of the previous year       (-5.1% in the first half), affected by the regulatory impact in Mexico, although the return to growth in Colombia is particularly noteworthy (affected by €9m associated with capital gains from the sale of real estate assets). Regulation dragged y-o-y growth by -7.9 p.p. in the quarter and by -8.1 p.p. in the first half. Additionally, in the second quarter a partial write-off of the goodwill allocated to T. Mexico of €108M has been recorded (without any impact at the country level). The OIBDA margin was 17.1% in the quarter (-0.7 p.p. y-o-y; 27.1% in the first half, -1.1 p.p. y-o-y).